Picket exclusive: 20 artifacts from the CSS Georgia are now on display at the National Civil War Naval Museum. Read all about them!

Serving on the Confederate ironclad CSS Georgia wasn’t a peach of an assignment. The vessel was too underpowered to move and needed constant pumping so it wouldn’t sink. Sailors, meanwhile, drilled and labored in Savannah’s brutally hot environment. And they never saw any action – at least the combat kind. Visitors to the National Civil War Naval Museum in Columbus, Ga., are able to view artifacts that speak of weaponry, diversions and discipline for those who served on the floating battery, which was scuttled by its crew in December 1864 when Sherman’s army neared the city.

The U.S. Navy -- via the Naval History and Heritage Command -- recently loaned and shipped more than 20 conserved artifacts to the museum. Officials expect more shipments in the years ahead. (Picket photo at left shows propeller in foreground, with shaft just beyond)

Most of the ironclad’s wreckage was removed a few years back as part of the U.S. Army Corps of Engineers’ deepening of the Savannah River to make room for larger tankers.

Thousands of artifacts underwent treatment at Texas A&M University, which shipped them to the Navy Yard in Washington, D.C. for storage.

The Navy has been in contact with museums over possible loans regarding the CSS Georgia, but the National Civil War Naval Museum has been the only one to sign on thus far, officials said.

Because the remains of the CSS Georgia were in a river that swept all kinds of manmade items downstream, it’s impossible to know how many artifacts pulled up during the project date to the Civil War. But, ostensibly, most do.

The Civil War Picket received the following inventory from the Naval History and Heritage Command and used information from an archaeological report on the project and other sources to describe the items that are now in Columbus.

All photos are courtesy of the National Civil War Naval Museum except where noted.

Leg irons: 15.5" x 5.0", 1.88 pounds
A few sets of these encrusted devices were recovered from the wreck site, likely used to discipline sailors who got into trouble on or off shore. 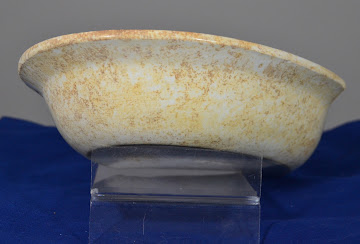 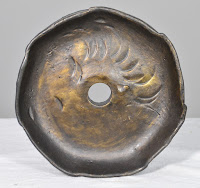 The sabot, designed to ensure an artillery shell was in the proper position in the barrel, was described this way in the final report on the project:

“The shallow copper saucer, bowl or basin appearance of the aft face of a Brooke copper ratchet disc sabot. Interestingly, this is a spent or fired sabot indicated by the grooving on its exterior side. The hammer marks may have been a result of fitting the sabot onto the shell prior to firing.”

Colorless bottle, partial with broken neck: 6.0" x 1.75" (diameter), 0.5 pounds -- Photo of top of post
This “is a thick-walled, strangely shaped bottle with a small base of a diameter that would allow it to fit into one of the rings; glass fragments similar to this bottle were found in several units across the site. Seven glass bottle stoppers, divided into four categories, were recovered, and may belong to cruet or decanter sets.” This piece of ordnance is one of five recovered in 2015, and it was originally located on the spark deck aft. It is the only one of its type discovered in the river, and it was manufactured in Rome, Ga. It was presented to the Confederacy by the “Ladies of Rome.” The left trunnion is marked August 1862.

James Noble, an Englishman, organized the company with his six sons in 1855. By January 1862, the firm was heavily engaged in the production of cannon and battery equipment. “The Noble Brothers experienced considerable success in the casting of bronze and iron field guns. Between April 1861 and October 1862, some 58 field pieces were delivered to the Confederacy. Of these, at least 15 were cast iron 6 pounders.”

A dispute with the Confederate government in late 1862 ended all ordnance contracts with the foundry.

The Corps report says: “The Noble Brothers’ plant was destroyed when Sherman’s troops entered Rome on May 18, 1864. The large smokestacks of the foundry were blown up and the shops burned. The Union troops attempted to dismantle the lathe using sledgehammers, with little success. The hammer marks are still visible today and the fire caused minimum damage to the lathe. The massive machine stayed in production until the mid-1960s.”

From the final archaeological report prepared for the Army Corps:

“It is not known what kind of engine the CSS Georgia employed, but it is known that the LGA Steering Committee searched for one far and wide. In a letter written on June 11, 1862, John Elliot states that the vessel had a double engine and twin propellers. The engines were only able to make about 2 knots under full steam. All agreed they were inadequate for propelling the vessel against the swift currents or tides of the Savannah River. The engines did, however, serve a functional purpose, as one writer in 1862 stated, ‘Our iron floating battery is a splendid failure. She has been taken down between the forts and they are obliged to keep her engines at work the whole time to prevent her sinking, she leaks so badly’ It is thought that the vessel’s leaking was most likely a result of building her with unseasoned wood, a common practice in Confederate vessel construction.”

The triple-bladed propeller is mounted on a 6-inch diameter shaft approximately 12 feet 6 inches in length. Because two of its three blades were buried, jetting was conducted to uncover the blades prior to lifting. Once lifted onto the barge deck, the shaft was cut free from the 8-foot blade with a saw for ease of transportation and conservation. A single strut indicates the vessel would have had two propellers, and historical sources indicate that the CSS Georgia was powered by “a double engine and twin propellers,” according to the Corps report.

Some 68 boot or shoe fragments were recovered from the site. Most are small fragmentary pieces of leather with no complete shoe or boot, the soles of several examples being the most intact portion of recovered footwear. 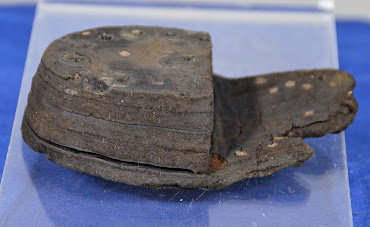 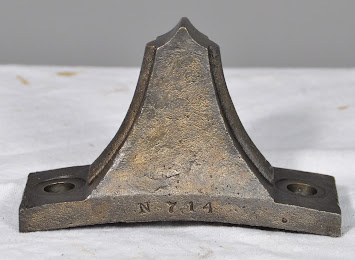 A naval gun had to be raised to an appropriate degree of elevation to achieve the necessary range to strike a distant object at sea. This sight was placed on the front of the barrel.

The use of this particular anchor is unknown.

Eight kaolin smoking pipes were recovered in the wreckage of the CSS Georgia. Similar to the prehistoric ceramics, and some percentage of the glass and historic ceramics recovered from the site, “the kaolin smoking pipe bowls are potentially intrusive (non-Civil War), although some if not all could easily have been personal property of those on board.”

The CSS Georgia could have easily carried 100 tons of coal, but it’s unknown how much it carried at the time of its scuttling. Bunkers would likely have been located outboard of the boiler on both sides of the hull.
-----------------
The Picket recently visited the museum, which put smaller artifacts in a large glass case. Signage and interpretation are still in the works.
Posted by Phil Gast at 12:55 PM