Stephen B. Oates, an award-winning Civil War historian who wrote biographies of Abraham Lincoln, Martin Luther King Jr., Clara Barton, William Faulkner and others, has died. He was 85. He died last week at his Amherst home after a battle with cancer, officials at the University of Massachusetts Amherst, where he was a professor from 1968 until 1997, said in a statement.

Oates received the Robert F. Kennedy Center for Justice and Human Rights book award in 1983. In 1993, the Civil War Round Table of Chicago awarded him the Nevins Freeman Award for Civil War scholarship and biography, the Associated Press reports.

He was also a key consultant on filmmaker Ken Burns' 1990 documentary series “The Civil War." “Stephen was an extremely valuable advisor to our Civil War series and an informed and passionate participant,” Burns said in a statement released by UMass. “He knew the bottom-up story as well as the top-down one, but more importantly, he knew and appreciated the huge stakes for the United States and indeed the world in a Union victory.” -- Article

2-day symposium focuses on hellish conditions in Missouri during war

Four nationally recognized speakers on topics ranging from guerrilla warfare and slavery to events in Missouri during the Civil War are featured in a symposium on Friday, Aug. 27, and Saturday, Aug. 28, in Springfield. The in-person and online event is hosted by Wilson’s Creek National Battlefield Foundation. -- Details

Tablets honoring Civil War soldiers -- including 21 African-Americans -- are back on display in Amherst, Mass., after nearly 25 years in storage

After a 25-year absence, marble tablets containing the names of more than 300 Union soldiers and sailors – including members of the famed 54th Massachusetts -- are on display in Amherst, Mass., fulfilling the dream of descendants of five African-Americans who are among those listed.

E.M. Stanton Post 147 of the Grand Army of the Republic, a national Civil War veterans group, donated the tablets to the town in 1893. They were unusual for the time by mentioning 21 Black soldiers, seven of whom fought with the 54th Massachusetts and 14 in the 5th Massachusetts Volunteer Cavalry (Colored). Five died during the war.

Among the names on the tablets are the Thompson siblings: Christopher, Henry and John served with the 5th Massachusetts Colored Cavalry while James joined the 54th. Christopher’s son, Charles, also was part of the 5th Cavalry. 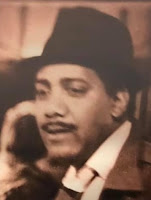 Dudley J. Bridges Sr. (right), a veteran of World War II, worked for years to have the tablets -- which were put in storage in the mid-1990s -- restored and put on display.
He died in 2004, but townspeople, officials and Bridges' daughter Debora Bridges and granddaughter Anika Lopes, who are descendants of Christopher Thompson, continued the effort to have the heavy, but fragile monuments refurbished and reinstalled in a suitable setting. (Dudley Bridges Sr.’s wife, Doris, was a direct descendant of Christopher Thompson).

Juneteenth -- the day in 1865 when blacks in Galveston, Texas, learned they were no longer slaves – became a federal holiday this year, bringing the dream to fruition: The tablets are now featured in a room at Bangs Community Center that includes photographs and history of the service of African-American troops during the war.

“It’s absolutely amazing to finally get them out” of storage, Debora Bridges told the Picket last week. “My dad was adamant about getting them displayed.”

Lopes said her grandfather wanted all the troops and sailors – white and Black – remembered. “The focus was on the 54th and 5th for part of that, as well as unifying the town. Because they were all Union soldiers,” she said.

The 54th Massachusetts, of course, is most known for its valiant attack on Battery Wagner near Charleston, S.C., in July 1863, a scene depicted in the movie “Glory.”

“This was one of the first major actions in which African American soldiers fought for the Union in the American Civil War. The courage of the soldiers in the 54th convinced many politicians and Army officers of their value, prompting the further enlistment of black soldiers,” according to the National Park Service.

The 5th Massachusetts Cavalry fought in Virginia, including around Richmond and Petersburg, and guarded prisoners in Maryland. It was sent to Clarksville, Texas, east of Dallas, at war’s end. 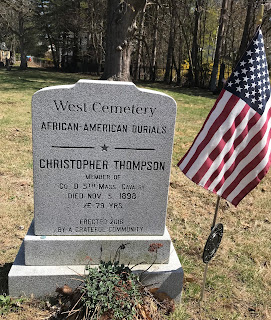 According to family history, Christopher T. Thompson volunteered with his three brothers. He was a 44-year-old farmer when he enlisted in January 1864. (Photo at left courtesy of Anika Lopes)

John died from an accident while in training and James mustered out in August 1865.

Christopher and his son, Charles, and Henry were with the 5th Cavalry in Texas in June 1865 when news was brought of the liberation of enslaved persons. Henry died of typhoid in October 1865 while guarding Confederate prisoners in Brazos Santiago near the border with Mexico.

Several of the Thompson brothers and Charles are buried at the town’s West Cemetery.

The tablets were displayed in Town Hall until the building was renovated in the mid-1990s. They were placed in storage in 1997 and had been away from the public’s eye since. Four list veterans and a fifth tablet lists those who died during the conflict.

Dudley Bridges Sr. developed a plan to move the tablets from a storage area at a nearby gravel pit to an intersection above Amherst College, not far from Town Hall. The plan was approved in 2001 and the tablets were restored by a Connecticut firm in 2010. The next steps in getting the tablets in the public stalled for a while.

Christine Brestrup, the town’s planning director, told the Picket that the Amherst Historical Commission was instrumental in having the plaques restored and eventually put on display.

She said the tablets, once donated by the GAR, were housed for decades in a stairwell area and the basement of Town Hall before it was renovated. They were then moved to the gravel pit.

“It is not a very charming location but it is weatherproof. It kept them dry and they were in wooden crates. They were very well-protected” after restoration, Brestrup told the Picket.

The town thought about placing them back in Town Hall but wasn’t keen about major structural work to handle their size and weight. And it eventually ruled out an exterior location. “We don’t want them to be subject to being weather-beaten. Marble is very susceptible to acid rain, freezing and thawing and cracks,” she said.

Planner Ben Breger said: “In a way, we have been lucky that they have always been kept inside. The marble is in some of the best condition of any tablets in Massachusetts.”

Lopes and a committee formed last year made a renewed effort to have them displayed and publicized their cause, bringing synergy  to the campaign.

Their work was very influential in getting the tablets back on display, officials said, and the endeavor benefited from a fortuitous situation. Brestrup said the Covid-19 pandemic put a halt to most activities at the Bangs center, leaving space available for the tablets.

Brestrup said there has always been an intention to get them back in the public eye. “Things in Amherst take a long time, but we eventually get things done.”

After the decision was made to move them to the community center, the town marked Juneteenth this year with several events, including commemoration of the tablets, which weigh between 600 and 800 pounds each.

Amherst is a progressive college town and is cognizant of the contributions of black businessman and residents over the years. A private website details related historical sites in and around town.

Another website, Amherst Historical, says this of wartime life:

“In spite of the major impact of the war, life in Amherst continued. Students remained at Amherst College, committed to their education along with their newly required military drills. Emily Dickinson composed poetry prolifically during the war years and continued to correspond with family and friends. At the Bee Hive, black residents of Amherst continued to enjoy fewer privileges than their white neighbors. However, some black citizens contributed to the war a few joined the prestigious 54th Regiment and others took advantage of the still limited educational opportunity to study at Amherst Academy in the evenings.”

Many Civil War dead from the region are buried at West Cemetery.

“These tablets speak volumes and there are so many people in the community who have reached out,” said Lopes.

Debora Bridges serves as guide and curator for the new exhibit. She said these soldiers fought for the freedom of African-Americans, and those with black units were at risk of retribution if captured.

Now it’s time to educate visitors about the sacrifices of all 300 men and their families.

The search continues for a permanent home for the restored and cleaned tablets. Town officials say Jones Library, which may be renovated, might be the right home for them.

“It’s been a long, sleepy journey but I feel we have a lot of positive energy and intention to move this forward,” said Lopes.

The project has been a labor of love for her, given her grandfather’s commitment to the tablets.

“When I touched them, they really came to life,” she said.