LeRoy Wiley Gresham's short, painful life in Macon, Ga., ended about the same time as the Civil War, but he left behind a legacy treasured by historians. Starting in 1860 at the age of 12, a few months before Georgia seceded from the Union, he started keeping a diary and did it almost daily until his death on June 18, 1865, two months after Gen. Robert E. Lee surrendered at Appomattox, Virginia. Now, for the first time, the diary has been put in book form, called "The War Outside My Window." It will be available on Amazon beginning Friday. • Macon Telegraph article | • Emerging Civil War review
Posted by Phil Gast at 8:56 AM No comments:


While last month’s excavation in the back yard of a Chicago residence yielded a few interesting artifacts – including an 1854 half dime, clay pipe fragments and buttons – what most excited the lead archaeologist was a stain in exposed soil.

Michael Gregory said the 29-inch square stain could be a footing that supported a pier or post that held up part of a barracks used to house Confederate prisoners at Camp Douglas during the Civil War. The camp also served as a training center for Federal troops headed for the front.

Gregory cautions that he is not certain about the discovery. That’s why he wants his team of volunteers to return this fall to the Bronzeville residence.

“If we expose a second one, I am going to be pretty well convinced we have found the structural features for the barracks.” He estimates about 66 such buildings were erected.

The Camp Douglas Restoration Foundation is trying to find precise locations of camp features in an urban area that has seen extensive development in the past century, and where much of history is covered by miles of pavement and buildings.

The crew was down about two and a half feet when it found the square, surrounded by circles that may be evidence of fish beds.

“When you get down and look at it closely … you can see where the lighter sand has washed back into the edges,” said Gregory.

“I had hoped it would be 12 inches or more deep and yield courses of brick or limestone. As it turns out, the feature is only about three inches deep and did not produce a brick or limestone pad. Still, I think it is a good candidate for a footing.”

Gregory said plans indicate the footings may not have been placed as deep as one might expect.

“The shallowness of the footing may represent the military's belief that the barracks would not be needed for very long and as a result, no more effort than was absolutely necessary was expended on their construction. After all, they were for an enemy who was in active rebellion against the Union.”

The Camp Douglas foundation spoke with archaeologists on the site of another prison, Johnson’s Island, off Sandusky, Ohio, but were not able to glean a sufficient comparison, Gregory said.

Adding to the difficulty is the fact that no camp structures exist today. While it has some clues, the foundation is not precisely sure where the sites it has excavated over the past few years correspond with camp plans. Confirming a camp feature would help, Gregory said.

Even if the team finds two footings in a row, it may not know if it they are on the north side of a barracks building, or the south.

In late April, 20 volunteers excavated three units in the same back yard where the foundation dug in October 2017, when they exposed a Minie ball.

Photos from this dig show a specific layer for the Camp Douglas period. But, as Gregory noted, some related artifacts are a little out of place because of postwar construction that affected soil levels in the yard.

The half dime was found closer to the surface, and the same was true with a couple Prosser buttons. The buttons are glass-like, made of ceramic and date after 1840.


“The only real reason that coin is there because of Camp Douglas,” said Gregory.

Most of the artifacts, however, found this time date to postwar occupation of the site. “Unfortunately, we did not find any definitive military items, at least among the artifacts I saw.”

The homeowner has invited the foundation to come back in late September or early October to look for a second footing.

“If at that time, we expose a second feature similar in appearance to the one we excavated last month, I will be convinced we have located a barracks, which is exciting to think about, because we can then begin to relate the camp or parts of it to modern urban features, something we have yet to be able to do with any precision and certainty,” Gregory said.
Posted by Phil Gast at 12:52 PM No comments:

'It's important they're not forgotten'

Eleven Michigan Civil War veterans were finally given proper headstones after being buried in Traverse City’s Oakwood Cemetery without one for more than 100 years. On Saturday, a headstone dedication ceremony was held by The Sons of Union Veterans of the Civil War. • Article
Posted by Phil Gast at 4:59 PM No comments:


Saturday’s (May 12) archaeological dig at the site of a Confederate prison near Millen, Ga., will be an opportunity for visitors to help excavate and screen soil at the southwest corner of the stockade.

The “public day” at Magnolia Springs State Park will include a 2 by 2 meter unit that has not been excavated, said Ryan McNutt, who oversees Georgia Southern University’s Camp Lawton project.

McNutt said he’d like to get a better sense of the construction method for anchoring corners of the wooden stockade.

“Is it similar to Andersonville? A different method?” he told the Picket. “Are they reinforced via joints and carpentry or were brackets and nails used?” 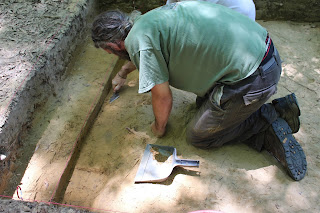 Camp Lawton operated for about six weeks in autumn 1864 before the guards took Federal soldiers to other prisons as the Union army approached Savannah. Many of the POWs were transferred to the site from Camp Sumter, also known as Andersonville.

Saturday’s event, set for 10 a.m. to 3:30 p.m., will include artifacts previously excavated and 3D printed replicas.

McNutt describes it as an “A” frame made of two angled posts, with potentially an eaves pole resting in the center, and a tarp, blanket or canvas thrown over it to make a lean-to.

The feature includes a subterranean pit dug not that different from a prisoner shebang (shelter) uncovered on the north side of the prison site.

Recovered artifacts include part of a frying pan, a cone cleaner for a percussion firearm, and various cut nails, brick fragments and some horse harness parts.

“These are all located in our search area close to the existing earthworks of Camp Lawton,” said McNutt.

Previous excavations on the prisoner side of the relatively undisturbed site have yielded hundreds of Civil War artifacts that help illustrate daily life. Officials have a good idea of where the stockade walls were erected, having found some post remains. The project’s work in the past couple years has concentrated on improving knowledge of the Confederate side of the prison, which falls within the state park boundary.

The 10,000 Federal prisoners were to the west and across a creek, on a hillside that later became a federal fish hatchery. That side of Camp Lawton is on property managed by the U.S. Fish and Wildlife Service.

“I think with successive field seasons, especially the coming 2019 one, we'll find more and more evidence of the Confederate occupation, and be able to generate a dataset of artifacts and structural information that we can compare to the already rich record for the POW occupation,” McNutt said.

McNutt, like Lance Greene, his predecessor wants to know more about what life was like for both guards and prisoners “in that extremely turbulent year of 1864.”

The event is free, but entrance into Magnolia Springs State Park is $5, or free with a Park Pass.
Posted by Phil Gast at 1:31 PM No comments:

For nearly two decades, Yolanda Romero has kept a promise she made to her dying father: to keep up a historic cemetery in Lawnside, N.J., that became the final resting place for black Civil War veterans, former slaves, and those who could not be buried in white-only cemeteries. Years of neglect have taken a toll on Mount Peace Cemetery. The ground around some graves is sinking, headstones are toppled and inscriptions on some markers are no longer legible. Volunteers have made progress, but lack the funds and manpower to restore dignity. • Article
Posted by Phil Gast at 7:30 AM No comments: