Civil War encampment, re-enactment is set for June in Michigan

History will come alive in Northern Michigan this summer. Wellington Farm, a 60-acre living history museum in Grayling, will open for the season on Friday, May 27.  The complex typically provides visitors the opportunity to experience farm life during the Great Depression, along with hosting events. One such event, a Civil War reenactment, is scheduled to take place June 3-5. During the weekend, an artillery battery, as well as infantry units, will be encamped throughout the farm. -- Article

Updated May 18:
The National Civil War Naval Museum has received a first shipment of artifacts belonging to the CSS Georgia, the ironclad vessel that was part of Savannah’s effective river defenses.

The U.S. Navy recently lent about 20 conserved items to the Columbus, Ga., museum, which has worked for years to receive items from the Confederate floating battery. The CSS Georgia was scuttled by its crew when Union forces took Savannah in December 1864.

“It was a really big feather in our cap to get such a collection as this,” museum director of history and collections Jeff Seymour told the Ledger-Enquirer newspaper.

The Civil War Picket has written extensively about the CSS Georgia and reached out to the Naval History and Heritage Command for comment and further details.

"NHHC hopes that through display of the CSS Georgia artifacts at NCWNM, the public will benefit from a greater understanding of archaeology, conservation, Civil War history and US Navy history," said Lt. Anthony Ivester, public affairs officer for the command.

Most of the ironclad’s wreckage was removed a few years back as part of the U.S. Army Corps of Engineers’ deepening of the Savannah River to make room for larger tankers. Thousands of artifacts have undergone treatment at Texas A&M University, which shipped them to the Navy Yard in Washington, D.C. for storage.

The project, which involved contractors and U.S. Navy divers, recovered more than 30,000 artifacts, including 241 pieces of ordnance, five cannons and two large casemate sections. The latter were documented and left in the water.

In 2017, Navy officials invited several museums, including from Savannah, to the recovery site. The Columbus museum is the first to receive the artifacts from NHHC, which is the custodian of naval artifacts and history.

"We have received previous inquiries from other institutions, but there are no other active agreements for CSS Georgia artifacts," said Ivester.

The Navy and the museum reached an agreement on the loan in March and the items were shipped on May 3, officials said. For now, the CSS Georgia artifacts will be displayed in the museum's main gallery, Wait said.

When asked about long-term plans for a display, Ivester said:

"NCWNM has agreed to coordinate with NHHC as they develop the exhibit for the CSS Georgia artifacts. Archaeological artifacts are best compatible with certain materials and NHHC can provide specialized guidance on which materials are suitable for their continued preservation while on display."

Wait said the shipment was the first of a few expected over the next three to five years.

“The Navy has a standard 3-year loan agreement to confirm that items are cared for properly.  However, all our conversations with them have included our long-term plans," she wrote in an email.

The NHHC described the present loan as short-term, with the possibility of renewal.

Wait said the CSS Georgia will be the seventh Civil War vessel to be exhibited in the country. The museum has two others: the ironclad CSS Jackson and the twin-screw wooden ship CSS Chattahoochee.

Gordon Watts, who has dived on the CSS Georgia and was involved in its recovery and study of artifacts, told the Picket: "I think it is fantastic that museum personnel have been able to obtain a collection of artifacts from the Georgia. Now at least some of the numerous artifacts recovered from the wreck will be available for public access. Congratulations to the National Civil War Naval Museum on a significant addition to their already impressive exhibits."

Remembering the versatile and passionate Ed Bearss: The public is invited to June celebration of life in Gettysburg

The public is invited to Gettysburg, Pa., for a celebration of life for renowned Civil War historian, battlefield guide and preservationist Edwin Cole Bearss, who died in September 2020 at age 97.

The American Battlefield Trust announced that the Bearss family has invited people to attend the 1 p.m. June 26 celebration – what would have been Bearss’ 99th birthday -- on land the trust preserved near the Seminary Ridge Museum and Education Center, a nonprofit venue on the campus of the United Lutheran Seminary.

Bearss was a legendary figure in the Civil War world. Tour participants hung on his every word as he walked the grounds and gave precise details of what happened there, usually without notes. His voice, itself riveting, was described as thunderous or booming. 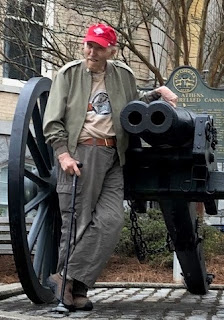 As "History's Pied Piper," he more than lived up to the title of Jack Waugh's 2003 biography of the decorated Marine Corps veteran and National Park Service chief historian emeritus.

The American Battlefield Trust detailed his career as a decorated Marine severely wounded during World War II, National Park Service historian, author, preservationist and lecturer. Commenters on the trust’s Facebook page this week remembered his tours and knowledge of battles to exacting detail.

Bearss gained fame for the discovery and raising of the USS Cairo in the 1960s, when he was historian at Vicksburg National Military Park. The majority of the public came to know him from his appearance in Ken Burns' 1990 “The Civil War” series on PBS.

The widower, after living 50 years in Arlington, Va., moved in 2018 to Mississippi, where he had family (Above, in Athens, Ga., in 2019. Photo courtesy of Georgia Battlefields Association.)

The American Battlefield Trust said the one-hour June 26 event will be tented, with seating available and water and light refreshments provided. Portable toilets and indoor restrooms will be nearby.

Click this link for an email address in which you can express your intention to attend. For those unable to attend in person, a video of the celebration will be posted later.

The headstone of a Union soldier buried beneath a Long Island, New York, church awaits a permanent location nearly four years after it was found during a renovation project.

The Picket wrote two articles about the unusual circumstances involving parishioner Pvt. John Codman Pollitz, who died in 1863 while serving with the 44th Massachusetts in North Carolina.

Trinity Episcopal Church in Roslyn has long known that Pollitz’s 1863 grave was incorporated within the current building during construction in 1906. But most of them had no idea where; there was no recorded location. That changed in summer 2018, when rotting wooden floor joists were removed and Pollitz’ headstone was exposed; it was lying flat in a crawlspace area.

“My assumption was that the headstone was too high standing up for the crawlspace. I believe they simply laid it down on that same spot” during the 1906 construction, church property manager and sexton Mike Callahan told the Picket.

A June 2019 ceremony rededicated the soldier’s grave, which still lies beneath the floor. A plaque marks the spot on the floor under which Pollitz rests. Members of an area camp of the Sons of Union Veterans of the Civil War took part in the ceremony.

At the time, the church said it was trying to determine what to do with the headstone.

“Plans are to build a cabinet mounted on the wall, but that’s going to take some engineering,” Father George Sherrill, priest in charge, told the Picket in a recent email. “The stone weighs a ton and affixing to the wall is going to be difficult, so no real timetable as of yet.”

The priest said the headstone does elicit conversation when people see if for the first time.

The headstone is currently propped up against a bell that has its own interesting history.

According to a June 1914 article in The New York Times, a dying Pollitz asked comrades to ensure his body was sent to Roslyn, where it was to lie in the shadow of the belfry. “With his army pay he had bought a bell as a gift to the parish, and its arrival and his death were so close together that it was tolled for the first time at his funeral,” the article said.

It’s believed that the young Pollitz was living in Boston and barely 18 when he joined up with the 44th Massachusetts, ostensibly in the summer of fall of 1862.

The regiment, which took part in skirmishes and sieges across North Carolina before it was mustered out in June 1863, was in New Bern for several months before transfer to Plymouth, N.C.

A history of the regiment detailed disease and illness that stalked the troops during campaigning and at their quarters. Pollitz, who served in Company F, died on Jan. 7, 1863 in New Bern.

According to the “Record of the Service of the Fourth-Fourth Massachusetts Volunteer Militia in North Carolina, August 1862 to May 1863,” Pollitz and 13 other soldiers in the regiment died from cerebrospinal meningities.

His remains were sent north to Long Island. “Shortly after his burial, February 1, 1863, the bell was taken down and another put in its place. John Pollitz’s bell was inverted, filled with dirt and flowers, and stood by his grave for many years,” a church newsletter states.

In 1914, the bell was moved and restored after church officials discovered the grave under that floor while investigating a break in the foundation walls, according to The Times.

36 Civil War soldiers will have headstones dedicated in Iowa cemetery

A dedication ceremony in Council Bluffs, Iowa, for military headstones for 36 Civil War veterans who have been buried in unmarked graves for a century will be taking place in May. This is being done with the help of Colonel William H. Kinsman Camp #23, Sons of Union Veterans of the Civil War, and the Veterans Administration. -- Article