He kept a compelling diary during the Civil War. Now the final resting place of LeRoy Wiley Gresham, who died at just 17, gets a little TLC


Efforts to restore and clean graves at Rose Hill Cemetery – which holds the remains of slaves, three members of the Allman Brothers Band and thousands of Macon, Ga., residents – recently focused on the family plot of LeRoy Wiley Gresham, the teen boy who penned a diary that vividly captured life on the home front during the Civil War.

A small group of enthusiasts recently gave a public demonstration on proper headstone cleaning techniques at the plot, where LeRoy, his parents, two siblings and other relatives are buried.  LeRoy died  in June 1865 at just age 17.

Gresham’s diary first came to light in a 2012 Washington Post article that detailed the invalid youth’s take on the fortunes of the Confederacy. “It is a chronicle -- in neat, legible handwriting -- of the excitement of the war’s early months, the seeming endlessness of the conflict and the approach of the dreaded Yankees as they steamroll through Georgia,” the article stated.


The diarist’s story gained new fame in 2018 with the publication of “The War Outside My Window: The Civil War Diary of LeRoy Wiley Gresham, 1860-1865.”

Jan Croon drew on digitized copies of the diary in the collection of the Library of Congress. She spent a year conducting genealogical and property research while transcribing the diary.

LeRoy, son of John Jones Gresham and Mary Gresham, came from a prominent family. His father was an attorney, textile company founder and slave owner and served two terms as the city's mayor in the 1840s. The 1842 Inn, a Greek Revival structure that offers rooms and hosts special occasions, was built by John Gresham in 1842.

“Every time I go to Macon I have to go (to Rose Hill) and see the Greshams,” Croon told the Picket. “I have developed a huge emotional attachment to this family.” 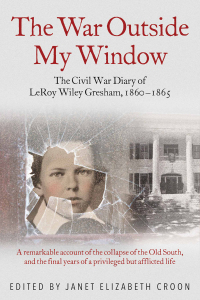 Part of the day focused on the beginning of repairs to the broken headstone (likely from vandalism) of infant Edmund Gresham who died of pneumonia in 1846 before LeRoy was born.

Most of the other graves are in decent shape, though LeRoy’s headstone needs to be straightened.

“They needed some care. The stones had a few chips, LeRoy’s stone had a wasp’s nest growing in part of it, and dirt and things accumulate over time,” said Croon, who did not attend the event.

Among the volunteers at the public day was archaeologist Dr. Mark Newell, who said about two dozen people and a mapping service that surveyed the plot attended.

Volunteers assisted with the cleaning of headstones.

“No unmarked burials were found at all,” said Newell, adding evidence of wooden coffins for the parents and LeRoy was recorded.

“The key thing about LeRoy’s diary is our first intimate look at the day-to-day lives of a wealthy plantation family.”


The boy detailed daily life, what the family ate, the weather and what he gleaned from newspapers. “You don’t get that from the ground or archival records,” said Newell. “This is America’s Downton Abbey, when you look at the family and its wealth, and the impact of the Civil War.”

Croon has spoken to numerous groups since her book came out. She is working on a school curriculum guide and edited a young adult version of the diary.

“I knew I had something different. As the project grew, it had many more layers to it than we originally thought. It became more significant as it went. It was the only diary written by a young man who did not fight in the war who describes it in such detail. He writes almost every day. You get a sense of a community in the South that goes through a lot of change.” 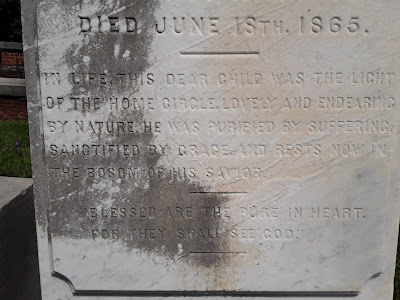 There’s been a longtime mystery regarding LeRoy’s illness. He was crippled in 1856 when a chimney collapsed and crushed his left leg. He developed other medical problems and died shortly after war’s end, from the effects of spinal tuberculosis, Croon said.

The 2012 Post article detailed some of the boy’s thoughts during the conflict. Near the end of 1862, LeRoy wrote:

“I close this record with the earnest hope that ere another Christmas is gone we may have peace and prosperity, and . . . the crisis of my disease may have passed and I may at least be released from constant confinement to a horizontal position.”

Fears that Union Maj. William Sherman might take Macon (he did not) brought this July 1864 entry:

“I went upon the top of the house but could only see the smoke. Every man in town is under arms. . . . We sit anxiously waiting for news, too excited to read or do anything but think of Father . . . and listen to the booming of the cannon. . . . A thousand wild rumors are afloat.”


Sadly, the boy did not grow to adulthood. Worn down by illness, he succumbed less than two months after Lee's surrender at Appomattox.

While the work day brought an opportunity to spotlight the lives and deaths of the Greshams, there are many more graves at Rose Hill needing attention.


“I hope there is more awareness of not only the Greshams but the history located in all cemeteries,” said Croon.
Posted by Phil Gast at 5:32 AM 2 comments:

Kansas gravestones linked to Quantrill raid to be relocated

A Civil War-era gravestone linked to the infamous Quantrill’s Raid has been discovered in a Kansas forest. FOX4 News reports that Chad Gustin and his two elementary-school-aged children discovered two large headstones on land they own overlooking the Kansas River in Lecompton, Douglas County. Historians believe that one of the two gravestones belongs to a man killed in Quantrill’s Raid, a bloody attack on the nearby town of Lawrence during the Civil War. • Article