A reopened trail and a new observation deck will provide visitors at Fort Pulaski National Monument near Savannah, Ga., a front-row view of preservation work on a beloved lighthouse that survived the intense shelling of the neighboring fortification during the Civil War.

The national park’s preservation team earlier this month began deferred work on the exterior and interior of the Cockspur Island Lighthouse, which is in serious need of some TLC, officials said. 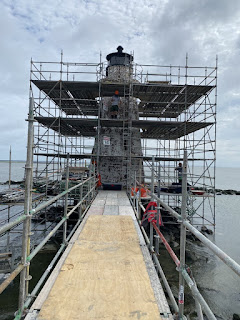 Most of the estimated $150,000 project will focus on the masonry and making sure that the mortar is stable. The team will be removing failing mortar and replacing mortar with a more compatible mix. Work is expected to conclude in October.

“These efforts will help stabilize the structure and mitigate damaged caused by rising damp, moisture infiltration, tidal conditions and past incompatible mortar and paint applications,” Emily Forlenza, exhibits and acting facility operations specialist at the park, told the Picket in an email.

Fort Pulaski also is replacing the 46-foot lighthouse’s door and windows. “These have been fabricated to match historic configuration and materials, while enhancing security to the site from wildlife and visitors,” Forlenza said.

The structure has endured high tides, hurricanes, waves from ever-growing container ships, careless individuals and – for a deafening 30 hours – the April 1862 bombardment of Fort Pulaski.

The Cockspur light’s masonry base was built in the shape of a ship’s prow to deflect the forces that have worn away at her, consuming much of the small island that serves as its foundation. And while her light was extinguished more than a century ago, the beloved beacon exudes charm for boaters and those making the trek on U.S. 80 from Savannah to Tybee Island.

Motorists and those venturing on the 45-minute round-trip walk to the observation deck will notice scaffolding all around the lighthouse.

Forlenza emphasized that the lighthouse remains closed, even when workers are present.

“There is no current plan for the park to open the site up for visitation once work is completed; these repairs are being done to stabilize the structure and for interpretive purposes at a distance,” she said. The park ended public access to the site several years ago, citing the precarious ecological situation and increased vandalism (people can walk to the lighthouse during low tide).

The South Channel of the Savannah River was the prime gateway to Savannah in its early years. One brick tower, used as a landmark, was built on Cockspur Island between 1837 and 1839. A major upgrade came about a decade later when an illuminated station was built. That tower has a focal plane 25 feet above sea level, according to the NPS.

A hurricane leveled the lighthouse in 1854 and a new tower was rebuilt a couple years later. The dawn of the Civil War brought a temporary extinguishment of its light.

Then the war itself came to Cockspur Island, home to Fort Pulaski.

The Union’s strategy was to put a chokehold on Southern commerce by controlling ports and coastal areas, including this area next to the Atlantic Ocean. Federal soldiers landed at Tybee Island and set about preparing for an attack on Fort Pulaski, a brick guardian to the west.

“The Federal batteries were 1,500 to 4,000 yards away from the fort,” said Charlie Crawford, who as president of the Georgia Battlefields Association led tours of Civil War sites in the Savannah area. “Part of Battery Halleck is still discernible on the south side of the road. Had the Federals chosen to aim at the lighthouse, the closest batteries would have been about 700 yards from it.”

The Confederate garrison at Pulaski would learn first-hand about advances in technology.

“When Fort Pulaski was built (1830s, with Robert E. Lee as one of the principal engineers), the rifled gun was not around, so thick masonry walls were the best type of fortification, and the distance to Tybee Island would prevent any 1830s-era gun from getting close enough to do significant damage,” Crawford previously told the Picket. “By 1862, the James Rifles blasted apart the walls relatively quickly.”

“When the breach on the southeast bastion allowed the Federals to shoot across the parade ground and start bouncing shells off the temporary wood wall in front of the powder magazine, Olmsted knew that a potentially catastrophic explosion was likely,” said Crawford. He surrendered on April 11.

Remarkably, the lighthouse suffered little or no damage during the Federal attack. Crews manning 36 guns on 11 batteries stretching along the western end of Tybee Island likely used the lighthouse for sighting as they pounded away at the Confederate fort located about 1 mile beyond. 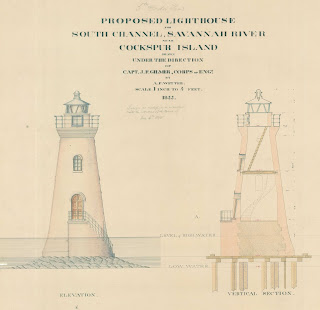 “Not much point to aiming at the lighthouse,” Crawford told the Picket in 2015. “If the Federals could capture the port, the lighthouse would be useful.”

Pulaski remained in Federal hands and the city fell in December 1864 in the closing months of the conflict. About a year after the war’s end, on April 25, 1866, the beacon was relit and painted white for continued use as a navigational aid. (At right, 1850s schematic for the current lighthouse, courtesy of NPS)

A storm in 1881 destroyed the keeper’s residence and the surge filled the lighthouse interior with seawater. The plucky tower remained in duty for another three decades, but the writing was on its walls.

Nature’s assault on the lighthouse has continued, with officials fighting back against the effects of erosion and shipworms on wooden support timbers. 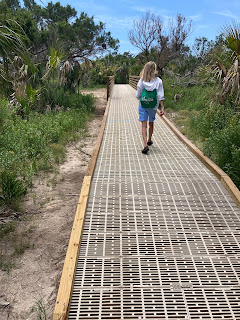 This isn’t the first preservation work on the lighthouse. It is a constant process, when funding is available. Hurricanes have damaged Fort Pulaski's grounds. The revamped trail (left, Picket photo) has been improved.

Forlenza said funding for the fabrication of the door and windows came from a grant given to the Friends of Cockspur Island Lighthouse by the Tybee Island Historical Society, which was matched by NPS Centennial Challenge funding. The Picket reached out to the friends group for comment on the project but did not receive a reply.

The lighthouse has a white exterior and that look persisted for decades. But much of that paint is gone or weathered now. The park does not plan to repaint the exterior, officials said.

“There will be no additional coating applied to the lighthouse, and the coating that is there will not be removed by any mechanical means,” said Forlenza. “Our cultural resource team decided that it was best to not risk further damage by removing the existing coating, and the brick is vulnerable enough in the extreme tidal conditions. Natural weathering of the exterior coating was decided to be the most appropriate treatment.”

Going to Gettysburg this summer? Park rangers are back on the battlefield, leading walks, tours and anniversary programs

After a nearly two-year hiatus, Gettysburg National Military Park will host ranger-led activities this summer, including hikes and programs focusing on the 158th anniversary of the July 1-3, 1863, battle.

The park, like others in the National Park Service, largely turned to virtual programming during the coronavirus pandemic.

“Hike the fields of Pickett’s Charge, explore the rocky summit of Little Round Top, reflect on the words of the Gettysburg Address, and much more,” the park said in a press release Wednesday. “There are a host of new and exciting offerings that will appeal to first time and repeat visitors alike.”

The park released its summer schedule, including these for the balance of June: A 90-minute hike that provides an overview of the battle; a tour of Soldiers’ National Cemetery, where President Abraham Lincoln delivered the Gettysburg Address; the fight for Little Round Top; care of the wounded; and an African-American history hike.

“Visitors are invited to follow in the footsteps of the Confederate soldiers that took part in Pickett’s Charge, the climactic moment of the Battle of Gettysburg. Who were the men that made this assault, what motivated them, and what did they experience in the fields between Seminary and Cemetery Ridge? Join Ranger Matt Atkinson and retrace the route of the most famous charge in American military history.”

Park Superintendent Steven Sims said in the press release that the summer season will bring back in-person programs that “share the inspiring, tragic, and relevant stories of the battle and its aftermath. Our professional Park Rangers make the past come to life on this hallowed ground.”

Chickamauga historian Jim Ogden is a font of knowledge on battles

Do you know the reason why Chattanooga and Chickamauga became the sites of the first national military park, or that it contains more monuments than Gettysburg? Chickamauga and Chattanooga National Military Park staff historian Jim Ogden does, and he shared these and other ear-catching facts that are part of his style with the Chattanooga Civitan Club on Friday. -- Article