Edwin Cole Bearss, who died Tuesday at age 97, was a legendary figure in the Civil War world. Tour participants hung on his every word as he walked the grounds and gave precise details of what happened there, usually without notes. His voice, itself riveting, was described as thunderous or booming.

The historian incredibly led tours until late last year, when it became evident his health would not permit him to continue. Charlie Crawford, president of the Georgia Battlefields Association, told the Picket then that no other expert could emulate Bearss.

The American Battlefield Trust this week detailed his career as a decorated Marine severely wounded during World War II, National Park Service historian, author, preservationist and lecturer. Among his accomplishments with the NPS was the discovery and raising of the USS Cairo in the 1960s, when Bearss was historian at Vicksburg National Military Park.

The Picket asked Crawford for a memory relating to Bearss. Here is his response:


"As you know, stories about Ed are legion. Jack Waugh's 2003 biography of Ed is titled "History's Pied Piper," and we witnessed this effect many times in the years that Ed led Georgia Battlefields Association tours and when we would attend American Battlefield Trust events where Ed led tours.

In the last few years, Ed asked that we request a wheelchair and meet him at the airport arrival gate when he came to Atlanta to lead one of our tours. Ed realized he was having trouble navigating the crowded airport corridors, even though he didn't use a wheelchair when he was on a battlefield.

Bill (-----) usually had the task -- more of an honor than a task -- of meeting Ed, and Ed would often engage the wheelchair attendant in conversation while transiting from the gate to baggage claim. Ed's knowledge would amuse and amaze the attendant, and Bill would notice that other travelers would adjust their pace so that they could hear what Ed was saying.

Of course, they didn't have to be too close to Ed because he had a "trumpet voice," to use his own characterization. So the crowd around Ed would grow as he transited. Some people would approach Bill at baggage claim and ask the identity of the man in the wheelchair and how it was that he knew so much.

Occasionally, someone would recognize Ed and ask if he remembered a tour they were on years ago. Of course, he always did and usually responded with an anecdote about that specific tour. He truly was a pied piper."

Bearss, after living 50 years in Arlington, Va., had recently moved to Mississippi, where he has family, according to the trust and the funeral home in Pearl handling his arrangements.

'Doc' Holliday's father and adopted brother served during the Civil War. Here's the Georgia city where the gunfighter's legend began. 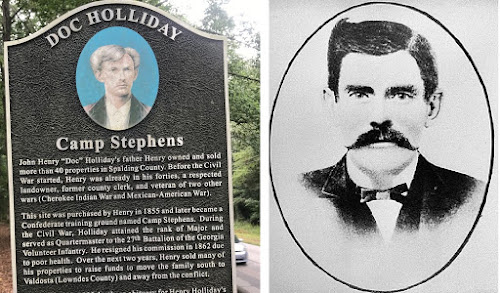 Did John Henry “Doc” Holliday kill nearly a dozen men, or perhaps only a few? Was Holliday’s tuberculosis contracted from his mother? Was he involved in a deadly incident at a Georgia swimming spot that foreshadowed a penchant for violence?


These questions and many more swirl around the dentist, gambler and gunman who became the stuff of legends (and dime novels and movies) relating to the Old West. One thing we know for sure: Holliday’s story begins in Griffin, Ga., where he was born in August 1851 and lived for more than two years during the Civil War.

I came upon Holliday by surprise last month when I was in Griffin to visit the site of Camp Stephens, a training center for Georgia troops during the conflict. Griffin is about 40 miles south of Atlanta.

There, along a road on the edge of surviving entrenchments, is a marker topped by a photograph of the young Holliday. It describes how his father, Confederate Maj. Henry Burroughs Holliday, once owned the land on which the camp was built.

The elder Holliday briefly served as quartermaster for the 27th Georgia Infantry during the war before he resigned due to poor health.

While I have long known that “Doc” Holliday lived in Valdosta, Ga., for a few years, I was unaware he was from Griffin, where he has been remembered in a barbecue festival, a downtown bar bearing his name, a now-closed museum and “Doc Walk,” seven markers that detail aspects of his life in the town.

A local brochure aptly subtitled “Where the Legend Begins” offers a walking/driving tour for those interested in learning about Holliday’s boyhood roots.

There are so many stories about Holliday that end with, “We don’t know for sure.” An example: Some believe he is buried in Griffin, while most historians list his resting place as Glenwood Springs, Colo., where he died at age 36.

“He is mostly myth and legend. He is mostly smoke and mirrors,” says Cindy Barton, founding archivist at the Griffin-Spalding Archives and a Holliday researcher.

“Doc” Holliday grew up in comfort in Griffin. His father was a successful businessman and public servant who owned several properties on Tinsley Street, where the boy was born to Henry and Alice Jane McKey Holliday. He was baptized at the town’s Presbyterian church.

“One recollection I read said he was just an average person, he wasn’t anything that would cause attention,” says Barton. Some claim that Holliday learned to play cards and use a gun when he was growing up and visiting his uncle’s home near Atlanta.

A sister, Martha, died at just 6 months old before Holliday was born.

“This, however, didn’t mean the Holliday house was empty of family -- Henry Holliday had come to his marriage with one son already, a Mexican orphan boy he had found during his service in the war with Mexico and had taken home as a foster child,” wrote Holliday expert and author Victoria Wilcox in True West magazine. “Francisco Hidalgo (aka E’Dalgo) was near 15 years old when John Henry was born, but still living in Henry’s home, a kind of adopted older brother to Henry’s new son.”

When the Civil War broke out, Henry Holliday joined the 27th Georgia, serving at Manassas and Richmond, Va., while Hidalgo enlisted in the 30th Georgia Volunteer Infantry. (Like "Doc," Hidalgo died from tuberculosis, in 1873.)

Henry Holliday left the Confederate army in mid-1862, suffering from “watery dysentery,” according to Wilcox, and moved his family to Bemis, a community just north of Valdosta, in 1864. Alice Holliday died of tuberculosis two years later, and Henry remarried shortly thereafter, moving to Valdosta, where “Doc” attended Valdosta Institute.

“Holliday’s years in Georgia are shrouded in mystery,” states an article in the New Georgia Encyclopedia. “Family folklore involves Holliday in a shooting incident on the Withlacoochee River, northwest of Valdosta, in which he may have shot and killed one or more African Americans. Although no contemporary record of the event exists, the story fits the violent nature of his later years out West.”

No one knows for sure what happened. Some accounts said Holliday and a relative fired over the heads of those who were swimming.
At 19, Holliday attended the Pennsylvania College of Dental Surgery, graduated in 1872 and briefly practiced at the Atlanta office of Dr. Arthur C. Ford. Barton says Holliday was known to be a talented dentist during his brief career.

Holliday returned to briefly to Griffin, and it’s possible he practiced there for a short time. The dentist sold property he inherited from his mother and moved to Dallas in 1873, where he practiced with Dr. John Seegar.

“He quickly made a name for himself as a card player, and often quarreled with other gamblers,” according to the New Georgia Encyclopedia. “In 1875, Holliday was arrested for trading gunfire with a saloon owner. Although the charges were eventually dropped, this incident along with several gaming charges, caused him to leave Dallas.”

The rest, as they say, is history.

Holliday lived in several towns across the West, was involved in many violent encounters, and befriended Wyatt Earp. His most famous moment was the 1881 “Gunfight at the OK Corral” in Tombstone, Az. How many men did Holliday kill in all? No one knows for sure.

Barton says gambler and writer W.R. “Bat” Masterson helped create the Holliday legend. In 1907, Masterson wrote of the wayward dentist: “Holliday had a mean disposition and an ungovernable temper, and under the influence of liquor was a most dangerous man.”

“Holliday seemed to be absolutely unable to keep out of trouble for any great length of time,” Masterson continued. “He would no sooner be out of one scrape before he was in another, and the strange part of it is he was more often in the right than in the wrong, which has rarely ever been the case with a man who is continually getting himself into trouble.”

Holliday’s exploits ended in November 1887, when he died of tuberculosis. His father, Henry, died in Valdosta in 1893.

Barton, who researched and wrote text for the “Doc Walk” markers, finds Holliday’s family history as interesting as his Old West legacy. But there’s no disputing where his fame lies.

“He grew up in a turbulent time and he became a man made famous by circumstance,” she says.
Posted by Phil Gast at 9:45 AM No comments:

He wants to reunite photo of Indiana soldier with descendants

A California resident is trying to find a new home for a photo with southern Indiana connections. Dan Fahey, who lives in Berkeley, is the owner of an image of William P. Davis, who served in the Union army during the Civil War. After conducting some research, Fahey discovered that the soldier was born in New Albany in 1834, and he served as an officer in the 23rd Indiana Volunteer Infantry Regiment. · Article