Haven't seen one quite from this angle before. A Michigan newsman, dressed as a Confederate, placed a camera on his forehead to film a re-enactment of the Battle of Sheperdstown in what is now West Virginia. • Photos and video
Posted by Phil Gast at 9:18 AM No comments:

Confederate shell is a family heirloom

A Pennsylvania family has kept a 10-pound artillery shell ever since it was dug up on their property in 1917. The round was fired by McGregor's Battery, part of Confederate Gen. J.E.B. Stuart's cavalry forces that clashed with Union cavalry on June 30, 1863, in and around Hanover. The Blettner's would like to see the shell put on display, perhaps with the Gettysburg electric map that was recently purchased by a businessman for a proposed Hanover Heritage and Conference Center. • Article
Posted by Phil Gast at 8:34 AM No comments:

Fresh insights into the Civil War

Civil War medicine, diplomacy and the Emancipation Proclamation will be discussed at an October 13 symposium entitled “1862: Following the Path to  Freedom” at Kennesaw State University in Georgia.

The 9 a.m. to noon event is sponsored by the school’s Civil War Center in partnership with Kennesaw Mountain National Battlefield Park. Speakers include:

--  Howard Jones, research professor at the University of Alabama, and author of numerous publications, will lecture on diplomacy efforts.

-- Craig L. Symonds, professor emeritus at the U.S.  Naval Academy where he taught naval history and Civil War history for 30 years, will discuss Abraham Lincoln's issuance of the Emancipation Proclamation and the president's efforts toward colonization.

The free symposium is at Kennesaw State University, 1000 Chastain Rd., Kennesaw, Ga 30144, Social Sciences Building, auditorium room 1021. Free parking will be available in the West Parking Deck, on Campus Loop Drive. More details on the center.
Posted by Phil Gast at 5:16 AM No comments: 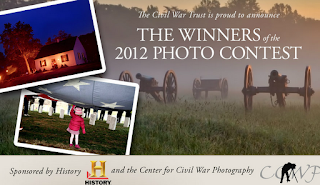 Buddy Secor from Stafford, Va., was the grand prize winner in the Civil War Trust's annual photography contest. "His beautiful photo of a misty dawn at Fairview on the Chancellorsville Battlefield took our breath away," the battlefield preservation group said. • See winning photos
Posted by Phil Gast at 8:57 AM No comments:

Director Steven Spielberg, whose "Lincoln" is scheduled for release the previous week, will speak Nov. 19 on the 149th anniversary of the Gettysburg Address.

Spielberg will take part in a Dedication Day ceremony at Soldiers' National Cemetery, sponsors of the event announced Tuesday.

“It is an honor to be asked to speak at such a hallowed place on the anniversary of Lincoln’s Gettysburg Address," the director said in a statement. "I look forward to visiting Pennsylvania and commemorating this important moment in our nation’s history.” The film stars Daniel Day-Lewis.