Walk on the beach in North Carolina yields exposed artillery round

Kerry and Patti Belanger's walk on the beach ended with a knock on the door from the bomb squad. The couple set out on a hunt for seashells on Kure Beach near Wilmington, N.C., and soon discovered a live Civil War-era munition. The bomb squad showed up, and the New Hanover County Sheriff's Office determined the mystery munition was a Union Army Parrott round from the Civil War. Bomb squad deputies removed and discharged the shell. The couple got the pieces back.  • Article

"It saved instant death": Bible struck by bullet during 1864 fighting is on display at Monocacy battlefield in Maryland


A Confederate-issued Bible is on display at Monocacy National Battlefield in Maryland, where visitors can learn about the bullet that passed through it and wounded a Virginia soldier.

Pvt. Thomas Cox, a member of the Red House Volunteers, Company A, 21st Virginia Infantry, was captured after on July 9, 1864, at the battlefield near Frederick, Md. He was fighting near the Thomas farm when he was wounded.

The 33-year-old farmer from Carroll County died on Aug. 15 at a Baltimore hospital.

Tracy Evans, curator and park ranger at Monocacy, said this is the first time the Bible has formally been on display. The exhibit was opened in May and the volume is expected to be out for a few more months.

The small Bible is closed, but visitors can see a photograph of it when opened and read some messages that were written on its pages.

“It’s not completely falling apart but to display it open could potentially cause it to,” said Evans. “If we turn it to a certain page the binding is fragile and you don’t want to tear loose the binding.” 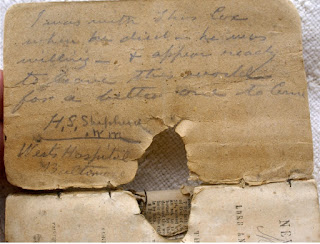 The Bible is remarkable in its own way. There’s a gaping hole in the center of the book left by the bullet. “We are thinking it must have gone in sideways,” Evans previously told the Picket, adding that is perhaps the reason Cox was not killed outright.

Cox asked a fellow prisoner at the squalid West Building’s Hospital in Baltimore to inscribe a message in his battered Bible.

“The ball that struck this book entered my left brest (sic) and came out of right – it saved instant death & will be the means of saving my soul. Thomas Cox,” reads the penciled writing on the margins of a few pages. On succeeding pages is written: “Blessed are the dead that die in the Lord.”

In 2015, the park purchased the New Testament for $12,500 from brokers Perry Adams Antiques in Petersburg, Va. Attempts to find a Cox descendant have been unsuccessful, Evans told the Picket.

The park said the Bible is among the few items in its collection to have known Confederate provenance.

Cox said a conservationist examined the Bible and said it was best to keep it as is.

“It is a unique item,” she said. “I think people are interested in it because it has entries in it.”
Posted by Phil Gast at 11:15 AM No comments:

Recovered Enfield rifle stocks are holding up well, but crate and protective metal lining are showing more signs of deterioration

A crate of 20 British-made Enfield rifles that never made it into the hands of Confederate soldiers has remained in water ever since it was pulled from the wreckage of the blockade runner CSS Stono in the late 1980s.

For the last six years, the weapons have been on display in a 300-gallon aquarium at Sweetwater Creek State Park west of Atlanta. Every six months or so, technicians with the Historic Preservation Division of the Georgia Department of Natural Resources clean the tank and check on the status of the artifacts.

“The rifles themselves are in great shape, as far as the wood goes. That’s kind of a mystery,” said Josh Headlee, a curator and historic preservation specialist.

The remnants of the wooden crate and metal lining have not fared so well.

While the rifle stocks are walnut, the crate is likely pine, a softer wood, said Headlee. And the metal lining, made of an alloy, appears to be waterlogged.

“The metal is taking on properties of cloth, becoming really soft,” he said. The rifles are bulging that metal outward.

Headlee and another specialist recently cleared the tank algae and loose reddish sediment. “I run my hand over (the rifles) and that removes the stubborn algae.”

Pending conservation of the artifacts, technicians have worked over the past several years to remove damaging salt (chloride).

“We are actually right at tap water,” said Headlee. “We feel most of the salts have already leached out.”

The CSS Stono, laden with precious arms, munitions and goods from Europe, in 1863 ran aground on a submerged sandbar off Fort Moultrie while trying to evade Federal ships.

“It looks like this crate had fallen off a stack and one end had busted completely out,” said Headlee. “A couple of the rifles were damaged. Because the crate was damaged all the sediment had washed in it and basically turned to concrete.”

After Georgia acquired the guns from South Carolina, technicians chipped off the encrusted material.


At least one of the weapons bears the mark, “T. Turner,” a reference to well-known English gunmaker Thomas Turner, who turned out quality weapons in the mid-19th century.

The iron rifle barrels, locks and bayonets in the crate are heavily deteriorated from saltwater corrosion. Brass components, including butt plates, trigger guards and the nose cap at the end of the barrels, better withstood the ravages of longtime submersion. Researchers also found a bullet mold, tools and tampions, or cork and brass plugs inserted into the muzzle to ward off moisture. Those items are not in the aquarium.

The metal lining sealed the cargo from salt air and ensured the rifles were not tampered with. Inside, the rifles were placed in an alternating butt to muzzle pattern. Wooden blocks were used to prevent the weapons from shifting.

The artifacts have been in a “holding pattern” until money is secured for conservation.

In the short term, Headlee may look at a fungicide as a way to cut down on algae.

“I would love something more done with them,” he says of the rifles, crate and lining.

Officials are looking into a possible heritage grant to do extensive conservation that will take the artifacts out of the water. For now, the items remain in a protective water environment.

But even that can’t prevent degradation.

“We are doing everything we can do to slow it down,” said Headlee. “I am noticing it is picking up.”
Posted by Phil Gast at 10:47 AM 1 comment:

A ceremony marking the 125th anniversary of a Civil War monument in Cleveland is set for Thursday. The Cuyahoga County Soldiers’ and Sailors’ Monument honoring the county’s citizens who fought and worked for the Union was dedicated July 4, 1894. The anniversary celebration is set for noon on Public Square. • Article
Posted by Phil Gast at 10:19 PM No comments: