Monument to be moved to near original spot

A nearly 140-year-old memorial to Union soldiers banished for decades to a hill in Wheeling, West Va., should be back downtown by early summer. More than 20 feet wide, it weighs well over 25 tons, so the new site, next to historic West Virginia Independence Hall, will have to be reinforced first so it can carry the extra weight. The move will bring the monument to a block away from its original site. • Article
Posted by Phil Gast at 8:06 AM No comments:

I met Joe Whitaker in the summer of 2009 when I first visited the headquarters of the Longstreet Society in Gainesville, Ga. I shuffled up the steps of a one-story wooden building -- all that remained of the Piedmont Hotel, which was operated for years by Confederate Gen. James Longstreet in his retirement.

Whitaker greeted me and proceeded to be an affable and helpful guide to the building. He was very knowledgeable about the general and his legacy.

Word that Whitaker, 85, died on Wednesday saddened me.

C.J. Clarke IV, president of the society, told members in an email that Whitaker “was the best and will never be forgotten.”

Whitaker was the former society treasurer and manager of the hotel. He greeted visitors and showed them the building’s rooms and items linked to Longstreet. He continued to serve on the board until his death.

“Joe was a loyal and enthusiastic supporter of General Longstreet and a thoroughly knowledgeable historian,” Clarke said.

Since we met, Whitaker occasionally sent emails about society events and the annual memorial service for Longstreet.

By then, I had published two articles about the controversial Longstreet and the society’s efforts to honor him and help reestablish his reputation.

Longstreet moved to Gainesville from New Orleans about six years after the end of the Civil War. The controversy about his conduct at the Battle of Gettysburg and his postwar support of the Republican Party, Reconstruction and suffrage for blacks dogged him to his grave at Gainesville's Alta Vista Cemetery and for years afterward.

But time – and many historians – have been kind to the general in recent decades, with many arguing he was a scapegoat for the Southern defeat and failures by Gen. Robert E. Lee.

In 2009, Whitaker said the general’s reputation has been “partially salvaged” in recent years.

Whitaker believed Longstreet was a bit naïve about how his post-war politics would play with fellow Southerners. "He did not understand. He thought everyone was pragmatic, having the common sense he had." 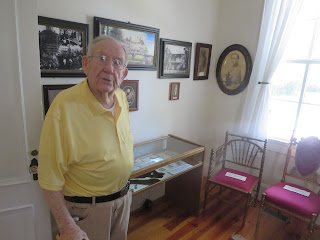 I saw Whitaker last summer while visiting the Longstreet Society for the first time in several years. He was there with Richard Pilcher, a longtime member and former president of the group. Pilcher told me this week that his colleague was still volunteering at the hotel once a week, despite health problems.

“Joe was our rock and I guess I thought he would never leave us and now he is gone. I have cried several times today,” Pilcher told the Picket in an email. “Joe was a graduate of Gainesville High School and North Georgia College (UNG), a US Army veteran, a patriot, a Christian, the first director of the Piedmont Hotel Museum and my dear friend.”

Clarke told the Gainesville Times that visitors who returned to the Piedmont Hotel would remember Whitaker's face, but not his name. Clarke said they would ask, “Is that (the) man that knows everything here?”

The funeral for the Gainesville native and former wholesaler and warehouse manager is Saturday. A memorial for Whitaker will be held by the society at a future date.
Posted by Phil Gast at 7:34 AM 1 comment: 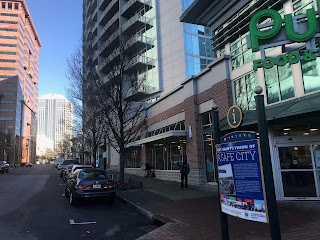 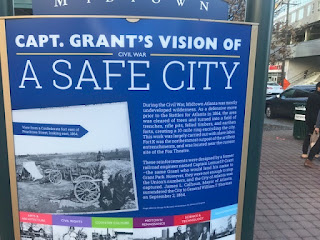 For those largely unfamiliar with Atlanta, Midtown is exactly that -- a hip neighborhood between downtown – scene of war time habitation and activity – and tony Buckhead to the north.

We were in Midtown over the weekend to take in “The Lion King” musical at the venerable Fox Theatre. While waiting for family members, I snapped these shots several blocks to the northwest of the venue. (You can click the images to better read the text)

The intersection of Spring Street and Peachtree Pace is just to the east of the Downtown Connector and Georgia Tech. It’s amazing how much development continues to fill in Midtown parcels.

The sign describes the Confederate fortifications, built by slaves, just to the south. Capt. Lemuel Grant, a former railroad engineer, led the construction of the strong defenses that helped keep Union forces at bay until action south of Atlanta forced the Rebels to leave and city officials to surrender on Sept. 2, 1864.

Charlie Crawford, president of the Georgia Battlefields Association, said of this corner: “This corner in July 1864 would have been out in the country, albeit between the lines from 21 July through the two weeks thereafter. The Federal line ran roughly along Tenth Street. Three earthworks for Federal siege guns still remain in the belt of trees north of the Turner complex.  Looking at the relevant OR (Official Records) maps, I can't even find a residence nearby.”

10th Street and the Turner complex are just to the west of the Publix grocery store.

The distance between the Northern and Southern line, in the summer of 1864, was a no man’s land – home to rifle pits and picket posts – that now is the heart of the Georgia Tech campus, shown in this map overlay.

The original defensive line, built July-October 1863, was closer to the city and downtown, with its apex near the current Fox Theatre. Atlanta was vulnerable.

Slaves and other workers, in July 1864, furiously threw up more defenses, to the north and west of the old line, as Federal Gen. William T. Sherman’s troops closed in. “When the Confederates built the line they cut down almost all of the woods” that covered the current campus, according to Crawford. Lt. Gen. Alexander Stewart took command of the forces.


The Confederates used letters, X, Y and Z, to name their forts in the area. Fort Z was near the current administration building, known for the familiar Tech Tower. Fort Y rests below the campus student center or a nearby parking deck.

Fans of the Georgia Tech Yellow Jackets football team might be interested in knowing that the east-west Confederate line ran through what is now the south end of Bobby Dodd Stadium at Historic Grant Field, right next to the Downtown Connector. The Southern line also ran near what is now the landmark restaurant The Varsity, just east of campus.

While the text of the marker is accurate, Crawford says, the photo caption is incorrect. That may be because the photo might have been used more for illustrative purposes.

“Only a handful of people would know that the fort shown was actually southeast of the city, not east of Peachtree Street; and it's a Federal fort, at least at the time of the photo (October 1864).”
Posted by Phil Gast at 9:23 AM No comments:

Developers halted plans Friday for a sprawling entertainment and residential complex in Tennessee after archaeologists discovered what they believe are graves on a site near Fort Negley, which was built by slaves. The decision gave preservationists a victory in the latest clash between historic conservation and growth in Nashville, a booming city with a complicated racial past. • Article
Posted by Phil Gast at 9:10 PM No comments:

Will Calhoun statue get context plaque?

The City Council in Charleston, S.C., couldn't decide Tuesday whether to approve or change the language for a proposed plaque in front of the towering John C. Calhoun monument in Marion Square, opting to defer the issue altogether without agreeing on what to do next. • Article
Posted by Phil Gast at 9:50 AM No comments:

Story update: Kevin Kelshaw, media relations officer for the St. Johns County Sheriff’s Office, gave this update Thursday: “Speaking with members of the EOD unit, they will make every effort to preserve the cannonball. The only way that it will be destroyed is if they cannot determine that it is safe or if they can’t render it safe. They will take it to Camp Blanding, an Army camp nearby, for determination. ...  Another resident in the beaches area (in the past week) also turned in a similar cannonball from that era (above) but in much better shape. They will also look to render this one safe.

A bomb squad officer called to a neighborhood below St. Augustine, Fla., determined that a suspected cannonball is an 8-inch Civil War-era siege mortar round.

The St. Johns County Sheriff’s Office posted photos on social media Wednesday of what deputies found the day before at a home near A1A and Dondanville Road.

A report written by an officer who was first at the scene said a resident told the deputy he had made the discovery while burying his dog in the back yard about a year ago. He kept the corroding round in the yard.

“Due to not being able to verify if it had any explosive material or not, it was deemed a possible threat to public safety and was seized,” a social media post said. “Should anyone else locate items like this in #HistoricStJohns, please contact your local law enforcement as they may be dangerous if active.”

ATTENTION HISTORY BUFFS! Deputies responded to the area of A1A and Dondanville Road regarding a possible cannonball yesterday. When they arrived, they found this! The St Johns Sheriffs Office Bomb Squad determined that it appears to be an 8 inch Civil War era (siege) mortar. pic.twitter.com/w1PdVC66ja
— SJSO (@SJSOPIO) January 3, 2018

Further investigation will be conducted to determine the contents of the item, the report said.

The department did not indicate whether the round will be destroyed, which is often the case when law enforcement is called in. Sometimes, artillery rounds are rendered safe and kept for historical purposes.

“When a torpedo (as mines were then called) was found near Savannah about 15 years ago, the Fort Stewart EOD team was prepared to blow it up," Crawford told the Picket.

He said the Coastal Heritage Society contacted then US Rep. Jack Kingston's office, "Which intervened to take the more expensive option of rendering the mine safe and preserving it."

A museum conservator and local historian said such a find in the area is unusual.


“It would actually be pretty uncommon for Florida because there wasn’t a lot of Civil War action in this area,” Andrew Thomson, an archaeological conservator with the St. Augustine Lighthouse and Maritime Museum, told the St. Augustine Record.

Local historian Susan R. Parker told the newspaper: “It’s very interesting, because the only thing I am aware of was that there were some Union vessels offshore trying to block inlets here.” She suggested the possibility that the relic may have previously belonged to a collector, which also sounded plausible to Thomson.
Posted by Phil Gast at 4:26 PM No comments: