A remarkable section of armor plating that protected the rudder and propellers of a Confederate ironclad is on the road to being recreated after it was heavily damaged by an arson fire at a Georgia museum.

The National Civil War Naval Museum in Columbus has been raising money to rebuild the fantail for the CSS Jackson.

A June 2020 arson fire tore through a pole barn outside the building and severely damaged the fantail’s wood, making it impossible to use the pieces for the rebuild. The Chattahoochee’s wrought iron and cast iron engines, the iron plates from the Jackson’s armor and the iron plating to the fantail survived, though they were exposed to the thermal heat. No one has been arrested in the fire.

Museum Executive Director Holly Wait told the Picket in an email this week that work on the fantail alone will tally about $190,000. About $250,000 has been raised for related work.

Wait expects work on the fantail to be done by the end of 2022.

Conservators completed work on the Chattahoochee engines last year and they are on display next to that vessel. They also finished conservation of the fantail iron and wood and those pieces are stacked near the Jackson’s hull, along with a box of fasteners and other iron components. (The Picket stopped by in September and most of the photos with this blog were taken then.)

Southern Custom Exhibits of Anniston, Ala., will recreate the fantail using original iron. The burned wood covered by the armor is unusable but may be displayed in some fashion, Wait said.

The museum is accepting further donations here. Two anonymous donors have supported the fantail work thus far, officials said. The museum plans to build an exhibit focusing on the ship's feature once all work is complete. 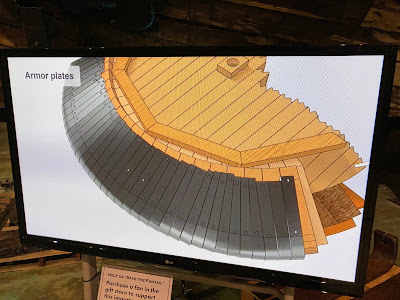 The fantail was the half-moon shaped rear deck of the Confederate warship, which was never fully operational. The section of armor and timber is a remarkable example of design and construction prowess.

Each plate of the fantail weighed nearly 400 pounds.

Following the fire, Terra Mare Conservators and others documented, cleaned and treated the Chattahoochee’s engines and the Jackson’s fantail.

Jeff Seymour, director of history and collections at the museum, wrote last year about the ironclad:

“As each level emerged, we were able to see elements of this vessel that no one has seen since 1864. As each level surfaced, several questions about how the Jackson was constructed were answered, but many more questions developed. Simply, this structure is much more complex than we thought heading into this project."

In 2019, Seymour called the fantail “a very unique piece of naval architecture” that’s believed to be the only Civil War example out of the water. Because the rear deck was curved, builders had to customize the length of the armor and timber.

“All of these pieces are cut into a pie shape to make it fit,” he said.

Robert Holcombe, a naval historian and former director of the museum, says besides the CSS Georgia in Savannah, it may be the only piece of wood from a Confederate ironclad with iron plating still attached.

Museum visitors can gaze at the hull of the flat-bottom ironclad from a viewing platform and on the floor. A section is missing, but you get a true sense of the vessel’s enormity – it was about 222 long and 57 feet across. Above the CSS Jackson’s hull is ghosting framework intended to show how the warship appeared above the water line. The rudder is missing.

The Jackson (originally named the Muscogee) was designed to protect Columbus – a critically important industrial center for the Confederacy -- from Union navy marauders and blockaders. Construction on the Jackson began in early 1863. It was built entirely in Columbus.

The Jackson’s casemate had a 35-degree slope and featured nearly two feet of wood and two layers of plating, mostly manufactured at the Scofield and Markham mill in Atlanta.

The vessel, armed with six Brooke rifles (two of which rest outside the museum), was finally launched -- after earlier unsuccessful attempts -- on Dec. 22, 1864, to local fanfare. 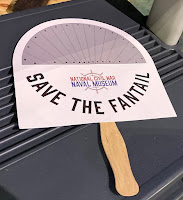 The two engines and four boilers – manufactured in Columbus – were not operational when the city fell, and there’s a question about how well they would have performed, anyway. At best, the Jackson would have done about 5 knots, said Seymour.

The ship still needed armor and was unfinished when the Federal cavalry arrived on April 16, 1865.

“The following day the nearly completed ship was set ablaze and cut loose by her captors,” a panel at the naval museum says. “After drifting downstream some 30 miles, the Jackson ground on a sandbar and burned to the waterline.”