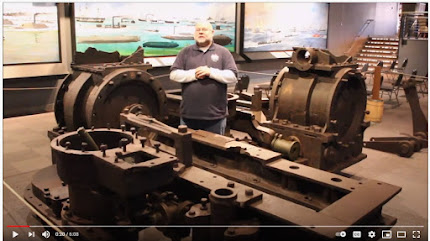 [Updated Jan. 27]
Months after an arson fire tore through an outside storage area at National Civil War Naval Museum in Columbus, Ga, engine components of the gunboat CSS Chattahoochee that survived the inferno have been conserved and moved inside, where they are exhibited near the vessel’s remains.

“This is a rare example of a steam engine … that still survives from the time period,” Seymour said of the Chattahoochee’s power system, which was built in Columbus and shipped downstream to Saffold, about 10 miles north of the Florida border, where the wooden boat was built.

Remains of the Jackson and the twin-screw Chattahoochee are the star exhibits of the museum and are inside the main building. Both were lost in April 1865 at war’s end -- the Jackson set afire by Federal captors and the Chattahoochee scuttled by its own crew. Neither vessel fired upon the enemy in their relatively short history. They were recovered from the Chattahoochee River in the 1960s.

For 20 years, the Chattahoochee piston heads and the locally made Jackson’s fantail were kept in a padlocked and fenced pole barn about 100 yards from the museum, awaiting funds that would make it possible to conserve and display them. A June 1, 2020, fire destroyed modern vessels and damaged the fantail’s wood.

The Chattahoochee’s wrought iron and cast iron engines, the iron plates from the Jackson’s armor and the iron plating to the fantail survived, though they were exposed to the thermal heat.

The fantail was the half-moon shaped rear deck of the Confederate warship, which was never fully operational. The section of armor and wood protected the vessel’s propellers and rudder and is a remarkable example of design and construction prowess.

A $10,000 reward was offered and federal agents were brought in to assist local authorities in the investigation.

“However, if new information becomes available we will evaluate the status of the case,” he wrote in an email. “In short, we just don’t have anything to (pursue) at this point …No one has been charged as of yet.”

Besides Civil War artifacts, the pole barn included modern craft and replica pieces. The Civil War items were long exposed to the elements and were slowly deteriorating.

The venue has a web page  that has kept the public up on the conservation of the engines and fantail.

Museum Executive Director Holly Wait said in an email, "The iron plating (and the wood) of the fantail were cleaned and conserved and are now inside the Museum.  However, because of the fire the fantail was dismantled piece by piece. We await more grant funding to build crates for the wood and recreate the iron fantail."

The most-recent web update says Terra Mare Conservators and others began their formal work in early September, documenting, cleaning and treating the engines and fantail. Seymour, director of history and collections at the museum, wrote: “Since the fantail was upside down, the wooden structure was the first part to receive attention. Each beam was documented and carefully removed for conservation work. Using a process called photogrammetry, the archaeologists took hundreds of images of each layer in order to better understand the structure.

“As each level emerged, we were able to see elements of this vessel that no one has seen since 1864. As each level surfaced, several questions about how the Jackson was constructed were answered, but many more questions developed. Simply, this structure is much more complex than we thought heading into this project."

Each plate of the fantail weighs nearly 400 pounds. They and Chattahoochee machinery underwent a blast cleaning using dry ice.
“In preparation for the engines, access panels were removed and the interior of these piston heads saw the light of day for the first time since the 1860s,” Seymour wrote. “In every cavity was Chattahoochee river mud. Many hours were spent removing mud from difficult places thanks to the help of some of our great volunteers.”

The Picket was allowed inside the padlocked and fenced shed in early 2019, with Seymour detailing the artifacts and their importance when it comes to understanding design and construction.

“Personally, I have to pinch myself every morning as a reminder that this project is really happening,” he wrote in the late 2020 update. “We have the best people in their fields working on this complex mission. And most importantly, we’re saving a few singular artifacts that are important to the story of Columbus and the nation.”

As for the Jackson armor still stored in the pole barn, Wait said the pieces will be conserved when funding allows.

"Visitors were understandably upset about the arson but delighted that the conservation project went ahead and that the pieces are inside," she wrote about the engine and fantail. "We await more funding to  complete the larger exhibition that ties all this together."