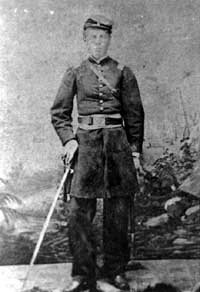 Capt. Louis Snaer (left) was a rarity: A member of the 73rd U.S. Colored Troops, he was among a small number of black soldiers to win an officer’s commission during the Civil War.

On the same day Confederate Gen. Robert E. Lee surrendered his Army of Northern Virginia at Appomattox -- April 9, 1865 -- the 73rd and eight other USCT regiments played a major part in the overrunning and surrender of Fort Blakeley, a Rebel bastion east of Mobile, Ala.

Snaer fell with a severe wound to the foot during the fierce attack, which was over in a half hour.

“He refused to sheathe his sword or to be carried off the field,” wrote Colonel Henry C. Merriam, the 73rd’s commander. “No braver officer has honored any flag.”

The combined Federal infantry and naval victory was the last such operation of the war. The courage of 5,000 African-American troops who fought at Fort Blakeley has since been the subject of articles and research.

Last month, The Conservation Fund, American Battlefield Trust and the University of South Alabama (USA) announced the long-term protection of 60 acres in the battlefield. The conservation easement was funded by a National Park Service grant of $293,000.

About 40 percent of the 2,000-acre battlefield already was owned by the state, much of it within Historic Blakeley State Park, which is north of Spanish Fort.

“However, what is arguably the most significant quarter of the battle site, where U.S. Colored Troops overran Confederate defenses in a raging assault, was unprotected until now,” the groups said in a statement. “The 60-acre property known as Blakeley Bluff is expected to contain valuable archaeological data related to this African American experience. The protection of this land will allow USA greater opportunities for archaeological digs, historical research and preservation of the battle site’s rich history.” 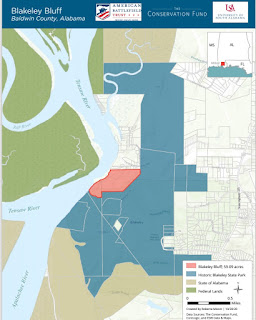 Mike Bunn, director of operations at the state park, which abuts the 60-acre parcel (shaded orange area in map at left), told the Picket that the newly protected land contains artillery positions, a portion of Confederate Redoubt 3 and part of the line between Redoubt 3 and Redoubt 2.

USCT troops were posted in an area fronting Redoubts 1 and 2 -- the northernmost Confederate fortifications along the line at Fort Blakeley -- during the weeklong siege. The 73rd planted a flag after it took Redoubt 2, one of nine such fortifications put up by Rebel troops. USCT units focused on Redoubts 1, 2 and 3 in the attack. Some of that land is now private property.

Bunn, writing last year for the Blue and Gray Education Society, said about 30 black soldiers were killed and nearly 150 wounded in the assault, a significant portion of nearly 400 casualties during the entirety of operations, which resulted in the largest Civil War battle in Alabama. White officers extolled the bravery of the regiments, comprised mostly of formerly enslaved men.

“Greater gallantry than was shown by officers and men could hardly be desired,” wrote Brig. Gen. Christopher Columbus Andrews. “The (troops) were burning with an impulse to do honor to their race, and rushed forward with intense enthusiasm, in face of a terrible fire.”

While the state park has been the subject of archaeological digs over the years, little has been done on the 60 acres, which are owned by The Conservation Fund and will be managed by USA.

The area is not just known for its Civil War history.

The land is part of a fragile ecosystem, featuring diverse plant life, tall bluffs, hardwood ravines and black water swamps, according to The Conservation Fund. Fort Blakeley was built along the Tensaw River, which flows south into the Apalachee River and Mobile Bay.

“The archaeological excavations and research that USA plans to do on this property has the potential to enhance what we know about the USCT that fought there,” Val Keefer of The Conservation Fund told the Picket.

Philip J. Carr, a professor of anthropology at the university, said the conservation easement “will allow for a systematic exploration of the property to better understand the cultural resources that are there, both prehistoric and historic. USA students will be involved in systematic archaeological survey of the property at some point in the future.”

They wanted to prove themselves men

Although Union Adm. David Farragut has bottled up Mobile in the summer of 1864, it remained in Confederate hands.

The arrival of additional Federal troops in early 1865 brought about the campaign to take Fort Blakeley, Spanish Fort and other guardians east of Mobile, a vital transportation and supply center.

“There are good elevations around here,” Bunn told the Picket in 2017. “If you want to take Mobile the easiest route would be via the eastern shore … and come from the north.”

Confederate commanders used soldiers and slaves to build the earthen fortifications. Fort Blakeley was built following designs typical for a defense against a ground attack. It was commanded by Brig. Gen. St. John R. Liddell (left).

Union troops, a third of which were USCT regiments, laid siege of Blakeley for about a week.


About 180,000 men, most of them former slaves but others free men of color, served in the US Colored Troops in the last few years of the conflict. While they were often relegated to guard duty, supply work or manual labor, they fought at Port Hudson, La., Petersburg, Va., and Fort Blakeley, among a few other battles.

In his Blue & Gray article, Bunn writes: “The USCT units at Blakeley marched there from Pensacola as a division of troops led by Gen. Frederick Steele. They were to join other forces under Gen. Edward S. Canby for a move against Mobile. Brig. Gen. John P. Hawkins held overall command of the division, which he organized into three brigades led by Gen. William A. Pile, Col. Hiram Scofield, and Col. Charles W. Drew. USCT units including the 47th, 48th, 50th, 51st, 68th, 73rd, 76th 82nd, and 86th Infantries comprised these brigades. The majority of these men had enlisted in Louisiana, with one unit having formed in Missouri.”

The USCT regiments held the right flank of the Union line.

The two sides exchanged artillery and gunfire during the siege. The afternoon of April 9 was chosen for a massive assault on the Rebel defenses. Nearly 16,000 blue-clad warriors were up against 3,500 Confederates, half of whom were veteran troops.

Land mines a peril for attackers

A portion of the Black regiments were engaged in reconnaissance of a Rebel position but were pinned down in a firefight until the general assault. “They were one of the first units heavily engaged that afternoon,” Bunn said.

The Iron Brigader website also offers details of the battle and reports by Federal officers. Col. Scofield provided vivid detail about the 47, 50th and 51st regiments: “The command moved with a yell through the abatis and over torpedoes (mines), several of which exploded, driving the rebels from their works and guns, and in conjunction with the regiments of the other brigades which entered the works almost simultaneously, captured a large number of prisoners.”

By then Rebel gun emplacements had been overrun, the Iron Brigader says.

“Quite a number of men were killed or wounded by the explosion of torpedoes, which were exploded by stepping upon them,” Scofield wrote. "One man, Private Josias Lewis, Company K, Forty-seventh U.S. Colored Infantry, was, while under my own observation, severely wounded, losing a leg by the explosion of one of these infernal machines while guarding prisoners to the rear after they had surrendered.”

Bunn writes for the Blue and the Gray that the attack was “a short but bitter affair, featuring a grand, open-field charge through a storm of artillery and small arms fire and isolated pockets of fighting all across the 3-mile line. By 6:15 p.m. the last shots of the battle had been fired, and Fort Blakeley lay in the possession of the victorious Union Army. During the battle, USCT units captured over 200 men and several pieces of artillery and sustained some of the heaviest casualties of any unit engaged.”

Early in the battle, USCT troops heard racial epithets uttered by Confederate troops, but they were not swayed from their intention of proving themselves. Once they reached the Rebel lines, close-quarters combat briefly raged before the surrender.

“Allegations that some Confederates were shot even after they surrendered to USCT troops surfaced almost immediately after the battle and the truth of what happened in its chaotic last moments continue to be the subject of research and speculation today,” Bunn wrote in the Encyclopedia of Alabama. “Available evidence indicates some Union soldiers indeed may have fired on Confederates who had surrendered, but there was no large-scale massacre.”

With the fall of Spanish Fort and Fort Blakely, Mobile could no longer be defended; Federal troops occupied the city on April 12. The war was essentially over by that point.

Capt. Snaer, considered a free person of color in New Orleans upon his joining the Louisiana Native Guards in 1862, spent six days in a field hospital after his wounding at Fort Blakeley. He mustered out in November 1865. After the war, he moved to California and died there in 1917, at age 75.

The bravery of Snaer and his comrades at Blakeley came before American-Americans attained full citizenship and civil rights. Now their legacy can be further explored on the protected site.

“Because of the landscape’s history, farming on the old battlefields was limited and the distinctive soils held impressions for centuries,” The Conservation Fund says of the battlefield. “Trenches, gun emplacements, batteries and other marks of battle are still prominent and intact, providing opportunities for archaeological digging, data collecting and vivid interpretation of the often-untold history of these troops.”