A man of contradictions: Visiting the home of 'Little Alec' Stephens, Confederate VP 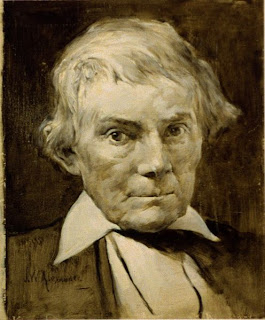 From the pedestal on the fresh-cut lawn of his home, Liberty Hall, the Georgia statesman looks south toward the downtown of Crawfordville, a small town that sits on the sidelines of Interstate 20 and prosperity.

Most known for serving as vice president of the Confederacy, Stephens lived nearly 50 years at this residence that served relatives and wayfarers traveling between Atlanta and Augusta, which is about an hour east of Crawfordville.

I visited A.H. Stephens State Historic Park on Easter Sunday, while my family was away. Walking first through the small downtown was a journey back in time. Kudzu vines climbed red brick walls of abandoned businesses. And while the main street (U.S. 278) has a few antique businesses, many of the buildings are shuttered. 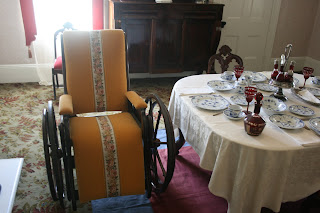 A courthouse expansion and a branch of Athens Technical College seem like the only new touches in Crawfordville. 2010 Census signs hang near the Taliaferro (pronounced Tolliver) County courthouse. The tiny county has only 2,000 residents, and is trying desperately to hang on to every one.

“When they put I-20 out there [in the 1960s] the town just dried up,” said parks employee Margie Edwards, who gave me a fine tour of Liberty Hall and a museum housing a collection of Confederate and civilian artifacts from the period.

The mid-19th century surely was a busier time for Crawfordville. The trains dropped off passengers while others rode carriages to and from Atlanta and Augusta. 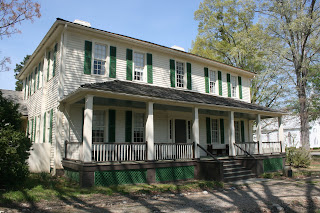 Born in 1812 a few miles outside town, “Little Aleck" Stephens, an accomplished orator, topped out at 96 pounds and was frail most of his life. An accident ruined his hip. He often used a wheelchair and crutches.

While his voice was described as shrill and unpleasant, at the beginning of the Civil War a northern newspaper described the statesman, who also suffered from depression, as "the Strongest Man in the South" because of his intelligence, judgment and eloquence.

The brilliant attorney was elected governor, U.S. senator and U.S. representative. In 1848, he was stabbed by a political foe in Atlanta.

Stephens appears to me a man of contradictions.

Stephens at first opposed secession, but became vice president of the Confederacy. Believing that President Jefferson Davis was dictatorial, the vice presidency was a string of frustrations for Stephens, who favored states rights, opposed conscription and eventually sought peace negotiations. 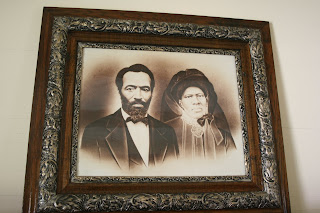 “Little Alec” served nearly five months in prison after the South surrendered In 1865. He wrote, “A Constitutional View of the Late War between the States” (1868-70), his two-volume apology for the Confederacy.

Stephens had about 35 slaves on his farm. By all accounts, he treated them better than many and ensured many were educated, even after the war. Some sources said he personally opposed slavery. Publicly, however, he declared slavery as the natural condition of blacks. (Above, two of his slaves, Harry and Eliza Stephens)

Fond of wine and games of whist at Liberty Hall, Stephens was a longtime friend of Robert Toombs, a robust and blustery politician who appeared in many ways his opposite. An upstairs room at Liberty Hall was reserved for Toombs when he made a visit. Relatives of Stephens lived upstairs. 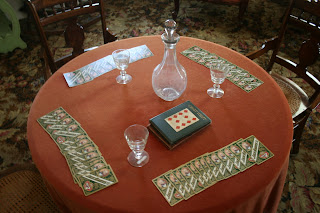 Liberty Hall, while by no means sumptuous, was a comfortable stopping point. Because of his infirmities, Stephens, a lifelong bachelor who was orphaned when 14, lived on the first floor of the home, next to the men’s sitting room.

“The beds Stephens would sleep in were in the north-south direction,” Edwards told me. “Someone told him the magnetic currents were good for him.”

Many of the pieces in Liberty Hall, including an earthen commode and sofa, are original. A building in the back of the home served as a library for Stephens, who died in 1883 while serving as Georgia governor. He is buried with his stepbrother, Linton, in front of the home.

The museum isn’t long on interpretation but has a few nice belongings and many quotations from the Civil War. 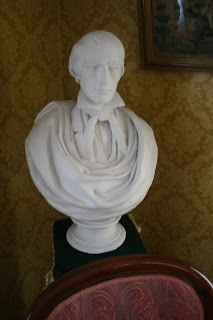 One of my favorites, penned by a Georgia private on the march to Gettysburg, reads, “I saw a little girl probably about eight years of age, standing on the stoop in front of her house and heard her say, ‘Mama, are these men rebels?’ ‘Yes my daughter.’ ‘Why Mama, they haven’t got horns. They are just like our people.”

Parking at the state park is $5. The tour of the home and museum costs an additional $4.

• Click here for more information of the historic site.
Posted by Phil Gast at 11:27 AM