A budget shortfall has Georgia late out of the gate in marking the Civil War’s 150th anniversary. The state’s Department of Economic Development hopes to launch a sesquicentennial Web site in October or early November. Some 16 states already have sites that promote such events and places of interest.

Working with the Georgia Civil War Commission (GCWC), the department also is updating and expanding the book “Crossroads of Conflict,” a book guide to more than 350 sites across Georgia. The revision also should be out in the fall.

Some $500,000 initially meant to promote events was cut from the state budget. Instead, Brown says, the department is using discretionary money and support from the Georgia Humanities Council to build the Web site and promote events.

Across the country, local governments and tourism leaders hope to bring in money from Civil War re-enactments and heritage tourism. But trying to raise money for marketing campaigns during a recession and major state budget shortfalls has proven difficult.

The GCWC, for example, currently has no funding for next year. It was able to provide less than $50,000 to the state for the Web site and “Crossroads” update.

“We’re in the early stages of developing the Web site,” says Brown. “It is meant to build heritage tourism.”

Georgia’s sesquicentennial Web site will mirror the state’s approach to tourism, breaking it into nine regions. Brown expects the site will include a guide to sites, 150th events, the war day-by-day and soldier diaries. A Civil War timeline also will be posted.

“The state has no plans to mark the sesquicentennial at this time,” Brown says. 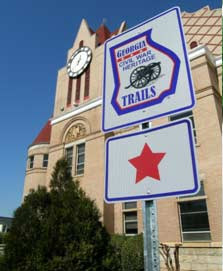 Its main mission is education, economic development (tourism) and preservation, says executive director Steven Longcrier. His organization gets little state money, depending more on cities, counties and the U.S. Department of Transportation for interpretive sign grants.

“Our Web site will greatly expand as more of the elements of our trails are in place,” says Longcrier.

“Although Georgia Civil War Heritage Trails is not a heritage tourism program that begins or ends with the Civil War sesquicentennial, the increased public awareness brought about by this significant anniversary is certainly benefitting our efforts, too,” Longcrier says.

CWHT is working to have three of six heritage trails in place by the war’s sesquicentennial: The Atlanta Campaign, the March to the Sea and Confederate President Jefferson Davis’ unsuccessful effort to avoid capture by the troops in blue. The trails are meant to be driven and are supplemented by interpretive markers. 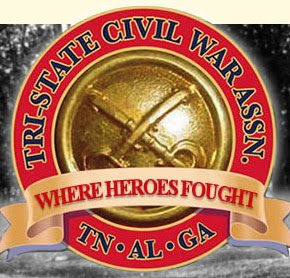 Culpepper, who also serves as city manager in Chickamauga, recently started the Tri-State Civil War Association to combine resources and promote related sites and events in Georgia, Alabama and Tennessee. The Battle of Chickamauga re-enactment in 2013 will be the largest in the Deep South.

The Tri-State Web site is selling sponsorships and the group will produce 100,000 rack cards.

So far, the association has brought in $18,000 from member cities and counties in northwest Georgia, southern Tennessee and eastern Alabama, Culpepper says. "By pooling our resources together, we can get the job done," Culpepper told the Chattanooga Times Free Press.

Like Brown, he stresses the importance of the Civil War in Georgia. The Confederate loss of Atlanta assured the re-election of President Abraham Lincoln.

“We are promoting the war ended in Georgia,” says Culpepper.
Posted by Phil Gast at 4:14 PM