Fort Tyler: Last fort to fall in war worth a visit

At 16, Alexander Campbell Lanier joined the war, got captured and missed supper -- all on the same day. 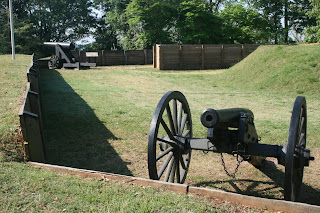 Lanier had slipped away from his West Point, Ga., home when fighting began that morning and rushed uphill to Fort Tyler at the town’s highest point.

But the town’s resistance to 3,500 Union forces ended the evening of April 16, 1865, after the death of the earthen fort’s commander, Gen. Robert C. Tyler (below), a dozen other Confederates and the surrender of the outgunned garrison.

Lanier and approximately 250 soldiers and civilians were marched to the town below. The family was not aware of his being at the fort until he waved at his mother as he was passing the house. 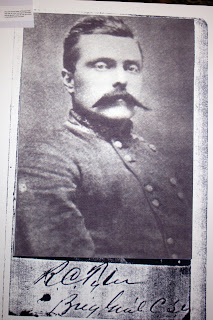 Fort Tyler is a small footnote to the closing days of the war. It was taken a week after Lee surrendered at Appomattox and one day after President Abraham Lincoln died of a mortal shot to the head. Combatants knew of neither occurrence.

Townspeople are proud of this last-ditch resistance to Union troops bound on destroying vital railroad facilities. Because the gauges of the rails were different between Alabama and Georgia, train cargo had to be transferred between cars here, which necessitated a large railroad yard in West Point. Confederates meant to guard a wagon and railroad bridge.

“There are people here who have ancestors who were in the fort,” says Fort Tyler Association President Rea (pronounced Ray) Clark.

I paid a visit this week to West Point, which straddles the Chattahoochee River at the Alabama border near Interstate 85. Today, the town is best known for great fishing at West Point Lake and the new Kia Georgia manufacturing facility a few miles northeast of town.

Fort Tyler, the last to fall in the Civil War, might be called Fort Stateline, since a portion is in Alabama and another part is in Georgia. The fenced property abuts several residences. 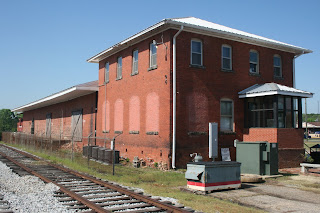 Clark quipped that rifle demonstrations are OK, but not artillery. “We don’t want to have to pay for broken windows.”

The fort has quite an unusual history.

Yankee troops burned two depots in West Point and blew up the powder magazine in the fort, creating a crater. Around 1897, the city filled in the hole with concrete and made a reservoir, which operated until the 1920s or 1930s.

That’s when townspeople got busy. They raised money and rebuilt the fort in 1996-97, dedicating it in 1998. Because there are no photos of the fort, they worked from first-hand accounts to re-create the 35-yard rectangular salient.

I was impressed by the many interpretive signs that line the shaded zig-zag trail to the top. You can walk through the fort and learn more about its three artillery pieces. 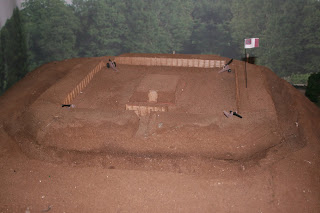 Clark said a living history and fundraising dinner were held last week on the Battle of West Point’s 145th anniversary.

The association and the West Point Visitors’ Center will soon begin filming a 17-minute film on the battle. It will be shown to visitors and schoolchildren at the Visitors’ Center in the old downtown depot.

“It will be Ken Burns caliber but without a Ken Burns budget,” Visitors’ Center Executive Director Malinda C. Powers says of the film.

For now, the association uses its Web site to publicize the well-maintained fort. Clark says he doesn’t know how many visitors the venue draws. 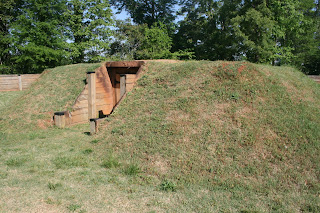 He’s hoping the Visitors’ Center can one day house a Fort Tyler museum and some relics found on the property.

The Visitors’ Center opened last year in conjunction with the Kia plant beginning operations, says Powers. She hopes business will pick up downtown when the economy improves and Kia workers start buying homes.

“Once we get people moving in we will have more stores.”

The Kia plant is a boon for West Point and nearby Alabama towns, which were home to cotton and textile manufacturing plants, long gone overseas.

I concluded my visit with a stop at Pinewood Cemetery, where Gen. Tyler and 76 Confederate and Union troops, most of them unknown, are buried. 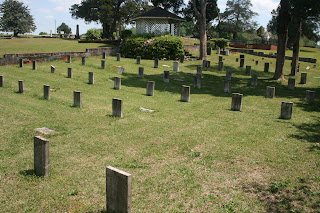 The enigmatic Tyler, who lost a leg earlier in the war, was shot by a sniper and died under a battle flag made by the ladies of West Point. He was the last general to die in the Civil War.

From West Point, Union Gen. James Wilson's Raiders destroyed 19 locomotives and burned 340 cars, and moved east up the tracks to LaGrange and eventually to Macon.

• Click here for more info on the Fort Tyler Association.
Posted by Phil Gast at 3:53 PM