Mackinac Island in Michigan briefly housed three Southern prisoners. Here's what we learned about them during a recent visit

Above the throng of tourists enjoying the restaurants, water views and fudge shops of Mackinac Island in Michigan stands a fort that briefly held three Southern prisoners during the Civil War.

I recently spent a few hours on the island, gawking at the Grand Hotel, moving to the side of roads to make way for carriage rides and taking a look at picturesque Fort Mackinac (pronounced Mackinaw), which is perched above the harbor. Before the visit, I did not know anything about its brief Civil War episode.

Fort Mackinac, now a state park, is most famous for two clashes during the War of 1812. But during the summer of 1862, it housed three Tennesseans who military Gov. Andrew Johnson (later president) had ordered arrested for support of the Confederacy and “treasonous inclinations.”

“Johnson felt that the wealthy, planter class of the South was part of the reason for the war and he wanted the three men removed from Tennessee,” the fort’s website says.

Secretary of War Edwin Stanton arranged for the trio to be sent to Michigan.
Fort Mackinac had largely been used as deployment center during the mid-19th century and was not in much use when the Civil War began.
But after the arrests of Judge Josephus Conn Guild, Washington Barrow and William G. Harding, officials prepared their quarters and secured a 90-member militia unit, the Stanton Guard, from the Detroit area.

The prisoners, all from the Nashville area, were able to walk the grounds on their own, being confined to their quarters at night. They could walk downtown under guard but were not allowed to interact with anyone. The men were never criminally charged; instead they were considered political or state prisoners.

The park’s website provides this information about the three:

“Judge Guild was originally from Virginia, had served in the Tennessee legislature and was a founder of the Louisville and Nashville Railroad. Washington Barrow was a lawyer who served as a congressman and attorney general in Tennessee. He signed the Tennessee secession ordinance and helped finance a Confederate cavalry company. William G. Harding owned the 3,500 acre plantation Belle Meade where he raised thoroughbred race horses. He served as adjutant general of the Tennessee militia.”

According to the Tennessee Encyclopedia, Guild was outspoken in his support for the Southern war effort. Early in the Civil War, Harding headed the Military and Financial Board of Tennessee, which spent $5 million arming and equipping Rebel soldiers.

The three prisoners were on the island during its most pleasant months. Perhaps with thoughts of a possibly harsh winter ahead, Guild and Harding took a loyalty oath and were allowed to return to Tennessee.

Barrow was shipped to the military prison at Johnson’s Island in Ohio. He refused to take an oath but was exchanged in March 1863. 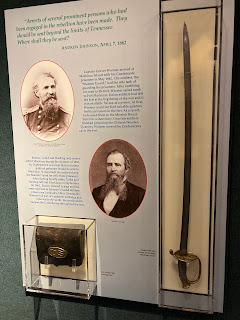 “Barrow returned to Tennessee, ran unsuccessfully for Confederate governor of the state, and spent the balance of the war as a private with the retreating Army of Tennessee,” the encyclopedia says. “After the defeat of the Confederacy, Barrow returned to Nashville, broken in health and financially ruined. He died within the year.”

Fort Mackinac was largely not garrisoned for the remainder of the war.

Several of the park’s 14 buildings go back before the Civil War, including its signature blockhouses and barracks that housed the Stanton Guard.

I enjoyed strolling the grounds and ramparts, and took in seasonal rifle firing and signal flag demonstrations put on by the staff.

Much of the programming focuses on the Army’s use of the fort in the 1870 into the 1890s, when it was deactivated.

Fort Mackinac is one of few surviving Revolutionary War forts.