An Illinois community has opened a museum that celebrates its culture and history, including a Civil War cavalry general who went on to lead a regiment of Buffalo Soldiers, the celebrated African-American troops who served in the West.

The Jacksonville Area Museum, which formally opened its doors this past weekend, has a display that details President Abraham Lincoln’s ties to the community and individuals from that time period. 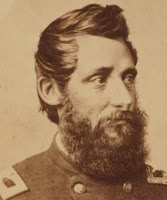 Among them was Brig. Gen. Benjamin Grierson (left), whose Jacksonville mansion is available for tours by appointment. Grierson, a music teacher and band leader before the conflict, wrote music for Lincoln’s presidential campaign in 1860.

He joined the cavalry and in November 1862, became a brigade commander in the Army of the Tennessee. In 1863, he led a successful raid deep in enemy territory that drew Confederate resources away from the Federal assault on Vicksburg. He took part in other successful campaigns in the next year and a half.

Perhaps Grierson’s biggest legacy is the formation of the 10th Cavalry Regiment after the war. The Buffalo Soldiers, who later on comprised several regiments, are remembered for their courage, discipline and low desertion figures when compared to other units.

The 10th was formed in 1866 and based in Fort Leavenworth and then Fort Riley, Kan. It took part in several campaigns against Native tribes. Initially, Buffalo Soldier units were led by white officers. They often faced prejudice within the U.S. Army.

Grierson was a colonel when he commanded the troops for a few years. He exhibited his own bravery when it came to colleagues.

“Grierson's faith in these troops, his respect for Native American culture and his lack of West Point credentials all combined to distance him from his fellow officers and superiors,” the National Park Service says. “Nevertheless, Grierson went on to a distinguished career in the post-war army and he retired a brigadier general in 1890.”

A native of Pittsburgh, the soldier lived in several states, including Illinois. He died in Michigan in 1911 and is buried in Jacksonville, a community of about 20,000 residents west of Springfield.

The museum, which is housed in an old post office, includes a portrait of Richard Yates, Illinois’ Civil War governor and a reference to James Jaquess, a soldier and private agent for Lincoln during the war. Jaquess spoke with Confederate President Jefferson Davis about potential peace.

Among items in the museum’s collection are letters, photos, diaries and a sword that belonged to Lt. William L. English, a Jacksonville native who served in the conflict and during the Indian Wars. He died in 1877 from wounds received while fighting the Nez Perce at the Battle of the Big Hole in Montana.

David Blanchette, board chairman of the museum, told the Picket the English items are not currently on display, but will be brought out on special occasions.

An intriguing item in the collection, which the Picket wrote about in March, is a rusted bayonet uncovered by a resident while using a garden tiller in May 2002. He donated it to the museum this year.

No one knows for sure how it got there, but Blanchette says it could have been left by a soldier with the 21st Illinois Infantry, which marched through the town in July 1861.

The unit was commanded by Col. Ulysses S. Grant, who was leading the troops to Missouri, where he would begin his rise to fame.

For now, the bayonet remains on display at Market House Antiques, near the museum.

“Most customers are amazed by the bayonet and think it is a great find,” says owner Nick Little.

Jacksonville’s Civil War history is only a small part of the exhibits, which cover industry, the arts, local colleges and more.

“The public’s reception so far has been tremendous and very supportive. This newest attraction for the city of Jacksonville should prove to be a great educational and economic development resource,” said Blanchette.

The Jacksonville Area Museum is open on Wednesdays, Saturdays and Sundays from 10 a.m to 4 p.m. There is no admission fee, although a $5 donation is suggested.