Twenty years ago today, a giant 'Spider' lifted the USS Monitor turret from the ocean floor. It's still cause for celebration, including this weekend

At 5:47 p.m. on Aug 5, 2002, the turret of the USS Monitor broke the surface of the Atlantic Ocean off the North Carolina coast, the crowning achievement in the recovery of much of the legendary Civil War ironclad.

The operation utilized an eight-legged contraption dubbed the "Spider," which locked around the upside-down turret and lifted it from the ocean floor, 140 years after the USS Monitor sank during a storm off Cape Hatteras.

The National Oceanic and Atmospheric Administration (NOAA), the U.S. Navy and the Mariners’ Museum and Park in Newport News, Va., where the giant artifact has been in a conservation tank since its recovery, this week have been recalling the momentous turret recovery.

A webinar about recovery of the ironclad’s principal components was held Tuesday. 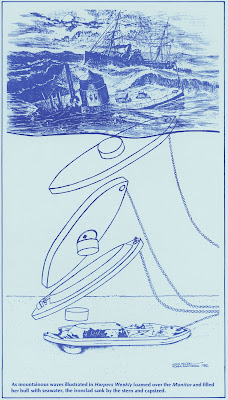 The museum on Saturday will mark the 20th anniversary (NOAA image left), with programs set from 10 a.m.-3 p.m. ET. Speakers include Will Hoffman, chief conservator of the Monitor, and John Broadwater, who was part of recovery operations. You can find more details about the events here.

The Mariners’ Museum has been conserving the vessel’s two large Dahlgren guns. Responding to a Facebook question this week about the turret’s orientation, officials said:

“The turret will be flipped right side up in the next year or two to continue conservation work, so we should definitely be able to display it correctly. The guns will most likely be displayed separately since we will want to do everything we can to preserve all of the artifacts.”

While much of the USS Monitor’s wreckage has remained on the ocean floor since Dec. 31, 1862, the turret, guns, anchor, engine components and thousands of artifacts are housed at the Mariners’ Museum.

Researchers found the wreckage of the USS Monitor in 1973 and subsequent trips included the recovery of a famous lantern and anchor. Between 1998 and 2001, most of the engine room was excavated and brought ashore.

Hoffman, in a blog post this week, wrote about the unique and meticulous recovery involving divers and crews in a barge above.

“Due to the turret being upside-down, the weight of all artifacts and marine debris within it rested on its roof, which was not designed to handle it all. Therefore, once in the spider, the iconic object would be picked up slightly off the seafloor and set onto a lower support pad which would then be affixed to the spider, creating an ‘artifact Oreo.’ This would ensure no objects would be lost as the turret was brought up.”

The turret popped to the surface with much fanfare on Aug. 5, 2002. The artifact was brought to Newport News a few days later, greeted by pleasure boats and a 21-gun salute. The turret was then trucked to the museum in an informal parade.

On March 6, 1862, the new Union ironclad – its radical design dubbed “Ericsson’s folly” by its doubters -- steamed down New York City’s East River for the short journey to Virginia. There were doubts about whether the Monitor could withstand the seas and intense enemy firepower; it fired only two cannons from the revolving turret.

But the small ship quickly challenged the heavily armored CSS Virginia upon arrival and ended the latter’s rampage against Federal ships. The stalemate foreshadowed the end of wooden warships.

An expedition in May, utilizing an underwater robot, visited the USS Monitor and other shipwrecks in the Monitor National Marine Sanctuary. According to media reports, officials said the ironclad was in better shape than expected, probably because of its superior construction.

"During those (2002) projects, it was necessary to cut into the ironclad's armor belt, hull, and deck to gain access to the turret since the shipwreck was on top of it,” said Tane Casserly, resource protection and permit coordinator at the sanctuary. “The question for us at NOAA was, did those cuts into the shipwreck cause further deterioration? Would we see significant changes caused by these actions today?"

The answer to those questions "was a resounding 'No'," Casserley told McClatchy News.