National Park Service technicians will bring new life to the bronze Virginia Memorial at Gettysburg, applying a patina that will remedy its current dull and flat finish.

The 41-foot memorial, dedicated in 1917, was the first Confederate state monument at Gettysburg National Military Park, and it came with controversy. Union veterans objected to its construction and officials had to walk a tightrope regarding its inscription.

The park on Monday provided details of the preservation project, which will begin by Sept. 6 and conclude by Sept. 30. It said the current brown ferric patination, applied in the 1980s, has failed in many areas and left the memorial with “little to no depth when viewed.”

Patinas bring a creative effect and highlight striking features of a work.

“It’s used to accentuate pieces, provide contrast, imply age, introduce color to the bronze, and sometimes to add a dose of reality to our detailed statues,” according to the Randolph Rose Collection, which makes bronze pieces. (It is not involved in the Gettysburg project).

The NPS said the existing brown patina on the Virginia memorial is not original to the work. The agency’s Historic Preservation Training Center will correct appearance and wear issues by removing the current sealer, patina and corrosion. (NPS photos above, below. Click to enlarge) 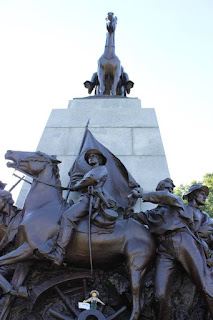 “When reduced to a bare metal surface, a patina of sulphurated potash will be applied, and this surface will be sealed with clear microcrystalline paste wax. The use of a sulphurated potash patina has been historically documented on work at Gettysburg NMP and is very stable for outdoor exposure. The new patina will result in a darker finish that is historically correct and is the primary sealer in use for bronze elements throughout the park’s monument collection.”

The memorial honors the 20,000 Virginians who fought at Gettysburg and their commander, Gen. Robert E. Lee. The general and his horse Traveler look toward the area of Pickett’s Charge, the disastrous failed attack on July 3, 1863. Below them are figures representing artillery, infantry and cavalry.

The American Battlefield Trust has a detailed article on the monument’s history and how its backers helped perpetuate the Lost Cause narrative rather than reunification.

In 1912, Virginia submitted this proposed inscription:

TO HER SOLDIERS AT GETTYSBURG

THEY FOUGHT FOR THE FAITH

The head of the Gettysburg National Military Park Commission objected, believing the wording would bring criticism and violated regulations that inscriptions be without “censure, praise or blame.”

The approved wording was:

VIRGINIA TO HER SONS AT GETTYSBURG

The monument was designed and sculpted by Frederick William Sievers.

He used photographs and a life mask to capture the features of Lee’s face, according to the Gettysburg Daily website.

“Those who knew Lee, and who were living at the time of the monument’s dedication, thought this sculpture was the best likeness of the general,” Gettysburg Daily says.

“Traveler’s bones were on display in Lexington, Virginia, where Lee had settled before his death. Sievers found a live horse that matched the size and shape of the bones as a model for Traveler.”
From the NPS: The immediate grass circle around the memorial will be closed during this project. The circle drive around the memorial is expected to remain open with intermittent closures to facilitate the work and visitor safety.