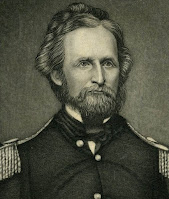 The bed on which the body of Union Brig. Gen. Nathaniel Lyon (left) was laid is the centerpiece of the newly renovated visitor center and museum at Wilson’s Creek National Battlefield in southwest Missouri.

Officials last week unveiled the $3.5 million renovation project, which expands exhibit space by about 1,800 feet, park Superintendent Sarah Cunningham told the Picket in an email. The work was supported by Wilson’s Creek National Battlefield Foundation and the National Park Foundation.

“The new exhibits will highlight more of the park’s collection Civil War artifacts as well as new audio-visual exhibits. This makes it possible for people to view historic weapons demonstrations and digitally view fragile artifacts and other items in storage,” she said of kiosks and other features.

The Battle of Wilson's Creek on Aug. 10, 1861 -- the second major battle of the war -- resulted in a Confederate victory after its forces made multiple assaults on Union lines. Federal troops retreated to Springfield.

Though victorious on the field, the Southerners were not able to pursue the Union forces. Lyon lost the battle and his life, but he achieved his goal: Missouri remained largely under Union control.

Visitors will see approximately 90 percent of all edged weapons and firearms from the park’s museum collection and will learn the history of 19th-century firearms technology and how it affected the outcome of the war, Cunningham said.

A featured firearm is a rare Model 1860 Henry repeating rifle (above), recently donated to the park by the Wilson’s Creek National Battlefield Foundation. While the weapon was made in 1864 and has no connection to the fighting at Wilson’s Creek, the rifle belonged to George Fulton, a Missouri veteran of the Trans-Mississippi Theater of the Civil War. The Henry was among the most technologically advanced weapons of the conflict.

Cunningham said the park will be able to display additional items from the collection of Trans-Mississippi Theater artifacts purchased from Dr. Thomas Sweeney in 2005.

The original “Lyon bed" (below) belonging to the John Ray family previously was displayed at the historic Ray House. Park officials wanted to feature the artifact and secure its future in the climate-controlled museum. A reproduction bed is now visible in the Ray House.

While the Ray House was not hit by fire, it was in the thick of the fighting during the battle.

“As soon as the battle ended, the family emerged from the cellar to find their farm house was now a hospital, and immediately began to assist medical personnel in treating the wounded and dying,” the park says on its web site.

“The children made many trips to secure water from the springhouse for the suffering soldiers. Later, the body of General Nathaniel Lyon was brought to the house and examined before it was removed to Springfield under a flag of truce. Roxanna (John Ray’s wife) supplied a counterpane, or bedspread, to cover the body. While most of the wounded were quickly removed to Springfield, one soldier would convalesce with the Rays for several weeks before he could be moved. In addition, most of the family's livestock and crops were gone, foraged by hungry soldiers.”

According to the Aurora Advertiser newspaper, two new exhibits showcase the loading and firing of artillery and their transportation. Other cases included possessions of civilians caught up in the fighting.

An exhibit focuses on the Confederate Pulaski Light Artillery Battery. The Arkansas unit engaged in a furious exchange with a Federal battery at Wilson’s Creek, and it checked Lyon’s advance.

A 2018 article in Emerging Civil details the battery's trial by fire and the acclaim it received for helping turn the tide of the battle.