'Turning back the clock': Gettysburg web page details restoration of James and Eliza Warfield home to how it looked during battle 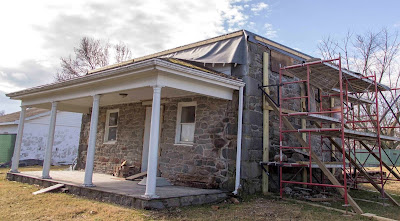 Staffers at Gettysburg National Military Park are chronicling the return of the James and Eliza Warfield farmhouse to its 1863 appearance through an online page featuring video, photos and an overview of the restoration project.

Those visiting the page are getting a behind-the-scenes look at the work, which includes the removal of postwar additions, including aluminum siding and side buildings. The home’s height has essentially been chopped in half to 1.5 floors, while retaining the original stone walls.

James Warfield, one of many free African-Americans in Adams County, and his family fled as Confederates neared Gettysburg. They were afraid they could be sent south and enslaved. The blacksmith’s home overlooked much of the July 2-3, 1863, battlefield and was in the thick of action.

The park recently posted a video giving an overview of the work and showing original features, such as window frames that were covered after the war or made into a doorway.

In the video, Chris Gwinn, chief of interpretation and education, talks with park exhibition specialist Jonathan Holdsworth about how crews are taking the home back to its original two-room footprint. Before demolition of modern aspects began, the home was barely recognizable due to changes and additions made by subsequent owners. Holdsworth explains the sections of the house that are masonry are original, and he points to old beams and plaster walls.

“The biggest challenge we are facing was the method of construction used at the time,” he says in the video. Because there was little or no lime in the mortar, the packed soil “didn’t have a lot of structural stability.” Crews are putting in stronger bonding material and are filling in any wall gaps with infill stones from the park’s stockpile.

Park spokesman Jason Martz told the Picket the first phase of restoration wrapped up near the end of 2019. That included stabilizing the original stone structure, filling in non-historic doorway and window openings and re-creating historic windows where appropriate.

“Once this was accomplished, an outside contractor began to strategically deconstruct the non-historic sections of the house. This included removing the breezeway between the house and the garage, the second and third stories of the house, and multiple add-on sections on the west side of the house. Park preservation staff then added a temporary roof to protect the inside of the historic stone house over the winter months,” he said.

Phase two will begin later this spring. Contractors will remove the front porch, modern structure foundations and the garage. “Park preservation staff will then build the historic second floor and front porch. The driveway will also be removed once all construction work has concluded. Landscaping will then consist of leveling the soil around the house and driveway areas and grass seed will be planted.”

The park says the Warfield house web page will be continuously updated, with additional photos and a time-lapse video of the project.

“The Warfield farm was very close to the fighting on July 2 and 3. Kershaw’s South Carolinians formed there for the attack, and artillery was posted just to the east of the house, drawing Federal counterbattery fire,” reads an article on the website Battle of Gettysburg Stone Sentinels. “Longstreet’s staff may have used the house as his headquarters for a time. Although some wounded were treated there, the buildings were never formally designated as a hospital, possibly because they were so close to the fighting.”