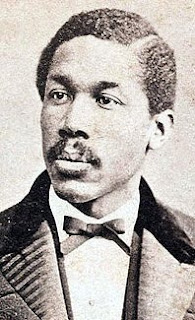 After Catto was murdered on Philadelphia’s election day in October 1871, a large crowd attended his funeral. City offices were closed. He was buried in his major’s uniform. Then, with a few exceptions over the next 140 years, his accomplishments and legacy faded into obscurity.

The city of Philadelphia has allocated $500,000 for a statue of Catto. A book about the man dedicated to equality, at a very personal price, was published two years ago. Local historical groups and societies have sponsored wreath-laying ceremonies around the time of his birthday.

This Saturday (Feb. 25), Catto’s dedication to community and public service will be remembered with the reissuing of a special medal to two members of the Pennsylvania National Guard. Previously, it was awarded only once, shortly after Catto’s death at age 32. 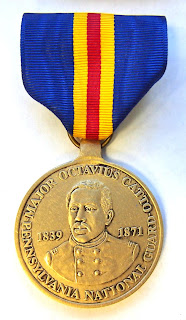 The ceremony begins at noon at the Union League, 140 S. Broad St., following a separate 11 a.m. wreath-laying at Sixth and Lombard streets near Catto’s home, sponsored by the Catto Society and the Gen. George Meade Society.

The Catto medal was created in the martyred citizen’s honor by a division commander and given to a deserving soldier, said Lt. Col. Lauren E. Muglia, director of policy and legislative affairs, with the Guard. “It disappeared at one point.”

The Philadelphian’s contributions to his city are numerous. He fought vigorously, and successfully, for the desegregation, of its mass transit system after the Civil War. He also helped win voting rights for African-American men in Philadelphia.

Ultimately, he was killed on election day by a white man while trying to ensure others had the right to safely cast their ballots. 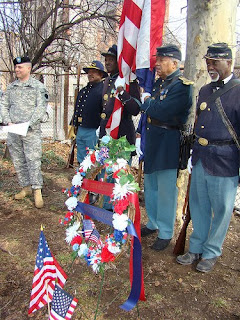 Andy Waskie, a professor at Temple University, said Catto rushed to enlist in the Union army after President Lincoln issued the Emancipation Proclamation in January 1863. That ultimately led to the formation of U.S. Colored Troops.

When Confederate Gen. Robert E. Lee moved his army toward Pennsylvania, the governor called for 50,000 citizens to form an emergency militia.

“Catto saw this as an opportunity,” Waskie told the Picket. He volunteered as a private and organized nearly 100 African-American volunteers into a company. “They were uniformed and mustered on June 17, 1863.”

They arrived at Harrisburg to receive weapons and further orders. But a general denied them service, on a technicality.

Disappointed but undeterred, Catto in the following months and years, working with the Union League and Frederick Douglass, helped recruit 11 African-American regiments for the Federal army.

“These units added greatly needed strength to the Union armies in the field,” according to the Pennsylvania National Guard. “A number of these troops distinguished themselves in combat and several Soldiers were awarded the Medal of Honor for bravery.” 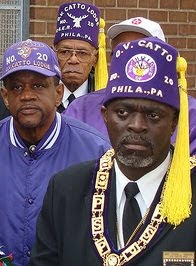 “He was a noted orator and rallied the troops to enlist,” Waskie said. “He set the agenda. He was a nationally known figure.”

Catto joined the National Guard soon after the end of the Civil War.

Bob Branch, 58, portrays Catto for Historic Philadelphia and other groups. His presentations include quotes by Catto and conversations on issues the intellectual faced.

“The struggle for equal rights is an ongoing struggle,” Branch said.