Trying not to fight the war over again

John W. Guss gets the question all the time. 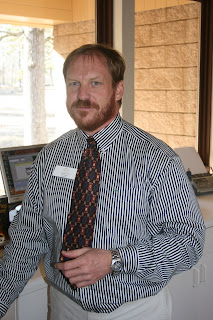 He wants to teach young and old and what life and combat was like for men in both blue and gray. But he tries to avoid heavy politics.

Bennett Place is the site of the largest surrender in the Civil War. Guss, his staff and volunteers are preparing to observe the 145th anniversary on April 17-19.

Guss says he doesn’t want to talk just about how slavery and states rights. He says there were many other factors, just like the many reasons cited today for fighting in Iraq and Afghanistan.

Visitors, he hope, come away for respect for Civil War combatants on both sides -- and how they contributed to society after laying down arms. For example, John Stith Pemberton, the inventor of Coca-Cola, was a Confederate veteran.

“We’re living off what they built,” says Guss.
Posted by Phil Gast at 9:26 PM