The author of “The Confederate General Rides North,” the story of a young girl who imagines herself a star military commander, is a finalist for Georgia Perimeter College’s 2010 Townsend Prize for Fiction. 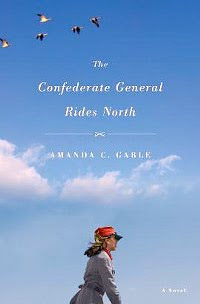 Amanda C. Gable of Marietta, is among 10 Georgia writers who are being judged for the best book of fiction over the past two years. The literary prize, named for Atlanta magazine founder Jim Townsend, will be awarded April 22 at the Margaret Mitchell House in Atlanta. The event is free and open to the public.

Another finalist is Philip Lee Williams of Madison, author of “The Campfire Boys” (Mercer), a novel about camp entertainers during the Civil War. It follows three brothers who are very good entertainers and very bad soldiers. It’s been called an “enchanting read” by Robert Olen Butler, winner of the Pulitzer Prize for Fiction.

“Confederate General” (Scribner) tells the story of Katherine McConnell, 11, who takes a road trip with her moody mother to Civil War battlefields, including Gettysburg and Appomattox, in 1968, when the nation was embroiled in the Vietnam War and the struggle for civil rights.

The book is a coming-of-age novel in which Kat fantasizes leading the life of Robert E. Lee while she comes to grips with her mother’s instability and other family issues.

Jill McCorkle, author of “Carolina Moon” and “Creatures of Habit” writes this about ‘Confederate General”: "… [it] is the compelling story of Kat McConnell, an endearing young heroine who survives life on the road with her mother by retreating into her vast knowledge of Civil War history. She reenacts battles and imagines war-torn landscapes in a way that reflects her own life while also offering escape. ..."
Posted by Phil Gast at 2:17 PM