Rhett Butler and the Atlanta Cyclorama

I saw Rhett Butler today. He didn’t look so good.

He was lying on the ground. His eyes had no focus. Blood covered part of his abdomen. 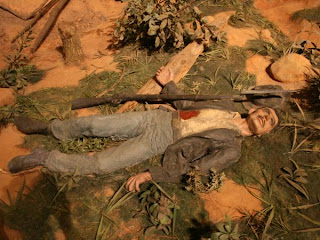 I surveyed the sad scene while visiting the Atlanta Cyclorama. At 42 feet tall and 358 feet in circumference, the cyclorama is said to be the largest in the world. It shows the Battle of Atlanta, at which Confederate forces were repulsed after ferocious fighting during the Atlanta Campaign.

The display includes a diorama with small figures and battle features. The diorama neatly melds into the painting, giving some 3D perspective to the masterful work of art.

How did Rhett get there?

The premiere of “Gone With the Wind” was 70 years ago tonight at Loew’s Grand Theater on Peachtree Street. The city had seen nothing like it. Celebrity appearances and parades marked the three-day event. 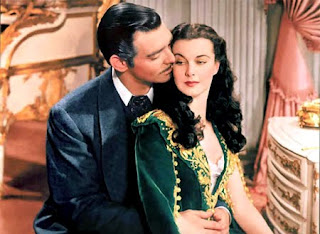 On the morning of Dec. 15, 1939, Mayor William B. Hartsfield escorted Clark Gable, who portrayed Butler, and his actress wife, Carole Lombard, to the cyclorama at Grant Park.

Gable joked that "the only thing missing was a likeness of Rhett Butler."

Hartsfield later had artist Weis Snell make a figure of a dying Union soldier with a face painted to resemble Butler.

A film at the cyclorama describes the fall of Atlanta to Gen. William Sherman in 1864. It reminded me of a line Butler utters to Scarlett O’Hara when portions of the city were in chaos and flames.

“Take a good look my dear. It's an historic moment you can tell your grandchildren about - how you watched the Old South fall one night.”
Posted by Phil Gast at 1:22 PM