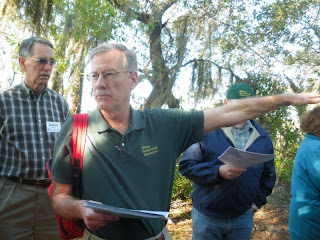 The Georgia Battlefields Association conducted its annual March tour this year in and around Savannah. About 30 people took in well-known forts Pulaski, Jackson and McAllister, as well as lesser-known locations, including Rose Dhu, Shaw’s Dam and the privately-owned site where the Old Augusta Road crosses Ebenezer Creek. The Picket spoke with GBA President Charlie Crawford (above), who guided the group.

Q. What is the purpose of these tours? 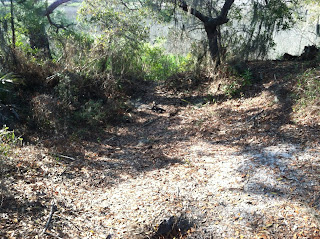 A. They are to raise awareness of sites that can still be preserved if the opportunity arises. We can tell the contextual stories of where they are. Pulaski already is saved. Before then we went to Battery Halleck (above) , which is virtually unprotected. (Halleck was one of the Union batteries that fired upon Fort Pulaski in April 1862). Halleck is grown over but you can still see two big pits where they fired large mortars. I think the county is trying to buy it but they have been unsuccessful in finding who owns the property. There were 11 Federal batteries and that is the only one they could find evidence of.

Q. Could you please tell me about some of the stops? 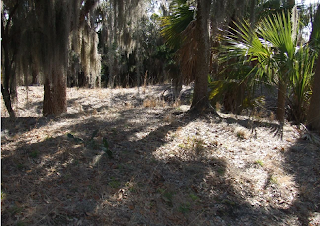 A. We went to Fort Jackson and by Battery Boggs, which is on the golf course. There’s no mistaking it. Obviously it’s been damaged by the golf course but now that it’s there it will be preserved. We also went to Fort Wimberly, a [Confederate] battery that was built to protect the causeway. It was an attempt to protect the internal lines of communication. There is a noticeable and large remnant of the battery. It is on the grounds on Wormsloe state historical site. It could eventually be eroded away because it is right on the water. 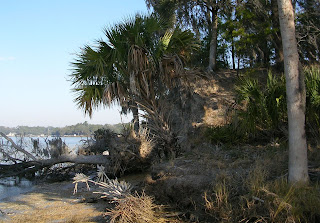 Then we went to Rose Dhu (battery, above). The owner deeded the property to the Girl Scouts long ago. It protected another approach to the city. The mounds are taller than at Wimberly. They are both distinctive. At Rose Dhu and Wimberly you can see in several cases where the gun emplacements were. The trouble with digging pits it doesn’t take very long before you get to water. The Confederates had to build up for protection, as opposed to digging down. (A portion of Rose Dhu is being partially eroded by the river, photo, above).

Q. Was there a first for you on this trip?

A. I had never had been to Rose Dhu before. Rose Dhu is well south of the city [Savannah].

Q. Part of the tour was by water. What sites do you see from there?

A. We took a boat trip to see Gibson’s Point, Turner Rock, Thunderbolt, Bonaventure and Causton’s Bluff to see the sites of the Confederate batteries. Now there is hardly anything to see. Most of them are in people’s back yards. They were put there because once Pulaski fell the Confederates still needed to protect the rivers, including Bull Creek and Wilmington. At Causton’s Bluff there are a couple of mounds that are in a gated community. Fort Bartow on Causton’s Bluff was the largest fort in the area besides Pulaski and it’s almost gone because of the housing. When the housing recovers someone will build the last few. There’s no chance we will have the money to go buy the lots. It’s not a high priority because it wouldn’t be publicly accessible to interpret. 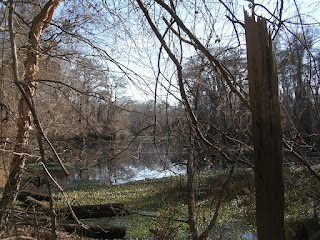 Q. What about the stop at Ebenezer Creek in Effingham County?

A. We were the first tour group to see the site. The Old Augusta Road is now in private hands. Several people wrote about an old road bed. The terrain is much the same as people described it. [On Dec. 9, 1864] the Union 14th Corps was passing through [on the way to Savannah]. The Confederates were annoying and following them. Because the 14th was on a narrow road they were anxious to get across the creek. They made a pontoon bridge, but when they were done they pulled it up. The black people [trailing the Union Army] were left wondering what the hell happened. 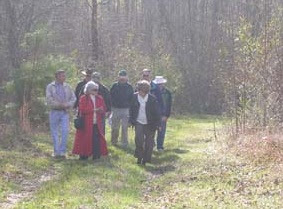 Confederate Gen. Joseph Wheeler talks about picking up 2,000 slaves, but that applies to several days’ worth. About 500 to 600 were left at Ebenezer. Some were picked up and put in the provost, some drowned and others made it across. The Confederate policy is you give them back to their owners. Jefferson Davis, the 14th Corps commander, quite consciously ordered them to pick up the bridge. He didn’t like black people, anyway. He was saying, ‘Why I am I wasting time on these contrabands’? [Editor’s note: The episode caused an outrage in the North and Secretary of War Edwin Stanton met with black leaders in Savannah after the city fell. Four days later, President Lincoln approved Sherman’s Special Field Orders No. 15, confiscating over 400,000 acres of coastal property and redistributing it to former slaves in 40-acre tracts.]

Q. Where else did you go?

A. We followed the route of the 14th Corps to Monteith Swamp. Went past a couple HQ sites. Also to Savannah Christian Preparatory School and saw the earthworks there with historian Barry Sheehy.

Q. What were some of the highlights? 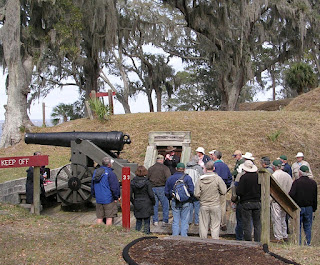 A. Ebenezer Creek was a highlight. Rose Dhu was pretty cool. Hardly anybody had been there before. Savannah Christian School is relatively protected. They use it as a teaching area about the environment. There are wetlands nearby. There is a preservation opportunity nearby. The owner knows there are earthworks on his land but he wants to put in a warehouse, but not directly on them. The land has the continuation of trenches and there is an opportunity to preserve. We went to Battery Jones, which is essentially already lost. [Gen. William] Hardee used defenses in the wetlands. It’s overgrown, has a lot of bugs and poisonous plants. McAllister(photo, above) is protected as a state park. Jackson is a private non-profit. We did a walking tour of downtown, where the slave market used to be. On the western side of the city, there’s an awful lot of it that is already gone. It would be nice to protect what’s left.

Photo credits: Battery Halleck by the Picket; first Rose Dhu photo courtesy of LAMAR Institute; all others courtesy of Georgia Battlefields Association.
Posted by Phil Gast at 9:00 AM