Richmond Hill, Ga. -- With a chorus of "Hip, Hip, Hooray! and the firing of a cannon, Georgia on Saturday officially welcomed home a Civil War battle flag captured nearly 150 years ago. 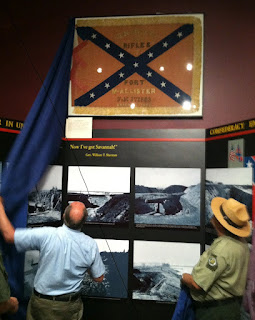 Maj. Clayton kept the banner, one of five seized Dec. 13, 1864, when thousands of troops overran 230 Confederate defenders at Fort McAllister, southwest of Savannah.

"In my house it was a war trophy, a piece of fabric," Bob Clayton told park visitors. "It belonged here, not on my wall."

A general contractor, Clayton last year donated the flag to Georgia, which conserved the silk flag and found a prominent position in the museum. 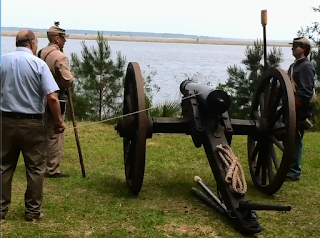 Clayton, 67, was the guest speaker at the unveiling of the Emmett Rifles flag. The Savannah militia unit was one of several that served at McAllister.

The flag was originally presented to the Emmett Rifles by Mary Knox and other women on April 4, 1862.

"Over the years, I would look at the flag and think of the ladies of Savannah stitching the flag," said Clayton, who spoke about 100 yards from the Ogeechee River as pleasure boats sliced the smooth water.

Clayton, speaking outside the museum under Spanish moss and dappled sunlight, carried a small Bible (below) that has a large part in the story of the flag's return. 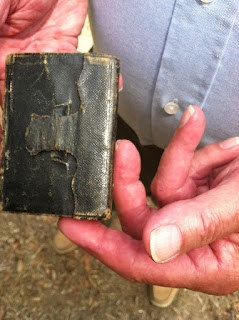 After moving into his father's house about 20 years ago, Clayton and a son looked through cardboard boxes and discovered old letters and flags, including that of the Emmett Rifles.

He displayed the flag, but over the years was mindful of a note that was stored along with it:

“To be return(ed) to Savannah or Atlanta sometime.”

Also among the family possessions was the Bible the elder Clayton's first wife, who died during the Civil War, gave him when he went off to join the 1st Minnesota Light Artillery. Clayton, a native of Maine, had moved to Minnesota by then to farm.

W.Z. Clayton, then a sergeant, lost the Bible on April 6, 1862, at the Battle of Shiloh in Tennessee, where he was wounded in the thigh. He carried the ball the rest of his life. 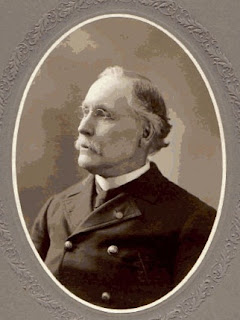 The Bible was recovered by a Rebel, and then recaptured by Union forces two years later near Atlanta. The Bible changed hands a couple more times, and eventually was returned to W.Z. Clayton -- more than 50 years after the end of the war. W.Z. Clayton (right) died in Bangor, Maine, at age 94 in 1929. (The Picket will have a more detailed article on the Bible in the next couple of days)

"I think this kind act led to one good turn deserves another," said Bob Clayton.

The descendant told the audience he believes W.Z. Clayton empathized with the outnumbered men in gray who tried to block Sherman's March to the Sea. W.Z. Clayton was allowed to walk into the fort after it was taken because he was then chief of artillery for the 17th Corps. 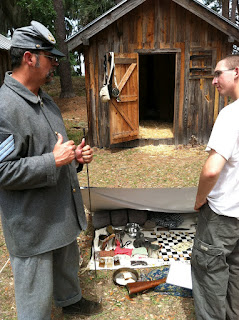 Fort McAllister guarded the back door to Savannah, engaging in duels with Union ironclads sizing up and trying to soften the defenses on the Ogeechee River.

In the end, that tactic didn't work. Like other river forts during the Civil War, McAllister's garrison fell to land troops.

A couple of years ago, the younger Clayton visited Fort McAllister while vacationing in Charleston, S.C.

"What would you think if I said the Emmett Rifles flag is hanging on my living room wall?" Clayton recalls telling Brown.

Brown on Saturday recognized Bob Clayton for the donation.

"In all the time of my career, 34 years, I have never had someone return a battle flag to us," Brown said. 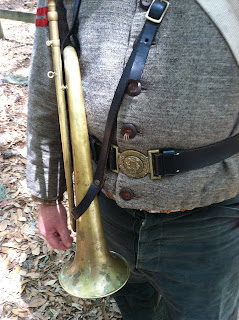 Four other flags were captured by the Federals that day. One of the garrison flags is in the museum. A Clinch Rifles flag is privately held, and a Confederate national flag is at the state Capitol in Atlanta. The identity and whereabouts of the fifth flag is not known.

Saturday's celebration included music, musket and artillery demonstrations and drilling and talks by a few dozen re-enactors and living historians who portrayed the Emmett Rifles. Patrons also took in a screening of a new documentary, "Savannah in the Civil War." (Photo above, bugler Buddy Jowers)