Joe Whitaker sits at a wooden desk in the library of the restored Piedmont Hotel in Gainesville, Ga. 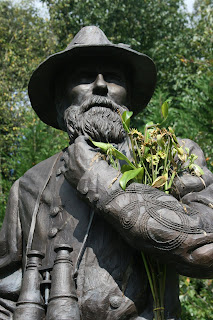 Around him are portraits and books about famed Confederate Gen. James Longstreet, who made this city an hour northeast from Atlanta his home for the last three decades of his life.

It was time to get to the meat of the matter.

Was the Piedmont Hotel, which was owned for many years by the general, in fact the birthplace of Southern (battered) fried chicken?

“I can’t prove that,” chuckles the treasurer of the Gainesville-based Longstreet Society. “But I won’t deny it, either.”

Chickens are big business in Gainesville. So it was no small addition to local lore when the Georgia Poultry Federation a few years back claimed that the Piedmont, built in 1873, was the first area poultry processor, albeit out of a hotel kitchen, in the area. 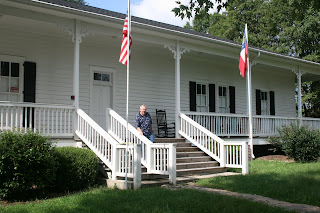 The Piedmont Hotel (left) is the centerpiece of the 200-member Longstreet Society, which was formed in 1994 to honor the life of Longstreet, who died here at age 82 in 1904.

The Longstreet Society also provides info on related sites in Gainesville. Visitors can see them all in about an hour.

When the society acquired the Piedmont Hotel property in 1995, it did not know for sure what it had. A close study of the hallway and other parts of the one-story building confirmed it in fact was a remnant of the imposing Piedmont, which was torn down in 1918.

The ground-floor structure is all that remains of the three-story, double-winged Piedmont. Since 1918, the remaining building saw life as a military school, apartment duplex and, possibly, a brothel.

It almost had a date with a bulldozer.

“It scared me what we had almost done,” says Longstreet Society President Richard Pilcher. 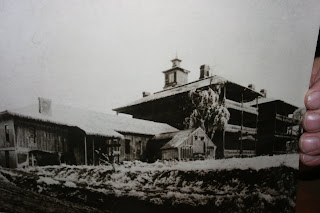 Since then, the society has treated the building with love, spending about $250,000 to restore it and make it a center for learning. More improvements are planned.

Longstreet, who was controversial in the South for becoming a Republican and backing Reconstruction, moved to Gainesville from New Orleans about six years after the end of the Civil War.

The lieutenant general, dubbed the "Old War Horse," was one of Gen. Robert E. Lee's chief lieutenants during the Civil War, achieving distinction in many battles, including a monumental attack at the Battle of Chickamauga. The Longsteet Society and others defend him against critics who say he was responsible for the Southern loss at Gettysburg.

Members also said he was a pragmatic, if somewhat naive, man who wanted to see the country come together after hostilities. Longstreet supported civil rights for former slaves.

The general in later years looked a far cry from his Civil War days. Instead of a general’s uniform and brown beard, he was white-headed and sported muttonchop whiskers. He was a genial hotel host who preached reconciliation and an end to war. 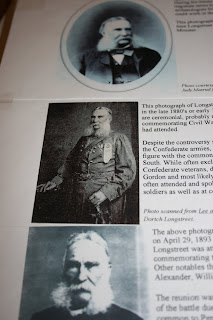 The society uses the old hotel rooms to tell his story. One has artifacts and paintings. Another has period furniture from the time of Woodrow and Ellen Wilson, whose daughter Jesse was born in the hotel in 1887. The main hallway has copies of documents on his appointment to federal offices, including postmaster, U.S. marshal and minister to Turkey.

From its beginning, Whitaker says, the Piedmont was “a railroad hotel” and a popular summer resort for Atlantans and others passing through.

The current Piedmont Hotel, which also hosts civic meetings and church services, sits only a few blocks from the railroad in an old part of Gainesville that had declined before some recent redevelopment.

“It [the neighborhood] was a whole lot worse,” said Whitaker, “but is getting better.”

Park Hill home place: A statue of Longstreet looks down upon motorists on Longstreet Circle off of Green Street. The general pruned muscadine vines on this 65-acre farm which featured an old Colonial-style home. The home burned in 1889, and the general’s wife, Maria Louise, died a few months later. The bronze statue was erected by the United Daughters of the Confederacy. Sadly, many of Longstreet’s wartime memorabilia, including his uniforms, were lost in the fire.
(959 Longstreet Circle). 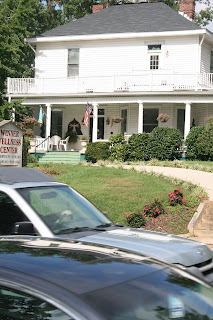 Helen Longstreet Home: Longstreet was 76 and a widower when he married 34-year-old Helen Dortch. He was living here at the time of his death. The house, which in recent years was expanded to two floors, is operated now by Winters Chiropractic. Helen Dortch Longstreet lived a long life. The spry environmental activist even served as a riveter at the Bell Bomber plant in Marietta during World War II. Dortch led the uinsuccessful fight to stop the damming of the Tallulah River to form what are now known as the Georgia Power lakes. She had to sell the house to pay legal fees.
(746 Green St., across from First Baptist).

Whelchel House: Longstreet was visiting his daughter when he became ill and died. During a coughing spasm, his old wound from the 1864 Battle of the Wilderness reopened, and he bled to death. His last words were, “Helen, we shall be happier in this post.”
(House is gone. Businesses are now at corner of College Avenue and Bradford Street). 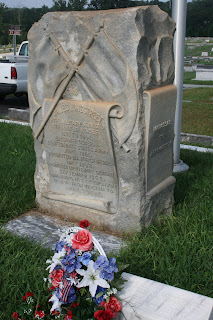 Alta Vista Cemetery: Two Georgia governors are buried not far from several members of the Longstreet family. Longstreet’s remarkable grave marker is made of granite and cites his Civil War and Mexican War exploits. Some 5,000 people attended his Catholic services in town and streamed to the cemetery. An aged veteran placed his gray jacket on the casket. Helen Dortch Longstreet erected the marker several decades after Longstreet’s 1904 death. Interestingly, a U.S., rather, than Confederate, flag flies over the plot. And to reflect the family’s belief in reconciliation, the American flag is crossed over the Confederate battle flag on the marker.
(1080 Jewell Parkway. Go to flagpole at the center of the cemetery.)

Next week in Part Two: The legacy and controversy surrounding Longstreet, who was villainized by some vocal Southerners.

More information on the Longstreet Society
Posted by Phil Gast at 2:04 PM