A team approach preserves Virginia Civil War redoubt at George Mason University, which is nestled in suburban sprawl. Here's how they did it

An earthen fortification that survived urban sprawl has been preserved in a corner of George Mason University in Northern Virginia, a success story brought about by a six-year-old partnership between a Civil War round table and the school.

An Oct. 7 dedication ceremony for the redoubt, built by Confederate forces near Fairfax in 1861, celebrated the effort to protect and interpret the site. The fortification, about 80 feet in diameter, did not see action during the war, but was an important early-warning outpost for both Rebels and Yanks who occupied the site.

Efforts to save the site in the early 1990s and early 2000s went nowhere. Concerned by its condition, the Bull Run Civil War Round Table (BRCWRT) approached history department leaders in late 2015 and early 2016.

The conversation began and students in a Civil War and Reconstruction class at George Mason have since visited the site – which is near a campus parking lot -- with round table members as guides.

In 2019, the campus grounds department removed four large trees that threatened the redoubt’s structural integrity and cleared the site and its surrounding area of vegetative undergrowth and tree saplings.

The redoubt became completely visible for the first time in more than 75 years.

Groundskeepers have since cleared routes for access trails and installed two interpretive markers created by the George Mason-BRCWRT team.

“Education and preservation are the core missions of the Bull Run Civil War Round Table -- and central to our purpose -- to learn about and to learn from  America’s Civil War history,” Blake Myers, preservation chair with the BRCWRT, said at the event. “The preservation and interpretation of this site is a great example of those two missions in action.”

The redoubt was constructed by Col. Robert Rodes’ 5th Alabama Infantry, Ewell's brigade, in June 1861. It was built on high ground along two well-traveled thoroughfares – the current Braddock Road and Route 123 (Ox Road).

It’s difficult to know how many men were deployed at the redoubt at any given time. It was used as an observation post and a command post for the units/soldiers manning picket posts along the trench lines to the east or west (depending on which side was controlling this part of Virginia) of the redoubt.


The redoubt at Farr’s Cross Roads was among several fortifications built to monitor and discourage Federal troops from marching from Washington and Alexandria, Va., toward Manassas Junction.

Dust kicked up by Federal troops in July 1861 signaled a Federal advance. When Confederate forces withdrew to their main defensive line along the Bull Run on July 17, the site was occupied by Union forces under the command of Brig. Gen. Irvin McDowell, according to the round table. The Battle of Manassas (Bull Run), the first major land battle of the conflict, occurred just days later.

The hastily constructed fort exchanged hands during the war, but was held mostly by Union troops, including the 16th New York, 1st New Jersey and 2nd Massachusetts infantry. While it once had a parapet up to 6 feet high, most of the ring currently is half that height.

Significant commercial and residential development in suburban Washington has erased most of the earthen structures erected by both sides, so it is somewhat of a minor miracle that the redoubt survives, given it being bounded on all sides by asphalt and buildings. 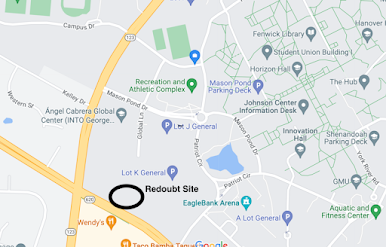 A BRCWRT article a few years ago detailed the project and partnership with George Mason.

“While construction of the Mason Inn and parking lot and the enlargement of student parking lot K has reduced the overall size of the site and potentially obliterated some of the earthworks, the redoubt still remains and is in remarkably good condition.”

Myers told the Civil War Picket in an email that a 50-foot section of a trench line presumably built by Union troops survives west of campus along Braddock Road.

Among university officials who worked with the BRCWRT to preserve the site was history professor Brian Platt, who brought the redoubt’s attention to the administration. In prepared remarks at the ceremony, he used the term “Fairfaxed” to describe rampant development in the area.

“My first thought, at the time, was how lucky we were that this site was here on the campus, and not on private land, or in a real estate developer’s viewfinder,” Platt said.

“After all, if a preservation project were to happen anywhere in a highly developed suburban landscape – if a site were to avoid getting ‘Fairfaxed’ – surely it would happen at a university -- a place with a scholarly interest in studying and preserving our historic and cultural heritage.”

Fairfax County was home to numerous Civil War fortifications and features, a legacy reinforced by the discovery of a cedar-logged highway near George Mason in 2014. The so-called “corduroy road” is believed to date back to the Civil War.

The round table commissioned a drawing by GMU alumnus Nathan Loda of the area as it may have appeared in 1861.

“The sketch depicts our informed view of what the redoubt, the cross roads and the Farr property may have looked like in June 1861,” Myers said. “We have yet to find any period photographs or sketches of the redoubt or the area....what we know about the redoubt has been gleaned from unit histories, the Official Records, soldier letters, etc.”

Myers told the audience on Oct. 7 that it was a day to savor what has been collectively accomplished, but more work likes ahead.