Mathew Brady's photographs captured the reality of the Civil War. A new gravesite memorial celebrates the diversity of his subjects

Photo historian Larry West spearheaded the effort to honor Brady, who died destitute in 1896 and was buried in Congressional Cemetery. The photographer is remembered for his depictions of famous and everyday Americans, and battlefield scenes that brought the horrors of war to American's doorsteps.

A dedication on Sept. 17 showcased life-size bronze statues of President Abraham Lincoln and civil rights figure Frederick Douglass – among famous Americans photographed by Brady -- a portrait on stone of Brady, a reproduction metal camera and 85 fired porcelains of images, most by the photographer and his associates.

“The memorial features Mathew, recognizing him as the entrepreneur, innovator, team leader and posing artist that he was,” West wrote the Picket in an email this week.

While it does not include his famous scenes from the Antietam and Gettysburg battlefields and those of campsites, many of the porcelains depict people who were wartime figures.

Historians this year are marking Brady’s 200th birthday, emphasizing his importance to the field of photojournalism.

“Brady’s photographs of Gettysburg caused a sensation when viewed by members of the public,” says Congressional Cemetery. “Americans were little used to scenes of war that before had only existed in imagination.

“The prior year, in 1862, Brady had shocked the public when he exhibited photographs of dead enemy soldiers, captured by associates Alexander Gardner and James M. Gibson, from the Battle of Antietam.”

Brady’s team took more than 10,000 photographs by war’s end. He had spent some $100,000 but the federal government initially declined to buy them. Brady declared bankruptcy and struggled financially for the rest of his life.

Eventually, the government purchased Brady's photographs for $25,000, providing him some financial relief. Fortunately, most are available on the Library of Congress website.

Upon his passing in 1896, veterans of the 7th New York Infantry helped finance Brady's funeral and interment at Congressional Cemetery.

"His photographs, and those he commissioned, had a tremendous impact on society at the time of the war, and continue to do so today," says the American Battlefield Trust.

West, a board member of Congressional Cemetery, designed and provided primary financial backing for the memorial. 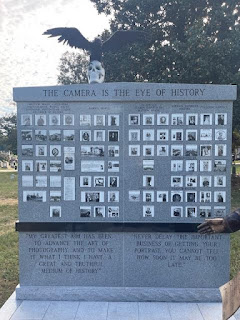 “Celebrating Brady's outstanding artistic achievements, the memorial reflects the diversity of his subjects and the Washington, D.C. community,” a Facebook post says.

It is the final resting place for about 600 Union service members and 100 Confederates.

“Generals lie next to privates, and brothers who fought on opposite sides rest only a few feet apart.”