Updated Sept. 26
Clearly, someone wanted this man to be remembered. His photograph, set in a small wooden case and protected by facing burgundy-colored cloth, was among items included in a time capsule placed at the base of a Confederate monument in Macon, Ga.

He likely was a Civil War veteran, given the monument was topped by a marble Confederate soldier holding a rifle, and he appears to wear a uniform. Are the crutches he holds the result of a battle injury or did the need to use them rise after war’s end and before the time capsule was created in 1878?

Officials with Macon’s Cannonball House recently opened two time capsules associated with the monument, one of two monuments relocated over the summer amid the national reckoning over Confederate memorials and after years of legal wrangling.

The house expects to exhibit some of the time capsule contents when it reopens Oct. 3 following a renovation of a few rooms, including its museum. Officials had hoped for a Sept. 26 reopening but there were unforeseen delays in one room.

Executive Director Cheryl Aultman tells the Picket that she hopes to eventually learn the man’s identity.

“I'm going to ask an expert in the field to get some pointers on where to go from here to try and identify him,” she wrote in an email. “I know a little about the (donor) family and I feel there must be some connection.”

Bibb County supplied numerous regiments to the Confederacy and, according to Aultman, it was the largest hospital center outside Richmond, Va., with 15 identified locations. There were several daguerreotype artists in Macon at that time, as well, she said 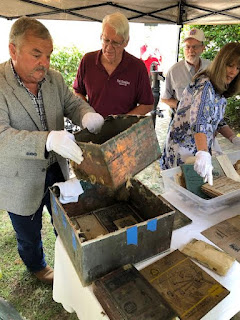 An inventory of the 1878 time capsule lists H.C. Tindall of Macon as the donor of the photograph and a miniature Confederate flag worn by a soldier. Another source gives his name as M.C. Tillman. A Cannonball House list of time capsule donors says Harry C. Tindall was a bookkeeper who died in 1929 and is buried in Atlanta. He would have been too young to fight in the Civil War.

“The contents of one box, put inside the monument’s base … were actually in better shape than a capsule placed near the monument’s cornerstone when it was relocated to Second Street and Cotton Avenue in 1956,” the Historic Macon Foundation said in a social media post. “Several of the items were damaged by moisture that had seeped in over the years.”

The laying of the cornerstone in 1878, a year before the monument was dedicated, drew thousands of spectators. A procession included several former Rebel officers who had lost an arm during the Civil War. Among the speakers was Gov. Alfred H. Colquitt, a Confederate brigadier general who advocated states’ rights. He opposed Reconstruction following the war. 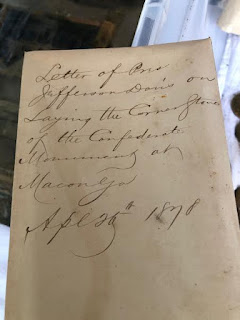 The 1878 donations were largely focused on the military and most donors served with the Confederacy.

Monuments across the South following the Civil War perpetuated the Lost Cause narrative, which asserts states’ rights, rather than the preservation of slavery, was the South’s chief cause. Most historians have challenged that view.

The items included numerous regimental rolls and listings of those who died, newspapers, dozens of coins, a ballad about Gen. Robert E. Lee, a letter from Jefferson Davis (right) about the laying of the cornerstone, war bonds, Confederate money and a map taken from the body of Capt. J.G. Rogers of the 12th Georgia after he was killed at Antietam in September 1862.

The second time capsule was placed in the monument when it was moved in 1956 from Mulberry Street to Cotton Avenue. Among its items is a copy of “Gone With the Wind” by Margaret Mitchell, yearbooks for two chapters of the United Daughters of the Confederacy, a Stone Mountain half dollar coin dated 1925 and a July 1866 letter to Lee confirming upon him the honorary degree of doctor of laws, and a copy of a letter in which he replied.

“There are a few more items that are too wet to open yet,” Aultman wrote last week. “We are attempting to dehumidify them and are hopeful we might yet save them. The large 1956 metal box had taken on moisture over the years damaging many of the items enclosed."

The Cannonball House, built in 1853 and named for damage it sustained during Federal cannon firing in July 1864, will display items with interpretive signage.

The house is “deeply honored to be chosen as the repository of these historic relics and are looking forward to sharing them with visitors,” Aultman said.

“Our docents are knowledgeable and love sharing the history of the Cannonball House, its inhabitants, and the history of many in the central Georgia area.”

The monument of the soldier is now in a small park outside Rose Hill Cemetery, where numerous Confederates are buried. Opponents of the move cited state law restricting movement of such monuments while others said the marble represented a bygone era and needed to leave its prominent spot downtown. Current plans are for the intersection to become a community green space.

The Cannonball House, which has Civil War and other collections, is open from 10 a.m. to 3:30 p.m. Monday through Saturday. Forty-five minute tours include the main residence and the original two-story brick kitchen and servants’ quarters. 856 Mulberry St., Macon, Ga.