Back on display in N.C.: Blockade runner dioramas are rich with riveting detail

Endearingly old school, four dioramas depicting scenes from Civil War blockade running – a cargo auction, a daring Union raid, the boarding of a vessel and the drowning of a Confederate spy – are on display for the first time in nearly 35 years.

The museum-quality exhibits are back home in Carolina Beach, N.C., at the Town Hall. That building is on the site of the Blockade Runner Museum, where the meticulously detailed dioramas first enthralled visitors.

The museum operated from 1967 until the early 1980s. The Cape Fear Museum up the road in Wilmington acquired the exhibits and put them in long-term storage. Pressed for space, the Cape Fear Museum last year asked Fort Fisher Historic Site to take them. It, too, lacked adequate display space for the dioramas.

That’s when the nonprofit Friends of Fort Fisher stepped in.

“It was something we felt the public needed to see,” Friends executive director and CEO Paul Laird told the Picket.  “It dawned on us to talk to the Carolina Beach Town Council.” The dioramas went on display last month in the atrium.

Daring Confederate blockade runners usually made it through Union naval ships meant to prevent them from bringing vital war goods to Southern ports. 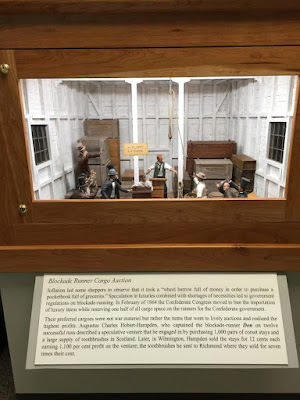 Laird knew Foard and recalls the museum being open when he was a college student.

“I would listen to him tell stories. It had a personal connection to me.” The museum featured other items and paintings that focused on Wilmington’s vital role in blockade running. Fort Fisher (south of Carolina Beach) was a key to the Cape Fear River defensive system and the port. It fell to Federal forces in 1865.

Forrest’s dioramas capture emotions and movement in the scenes from blockade running. The four at the Town Hall show: 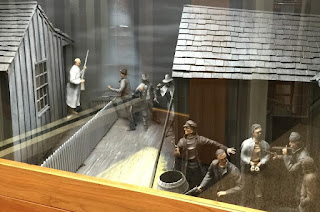 -- U.S. Navy Lt. William Cushing’s raid on Confederate brigade headquarters at Smithville (Southport) in February 1864. Cushing hoped to capture Brig. Gen. Louis Hebert, but bagged another officer instead after learning the general was not at home. The raiders made off with papers and got back on the USS Monticello before their trespass was discovered. 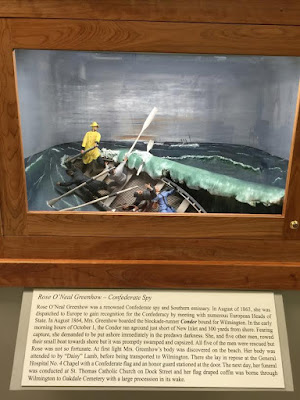 -- Renowned Rebel spy Rose O’Neal Greenhow was on a North Carolina-bound blockade runner that ran aground on Oct. 1, 1864. Fearing capture, Greenhow and five men rowed a small boat toward shore at New Inlet at the mouth of the Cape Fear River. The craft swamped and capsized, with the spy being the only occupant to die. Her body was found on the beach the next day and Greenhow was honored with a military funeral in Wilmington. 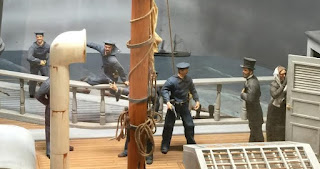 -- A generic scene of a Federal boarding party coming on to the deck of a blockade runner. Capture of such vessels proved to be an incentive through prize money. One admiral is believed to have earned more than $125,000 during the war. 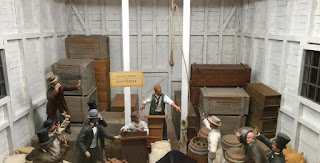 -- A lively auction of scarce items brought by a blockade runner. The Confederate government eventually moved to ban the importation of luxury items and have captains instead concentrate on bringing materiel important to the war effort. The move was only partially successful. Blockade runners, offsetting the risks of business, insisted on high profits. “Anything from hat pins, to cloth, fabrics, shoes and kitchen ware,” said Laird. “Any kind of farm implements, tools. Medicine was always at a premium.” Toothbrushes were especially in demand.

The dioramas were built into the walls of the Blockade Runner Museum. Prerecorded audio messages ran on a loop.

The Cape Fear Museum covered the diorama insets with protective material during their decades in storage. Two other exhibits from the now-closed museum – including a large depiction of the Battle of Fort Fisher – did go on display at the Cape Fear Museum.


“Everything was in very good shape,” Laird said of the models back on display in Carolina Beach. “There was some minor cracking on some of the plaster parts that simulated the sea. All the figurines were in good shape. There was some minor touch-up work. Overall, they were in excellent condition.”

Sheila Nicholson, administrative assistant to the town manager, said visitors often stop by to see the dioramas, which include informational placards. “They sometimes ask about where they came from or who made them.”
Posted by Phil Gast at 12:58 PM