A park containing entrenchments built by the Georgia Militia during the Civil War will be formally dedicated Friday afternoon (June 21), making it the first of two historic sites opening this year ahead of the 150th anniversary of the Battle of Resaca during the Atlanta Campaign. 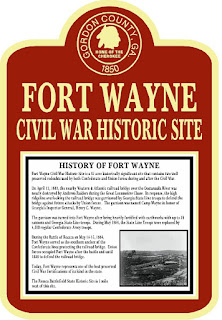 Construction of the larger Resaca Battlefield State Historic Site, about a mile west near Interstate 75, is tentatively scheduled for completion in mid-August, subject to weather and other factors.

Both will be maintained by Gordon County, which has worked for years with the Friends of Resaca Battlefield to see the historic sites become reality, with the hope of bringing more visitors and their dollars to the area.

Near both parks is Resaca Confederate Cemetery, which contains more than 400 graves.

The county-owned Fort Wayne Civil War Historic Site on Taylor Ridge Road will have a paved pedestrian walking trail over its 65 acres. Visitors will be able to traverse a boardwalk over one of two areas containing entrenchments.

While the site is considered to be one of the best preserved of its kind in the state, Dowling acknowledges it may  take a discerning eye to pick up all the features in the terrain. The Federal redoubt, for example, was 5 feet taller 100 years ago.

Still, Fort Wayne is rich in history and strategic value to both sides during the Civil War.

The fort was built in 1862-1863 by the Confederate militia to protect the railroad and road bridges over the Oostanaula River, according to Charlie Crawford, head of the Georgia Battlefields Association.

For much of the war, Fort Wayne was used as a staging area for Confederate reinforcements that were being sent north by rail transport.

Confederate artillery in the fort fired the first round toward Federals advancing on Resaca, which lies between Chattanooga, Tenn., and Atlanta.

The Federals occupied the fort after the May 1864 battle, again to protect the railroad bridge. They constructed a larger fortification.

In October 1864, after the fall of Atlanta, Confederate Gen. John B. Hood attacked the rail line through northwest Georgia in an effort to cut Sherman’s supplies and cause a Federal withdrawal, Crawford told the Picket.

Hood sent a “no quarter” surrender demand to the Union garrison under Col. Clark Wever.

Wever pulled his 1,200 troops into two forts (Fort Wayne being one of them) and responded to Hood’s surrender demand with a memorable line: 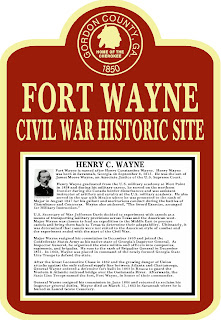 “In my opinion I can hold this post. If you want it, come and take it.”

The Confederates shelled the forts, but being informed that Federal reinforcements were on the way, withdrew, said Crawford.

Fort Wayne’s original parade ground and entrenchments are still in place, the county said. Plans for silhouette figures of soldiers on the site were dropped for funding reasons, Dowling told the Picket.

The site’s signs will include a history of the fort and of its namesake, Confederate Gen. Henry C. Wayne.

While Wayne organized and led the militia in Georgia, he probably is best known for an interesting footnote in U.S. military history.

Before the Civil War, then U.S. Secretary of War Jefferson Davis ordered Wayne to the Middle East to procure camels to transport military supplies in the West.

Wayne purchased nearly three dozen. The camel corps was tried out in Camp Verde, Texas. Ultimately, the experiment ended at the start of the Civil War when officials determined the beasts were not suitable for combat in the United States.

Two Gordon County employees will patrol and maintain the county and state sites. They’ll be in charge of security, mowing and cleaning of restrooms at the state site.

Resaca Battlefield State Historic Site will be located just west of Exit 320 on Interstate 75, which divides the battlefield. A planned visitor center and museum did not come about because of a funding shortfall.

Visitors will take a nearly two-mile long road into the battlefield, and see observation points along the way and one at the end, said Sally Winchester, marketing and communications manager for Georgia State Parks & Historic Sites.

“These locations will be fitted with interpretive signage,” said Winchester. “There are about five miles in walking trails that also will have some interpretive signage. At the end of the road, roughly in the middle of the site, will be a covered observation platform that contains public restrooms.” 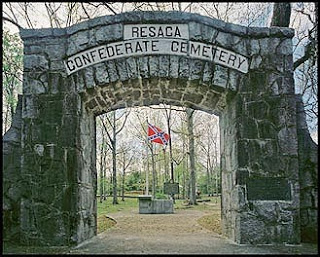 In March 2012, the Civil War Trust closed on the purchase of 51 acres of another portion of the Resaca battlefield, about three miles northeast of the state park site. The Georgia Battlefields Association has financially supported a conservation easement on 473 acres of land at Resaca.
Posted by Phil Gast at 11:36 AM