The building that houses the Atlanta Cyclorama has gotten some TLC the past several months as crews overhauled the heating and air system, gave the front of the building a facelift and repaired and repainted other features.

“We are trying to do a lot of things all at once,” says spokesman Yakingma Robinson.

The building in Grant Park is closed from Tuesday-Thursday this week as sheet rock is replaced in some areas of the museum and a new elevator lift is installed to the viewing area of the largest painting in the nation, depicting the 1864 Battle of Atlanta, one of several Union victories in the region.

“The building is in pretty good shape,” says Robinson, who also serves as marketing manager.

He says the same of the venue’s star attraction, the giant work of art – which covers 15,030 square feet and is 42 feet tall and 358 feet in circumference.

But Robinson acknowledges the painting, which has some ripples, needs a more state-of-the-art means of attachment to the walls of the building, which opened in 1921.

Also in need of modernization are the painting’s narration and sound system and the museum exhibits.

The Picket spoke Tuesday with Robinson about several aspects of the site, which is open Tuesdays-Saturdays. He would like to see Sunday one day restored to the schedule.

“There is a misconception of the work that needs to be done to the painting,” says Robinson.

The surface itself, with the exception of what he calls minor problems, is in decent shape.

The mural, painted in 1885-86, needs what its counterpart at Gettysburg National Military Park got five years ago: A new backing and a system for stretching the fabric, properly balancing its weight.

“That is something we are going to address real soon,” says Robinson. “The way the painting is hanging.”

“They (observers) think it is balling up or something. But it drapes like a curtain since it has been here,” says Robinson, adding the 10,000-pound art work is not level all the way around.

The city has no current price tag, funding or definitive schedule for the work. Officials thought they had someone who might be able to do the work, but it did not work out, says Robinson.

Three levels of lights illuminate the painting, ideally working together to make a dramatic presentation.

The bottom level was replaced about a year ago.

“We were gunning to get new lighting fixtures that would produce the same viewing quality people have experienced and for them to be energy inefficient,” says Robinson.

Officials got the energy savings, but the harsh glare from the new lights has not been compatible with the other lights, creating the illusion of blemishes and shadows.

“The lights at the bottom are overpowering the lights they are supposed to work with,” he says.

The city is currently taking proposals to address the problem.

GETTING WITH THE TIMES

The movie and audio/visual program that goes along with the painting “may be a bit dated,” acknowledges Robinson.

“It definitely would give us an edge,” says Robinson, whose principal dream for the venue is more exposure.

The city must balance its approach to the Cyclorama between those who like it the way it is and those calling for innovative means of telling the story of Atlanta and the Civil War.

“We could use some updating to the museum and things of that nature to really start to draw more of the 25 to 40 crowd.” The Cyclorama currently caters principally to seniors, school children and out of towners.

The Cyclorama’s offerings include a summer lecture series. Despite the construction work, a talk scheduled this Thursday by former state labor commissioner and author Michael Thurmond is on for 6 p.m. in the auditorium.

The venue is in the early stages of planning for the 150th anniversary of the crucial Atlanta Campaign by Union Gen. William T. Sherman.

One possibility is a re-enactment, a favorite request among patrons.

The Cyclorama would have to overcome ordinances and possible negative impact on its next-door neighbor, the Atlanta Zoo, where creatures may not enjoy the sounds of cannon or gunfire, says Robinson. 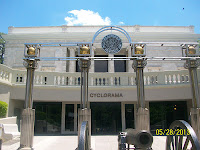 The Atlanta Cyclorama and Civil War Museum’s attendance is about 70,000, about half its number 15 years ago. It has seen a bump of about 3,000 to 5,000 in the past few years, according to Robinson.

In 2011, Kevin Riley, editor of The Atlanta Journal-Constitution, wrote about his visit to the center: “The Cyclorama looks tired — from the seating, to the diorama, to the painting itself."

With concerns about attendance, funding and the condition of the painting and exhibits, Atlanta Mayor Kasim Reed in 2011 assembled a task force to study solutions.


Several options are on the table -- including new revenue models, an estimated $10 million restoration or a more high-profile location.

The task force has not issued a recommendation. 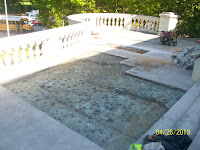 Staff members at the Cyclorama, who have heard such discussions in the past, are heartened the city is making the infrastructure improvements as it considers its options.

Recent upgrades include new thermostats and gutters, repaired window sills and the resurfacing and repainting of the building’s signature terrace.

“The past seven or eight months have shown there is interest in making sure we are operating in the best capacity while here,” says Robinson.
Posted by Phil Gast at 8:24 PM