What to do with these backyard finds?

Donate them to a museum, ask for big bucks, call the bomb disposal squad or put them on the mantle once you know they are safe.

Those are the options that have been facing radio personality Jenn Hobby of "The Bert Show" on Q100 in Atlanta. 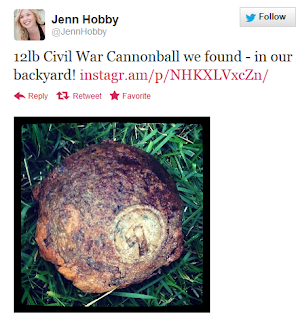 Hobby and her husband, Grant, came across three Civil War 12-pound cannonballs when they moved into their Atlanta home. Landscapers hired by the previous owner apparently uncovered them while planting trees.

"We started looking at them and thought these could be artifacts," Hobby said on the show Thursday. An acquaintance told them they were likely Civil War artillery rounds. Hobby said they moved the rounds and tried to wash them off with a hose.

Gordon Jones, senior military historian and curator at the Atlanta History Center, weighed in Thursday, saying the shells were typically used by the Union Army, which fired 100,000 rounds in one month alone during the Atlanta Campaign in 1864.

"You don't have anything to worry about," said Jones. "They are not going to go off." 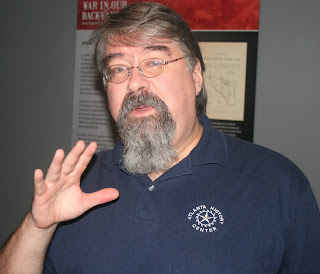 The cannonballs are encrusted with corrosion. The timed fuse, made of lead and tin, is now plugged up and incapable of being ignited after so much time in the ground, Jones (right) said.

Hobby's Facebook page has featured posts from readers telling her to sell them on eBay or to an antiques shop. Others have urged caution in handling the artifacts.

"The only way this thing would go off if you would put it in a fire or try to grill it with your hamburgers or something like that," said Jones, who cited scary examples of people trying to burn the rust off.

Besides reburying them, the couple could call police, who are mandated to have them destroyed.

Collectors using the proper equipment can safely disarm and clean the cannonballs, Jones said. "You probably just have a nice souvenir to put on the mantle piece."

Hobby told listeners she would have the rounds disarmed before she would put them in her house.

Jones indicated there could be more shells in the yard if they were part of a larger cache.

"We get these calls maybe two or three times a year," he said. "Sometimes we can figure out which battle it was in. Sometimes we can't. There was so many of these things around."
Posted by Phil Gast at 9:38 AM