The 8th Regiment Band of Rome, Ga., performed on July 21 during the annual B*ATL weekend, marking the 148th anniversary of the Battle of Atlanta.

Band leader John Carruth said the band has about 25 performances a year, presenting itself as a Union, Confederate or town band. Saturday, members were dressed as both Confederate and Union musicians. 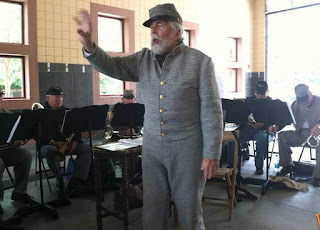 The band has cornets, tenor horns and alto horns, but no trumpets or trombones.

"They have a very mellow tone compared to modern brass," said Carruth. Civil War instruments also had a higher pitch.

The band, started 26 years ago, has about 30 original instruments, but they are known to "break regularly," he said. Bands in both the Federal and Confederate armies largely played similar tunes.

"The music is cheaper to find than the horns," said Carruth.
Posted by Phil Gast at 1:40 AM