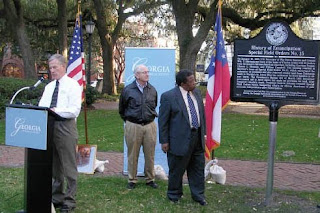 "Charlie Crawford is an indispensible source of information on all aspects of the preservation movement in the state," the trust said of the honor.

The GBA has assisted in the research and writing of historical markers, including one unveiled in downtown Savannah after the awards ceremony.

On January 12, Sherman met with 20 black leaders of the Savannah community, mostly Baptist and Methodist ministers, to discuss the question of emancipation, according to the New Georgia Encyclopedia.

The meeting helped convince him many of the slaves could operate their own farms, says Crawford.

"Sherman had an immensely practical orientation," Crawford added. "He knew very well that his orders would be effective only until the president and Congress addressed the issue, but he was unwilling to leave all these people unable to provide for themselves. As the last sentence of the marker explains, President Johnson rescinded the orders a few months later."