Of rocket launchers and engineers

The scene reminded me of the time I wore cutoffs and a Hawaiian shirt to a debutante party.

She, too, seemed out of place, an attention-getter standing among old-style canvas tents, wooden crates and folding chairs. 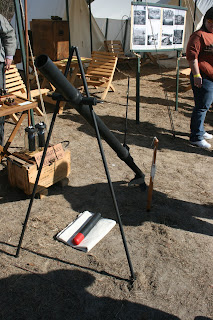 Visitors to the recent Battle of Aiken (S.C.) re-enactment milled around a replica of the Hale Rocket Launcher, which I would have guess had been built a little before World War II.

Instead, the launcher, which resembles a mortar, had been developed around the time of the Mexican-American War by British engineer William Hale.

Two soldiers could tote the beast. It was even more mobile if hitched to a couple of mules. It saw some action during the Civil War, doing a great job of disturbing the peace.

“This would scare horses,” said Ray Sheen, a captain in the Co. B 3rd Regiment Confederate Engineers re-enacting group. “It made all kinds of noise and smoke. It would have quite an effect.”

Sheen, of Greenville, S.C., and other 3rd Regiment members provided fascinating living history displays of the engineers’ contribution to the war effort.

When they think about the Civil War, most people conjure images of gray- and blue-clad warriors locked in battle. 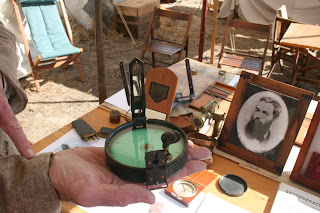 But it was the engineer who improved roads, built bridges and made maps that got troops to the battlefield. He set up telegraph lines, designed and built fortifications and used signal flags. And he might even use a barometer to figure the grade of a road and whether the elevation rise was too much for an Army wagon.

In a word, the engineer was indispensable.

Evan Castle of Between, Ga., showed a collection of sextants, compasses and surveying equipment used by mapmakers.

The group pays homage to Jedediah Hotchkiss, a cartographer who made maps used during the Civil War. His detailed maps of the Shenandoah Valley are credited by many as a principal factor in Confederate Gen. Stonewall Jackson's victories in the Valley Campaign of 1862.

Castle, a surveyor in his own right, talked about the “amazing accuracy” of many of the old maps. 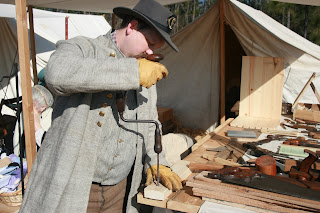 A couple tents down, Dave Young (left) and Walt Sommer of Acworth, Ga., demonstrated the use of old woodworking and carpentry tools.

The jack planes, drills and saws still do precise work.

Company B, also known as Pharr's Company, was commanded by Capt. H. N. Pharr, and was organized on Aug. 1, 1863. The re-enactment displays many of Pharr’s personal items and tools.

• Read more about the re-enactment group
Posted by Phil Gast at 8:34 AM