Art of the deal at Civil War shows

Come with cash -- and an iPhone.

It’s not unusual for these days for visitors to Civil War shows to look up prices and check a firearm’s serial numbers on the Internet before plunking down serious money for a prized item.

And then the dickering begins. 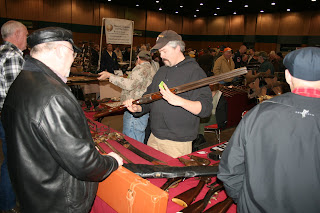 I attended the Chickamauga Civil War Show in Dalton, Ga., earlier this month and spent a few hours talking with dealers and buyers on the sprawling trade center floor.

You don’t see many guns snapped up by re-enactors. Most are not meant to be fired and are destined for a spot over the fireplace or in a display case.

Clapp says it takes good people skills and knowledge to be in the collectibles business.

A customer approached Clapp while we spoke, asking whether the seller might make a trade for two pocket pistols, including an 1849 Colt.

“For some, history of the pieces are important. For some not,” says Clapp, who says he always asks a customer to name a price before the haggling begins.

Like “Antiques Roadshow” on PBS, many patrons are there just to see what something they have is worth. 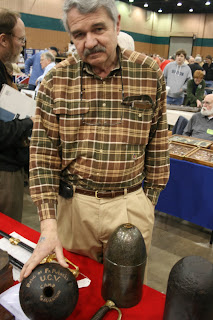 Clark Crawford of Ooltewah, Tenn., brought a bayonet and sheath that he got from his father-in-law. The good news: the bayonet was authentic Union. The bad news: the sheath was British.

“I had hoped they were a match,” said Crawford.

Still, the pair were worth about $200. Crawford went home with the keepsake. “I would rather pass it on to my son than sell it.”

John Dietrichs (photo above) of Dunwoody, Ga., was the proud new owner of a $310 8” artillery round used at Fort Pulaski, Ga.

The Dalton show is considered mid-level by collectors and sellers. Another in Franklin, Tenn., tends to have higher-priced items.

John J. Hayes of Gettysburg, Pa., says serious collectors look quickly at merchandise and move on if it’s not something they really want. They are less deterred by the economic downturn than most buyers. 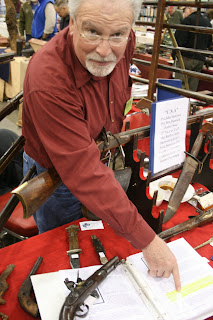 Research and authentication are important for high-priced tickets.

Hayes had a 1-inch thick folder with documents, a history and a notarized family letter ensuring the authenticity of an 1836 flintlock pistol used by Confederate Brig. Gen. Porter Alexander.

Hayes bought the piece from another dealer, and of course, wants to make some money on the sale. “You have to pay for what it’s worth.”

Sellers in Dalton say the event is like any other retail operation.