New walking trail at 'Gettysburg of the West'

Unlike states in the East, New Mexico isn't known for its Civil War battlefields, of which there are less than a handful. 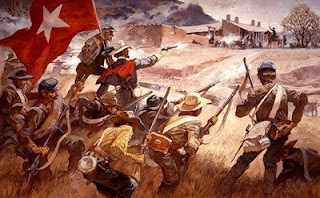 But there is at least one site memorializing an important fight.

Union soldiers stood their ground against Confederates at a pinch along the Santa Fe Trail known as Glorieta Pass, resulting in an 1862 battle that historians often refer to as "the Gettysburg of the West."

Until recently, public access to the Civil War battlefield was limited. But earlier this year, the National Park Service opened a new 2-mile trail that allows visitors to explore the area.

• Read more about the battle, trail
Posted by Phil Gast at 8:32 AM