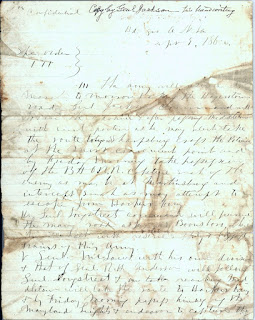 The copy of the order made for Confederate Maj. Gen. Daniel Hill, on loan from the Library of Congress, will be display at the battlefield visitor center from Aug. 1-Oct. 31.

The hill on the Best farm where the lost order was discovered was a key Confederate artillery position in the 1864 Battle of Monocacy.

Lee issued the order September 9, 1862, during the Maryland Campaign. It outlined his plans for the Army of Northern Virginia during the campaign and divided the army into four sections to secure garrisons and supplies, and capture Federals at Martinsburg, Harpers Ferry, and Boonsboro, while Lee went to Hagerstown. 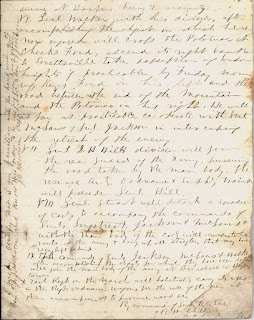 According to the National Park Service, copies of the orders were written for each of Lee's commanders. One of the orders, written for Hill, was lost. Hill had already received his orders from Major General Thomas Jackson, (his immediate superior until the next day when he would have his own command), thus did not realize another order had been sent to him from Lee's camp. In fact that order was lost. How it was lost remains a mystery.

On Sept. 13, 1862, members of Company F, 27th Indiana Volunteer Infantry discovered the orders in an envelope with two cigars.

Here is the LOC's summary of the order's significance.

"Fol;owing his tactical success in the Battle of Second Manassas (Second Bull Run, August 28–30, 1862), Robert E. Lee led his Army of Northern Virginia into western Maryland to secure supplies and recruits -- and in the vain hope of winning its people to the Confederate cause. His Special Order No. 191, popularly known as “Lee’s Lost Order,” was discovered by Union troops at an abandoned Confederate campsite near Frederick and turned over to McClellan. Armed with the knowledge that Lee had divided his forces, McClellan realized he could destroy Lee’s army piece by piece. However, once again McClellan’s overly cautious nature proved his undoing, giving Lee enough time to reconcentrate his forces."

While McClellan subsequently stopped Lee at Antietam, many historians contend he failed to fully utilize intelligence gleaned from the lost order.