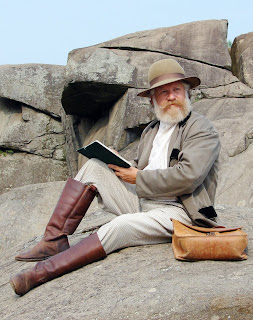 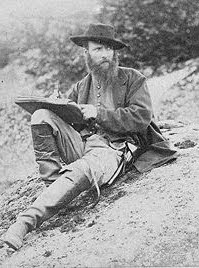 From his felt hat and bewhiskered face to his leather haversack and boots, Rapp projects a living image of the famous Civil War sketch artist -- minus the English accent.

For more than 10 years, Rapp, 55, of Cornelius, N.C, has researched and portrayed what some consider the greatest illustrator of the war.

Rapp takes school construction paper and weathers it to approximate the paper and colors used by Waud.

“I put it out in the sunlight to make the same shade,” he says.

Waud (pronounced WODE), saw it all with the Union’s Army of the Potomac -- from the bright-eyed optimism in 1861 to Gen. Robert E. Lee tired ride (below) following his surrender at Appomattox Courthouse in southern Virginia.

The artist, most famous for his illustrations used in Harper’s Weekly, was known for his bravery and quality of work.

Because reproducing photographs was in its infancy, Waud and other illustrators principally brought the action and army life to the public.

Why was Rapp, an 8th grade American history teacher in Charlotte, drawn to Waud specificially?

“The immediacy of his sketches,” Rapp says. “The freezing of action.”

“Here is a guy who was on the front line,” he added. 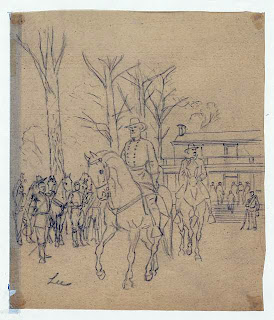 As a member of the Bohemian Brigade, a confederation of living historians doing impressions of Civil War correspondents and artists, Rapp has done significant research into the journalist he portrays.

“We are so far off the edge,” Rapp says of his Bohemian brothers. “Most of the people [who come to events] don’t know about artists. I am telling them something new.”

Rapp made several trips to the Library of Congress, which has a large collection of Waud’s works, and as a registered researcher he has held originals.

“It is chilling,” says the native of Shoemakersville, Pa., north of Reading. “It is thrilling. That this piece of paper was at Gettysburg.”

Rapp also has researched Alfred’s brother, William, a fine illustrator in his own right.

Other research includes a study of “Alfred E. Waud: Sketch Artist” by Frederic E. Ray and Philip Van Doren Sterns’s “They Were There,” a look at Waud and other Civil War journalists promoted by newspapers and weeklies of the time as “Special Artists.” 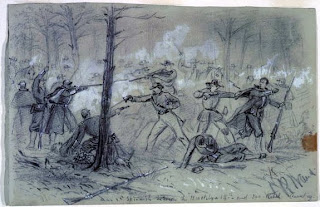 The four-volume, “Battles and Leaders of the Civil War” was the first significant Civil War book to portray the effort of these gregarious chroniclers.

Rapp, who sold RVs before switching to teaching, makes a reference to a Waud sketch (above) of the skirmish between the 14th Brooklyn and Confederate Cavalry at Antietam on Sept. 17, 1862.

“You can see the action going on,” he says.

Rapp, who includes sailing among his hobbies, has a particular fondness for doing his Waud impression at Gettysburg.

“Waud’s Rock” is the site of famed Civil War photographer Timothy O. Sullivan’s image of the jaunty artist, who was born in England in 1828. 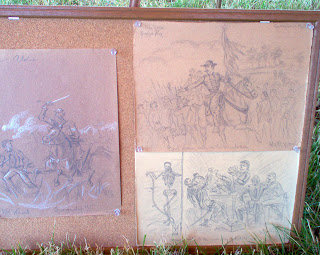 Most of the time, Rapp sketches likenesses (right) of Waud’s work, but he sometimes does extemporaneous sketches for the public and friends.

He enjoys educating individuals about the amazing experiences of such artists.

“I’m a pretty good artist. Nothing fancy. I try to reproduce his work faithfully.”

Rapp does not sell his work. “I do it for the enjoyment and to educate.”

Some years, Rapp may go to 10 battle re-enactments or living history events. In 2011, so far he is going to an event in Rockford, N.C., a 19th century plantation and a meeting of a Sons of Union Veterans of the Civil War camp.

“People want to know who I am and why I am dressed like that,” he says.

Readers had plenty of material during the war, including the New York Illustrated News and Frank Leslie's Illustrated Newspaper. Rapp totes copies of Harper’s Weekly, which was read by about 1.5 million people each time it was printed. 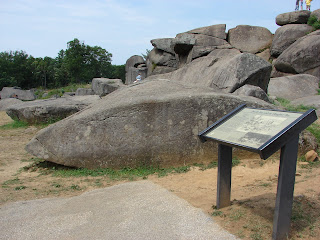 Among Waud’s contemporaries were Theodore R. Davis and Edwin Forbes. Forbes was “better artistically but the immediacy and intimacy of Waud was different,” says Rapp.

Civil War photos were limited generally to camp life and scenes after battles.

“If you want to know what war looked like you have to look at the sketches,” says Rapp.

Upcoming in Picket: A deeper look at Waud's work, why he is important and his legacy. We'll look at collections in Washington, D.C., and New Orleans and will speak with curators.