A weekend visit to Fort Pulaski, fallen gateway to Savannah

Wearing a blue period military cap, volunteer guide John Meier does his best to have Fort Pulaski visitors prepared when they cross the drawbridge into the well-preserved fortifications. 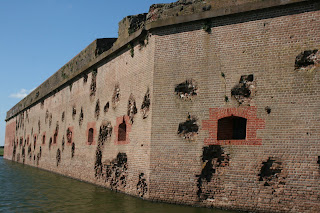 I chatted briefly Sunday with Meier about typical questions the curious have when they come to the fort, 15 miles east of downtown Savannah.

Pulaski, made with millions of bricks, is known for representing the end of an era. When the Civil War began, the fort was considered a “spectacular” defensive structure.

But Union rifled guns fired from over a mile away reduced a good bit of the fort to rubble, leading to Col. Charles Olmstead’s surrender in April 1862. 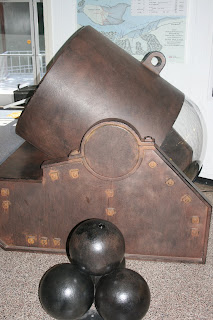 Meier said folks often are surprised at how young Olmstead was. He was only 25 when he took command of the fort in 1861. The young soldier was haunted for years by his decision, but later said it was still the best possible given that a direct hit to the magazine would have blown up Pulaski.

“That the fort could and would be absolutely destroyed by the force of the enemy was a demonstrated fact . . .” he wrote.

Other visitors don’t realize how difficult it would have been for the Confederates to retake the fort over the next three years of the war.

We spent a couple hours at Pulaski, first walking by its cisterns than taking a gorgeous trail out to Cockspur Lighthouse, which was built in 1856. The structure escaped damage during the fateful hours of the Pulaski bombardment.

The fort is offering two special events in November and December. 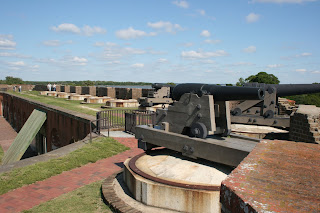 Veterans Day (event is Nov. 7-8): Re-enactors from the 48th New York Volunteer Infantry will be on hand. They will give demonstrations of military and camp life. A special military salute to veterans will be offered at 4 pm Saturday. The 48th was garrisoned at Pulaski after its fall. Regular admission of $3 per person.