• More photos from the exhibition

I could kick myself for having missed out so long on a great thing. 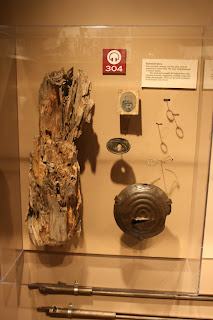 With this in mind, I headed down to Buckhead this morning and braved school groups to soak in the experience.

The 1,500-piece collection is absolutely superb. And while I thought the theme would be heavy on the Southern perspective, I was surprised to see an approach that touched on all sides.

Father and son Beverly M. DuBose Jr. and Beverly M. Dubose III spent years acquiring these historical gems before donating them to the Atlanta History Center, which opened the exhibit 15 years ago.

There’s the sword that presented by troops to Irish-born Confederate Gen. Patrick Cleburne. It was rescued from a junk shop and was eventually bought by the DuBoses.

The DuBoses were especially proud of a ship’s log from the Confederate raider Shenandoah and a Medal of Honor won through the effort of U.S. Colored Troops. 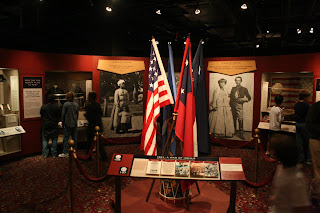 The exhibit is built around the artifacts, and is heavy on the military. But it also provides a human touch, soberly emphasizing the toll of the war, including the deaths of 50,000 Southern civilians to disease and hunger.

Display cases contain coats and other items worn by soldiers killed in battle. One features a specially made Union uniform made for a small boy after his father died.

A light-colored coat belonging to a Confederate and a Union officer’s sword (below) are juxtaposed. They belonged to soldiers who died minutes apart at the Battle of Peachtree Creek in 1864.

The relics in the first half of “Turning Point” are close to each other, impressing the visitor with the sheer volume and scope of the collection.

The exhibit opens up in the second half to show a re-created parapet, flags, the Sherman wagon and artillery pieces. 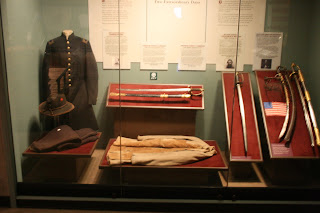 On the lighter size is an original autographed (yes, autographed) piece of hardtack, the tough cracker that was a staple of soldiers.

I strongly recommend the free audio tour, which is comprehensive and often provides a back story on a particular item.

School tours are held between 10 a.m. and noon. I did not mind the distraction; it was gratifying to see the Civil War story being told.

Visitors are asked to share their thoughts on the exhibit.

“The Civil War was very hard and sad,” one youngster wrote.

I spent a little more than two hours at “Turning Point”, which concluded with a film and display asking, “What does the Civil War mean to us?” 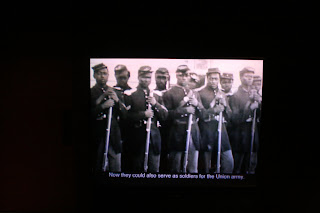 For some it conjures painful memories. Some find it irrelevant. Others experience continued racism. We now have a stronger central government, for better or worse. Others may feel renewed Southern pride.

There is, of course, no one answer to the question.

But “Turning Point” poses questions that should stay with a visitor after he walks out into the sunshine.