Senior conservator Elsa Sangouard has worked inside the USS Monitor’s massive turret and on the gun carriages that held its two 11-inch Dahlgren guns.

While these and other iron pieces Sangouard has handled tell the story of the famed Federal ironclad’s instruments of death, a painstakingly conserved and reassembled sailor’s coat is her favorite artifact.

“Anything working with sailors is extremely touching. The coat represents the last minute of the ship and the drama for the entire crew,” she said.

Half of the delicate artifact late last year went on display in the replica captain’s stateroom at the USS Monitor Center of The Mariners’ Museum and Park in Newport News, Va.

The tailor-made coat came out of the water when the turret was lifted in 2002. Officials said crew members likely threw off heavy coats as they scrambled off the USS Monitor during a terrible storm near Cape Hatteras, N.C., on Dec. 31, 1862. This coat was the only major item of clothing found in the wreck.

Visitors can gaze upon the reconstructed coat (click photo to enlarge), its six panels lying in a low-light, climate-controlled display case. Conservators dared not try to hang the artifact on a mannequin.

“All of the wool is in pretty good shape, but it is very fragile,” said project manager Will Hoffman. “If you can hang it, that means all the weight on the fiber is hanging off the individual fibers.”

The coat, even after these years, still wears a shroud of mystery: Who did it belong to? Was it one of two sailors whose remains were found in the turret? One of the 47 men who safely made it off the ironclad? Did an officer or enlisted man wear it?

Officials say it took a real team effort over more than a decade to conserve and display the item. For Sangouard, working with the tattered garment’s 137 pieces was like working on a jigsaw puzzle.

Coat’s design appears to be a ‘one off’ 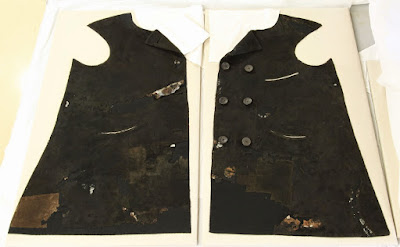 The “hybrid” dark blue, double-breasted coat was modified to serve as part of a U.S. Navy uniform. It’s a mix of a standard sack coat in the front, with a fitted, vented back of a classic frock coat.

Hoffman and Sangouard told the Picket they are puzzled by the coat design and its rubber buttons. The Novelty Rubber Co. produced the latter, using a Goodyear patent.

An officer likely would have used copper-alloy buttons. But why would an enlisted man go to the trouble of procuring a custom-made jacket, they ask.

John Quarstein, director of the center, told History Net that the garment might have belonged to a warrant officer such as a master’s mate, boatswain’s mate, gunner or quartermaster.

HistoryNet said one candidate is enlisted sailor Jacob Nicklis, one of 16 crew members lost with the USS Monitor. His father was a tailor in Buffalo, N.Y.

The remains (above) of the merino wool coat were found largely in a pile in the turret’s organic and iron sediment. While conservators weren’t positive what they had, they could make out collar fragments and a button hole. Cotton threads that held the panels together had dissolved after decades in saltwater.

The two front panels of the coat were largely intact, while much of the rest was in pieces. About 80 percent of the garment survives.

Sangouard, who joined the project five years after the turret was lifted, said smaller pieces were taken out of cool storage in 2009 to begin the conservation process.

Conservators found the appropriate methods for cleaning and soaking the coat in solution. That took more than a year.

Despite the cleaning, some iron corrosion caused by turret tools remain on some portions of the coat; in one case the fabric bears the shape of a tool handle.

Putting the puzzle ‘back together’

Once the cleaning was completed, Sangouard used transparent paper to draw all the fragments.

“We needed to document the exact size of each fragment before drying them, just in case there was going to be a size change,” she told the Picket.

The conservator scanned the transparent paper and retraced the shapes, using Adobe Illustrator. She then reduced the scale of all pieces.

“Once all the parts were smaller and digitized (smaller but still very accurate in shape), I worked on my PC like I would have at home on a jigsaw puzzle.

“Without taking distance from the object and looking at all the parts from afar, only the main panels could be placed in relative position to one another. Using Illustrator helped find a fair amount of smaller connections that were really difficult to see when looking at the object itself.

“In other words, tracing the pieces helped document the object before drying it, but also helped putting the puzzle back together.”

The coat eventually was sent to textile conservators in Richmond who adhered the pieces to the exhibit panels. The museum’s Bronze Door Society contributed $20,000 to the project.

To whom did the coat belong?

The coat will help further the museum's goal of bringing the human component to a story of the innovative ironclad that tangled with the Confederacy's CSS Virginia in nearby Hampton Roads in March 1862.

The USS Monitor, while smaller, was more nimble than the CSS Virginia, and the two vessels fought to what many consider a draw.

Officials would like to know who wore the jacket. They know the weight and sizes of most of the crew. Sangouard said the man was thin and not 6 feet tall.