Landscape painters Franz Biberstein, Bernhard Schneider and Wilhelm Schroeter, no doubt, would be thrilled that their monumental piece of art will be made whole again.

Returning to the Atlanta Cyclorama in its upcoming restoration and move to a new home is a vertical strip 6 feet wide and 50-feet high, trimmed long ago so that the once-traveling painting could fit into its current building at Grant Park in Atlanta. And there’s more: The Cyclorama will get back an 8-foot swath of sky around the 371-foot circumference.

For F.W. Heine and August Lohr, who worked out of Milwaukee in 1885 and supervised the 22-member German team, the Cyclorama’s presentation at the Atlanta History Center will restore the visual perspective they intended.

Rather than hanging much like a shower curtain, the painting depicting a critical moment during the July 1864 Battle of Atlanta will be attached in a hyperbolic, or hourglass, shape, meant to imbue a 3-D effect.


For decades, visitors at Grant Park sat on a revolving platform, seeing only one section of the panorama at a time.

When the new Cyclorama building at the AHC opens in 2017, they will stroll up to the simple, circular platform and slowly take the whole experience in.

“You can’t see where it ends,” Gordon Jones, senior military historian and curator at the AHC, said of the new setting. “You are immersed in the scene.”

A witness to Civil War history

Cycloramas, or panoramas, once were wildly popular. Their heyday, peaking at about 1890, was before film and television became the predominant form of visual entertainment.

The Atlanta Cyclorama (its twin version no longer exists) was created during that boom as a tribute to the Federal victory at Atlanta. It eventually settled in Atlanta in 1892 and had various homes until the building at Grant Park opened in 1921.


The painting benefited from research conducted by its creators. They interviewed veterans of the battle and residents of the neighborhood a couple miles east of downtown Atlanta. They studied the landscape from a 40-foot wooden tower and referred to military maps.

The Cyclorama’s focal point is the Troup-Hurt House, where Confederates briefly broke the Union line before they were repulsed.

This bright spot gave Southerners a means by which to connect to the painting.

“It survived (by) being enshrined in a building in Atlanta as a symbol of the Lost Cause,” Jones recently told the Picket.

The relocation and restoration of the painting – along with accompanying diorama of plaster figures, artillery pieces and re-created natural elements – is a large undertaking. The Cyclorama closes after June 30 for the work to begin.


The Atlanta History Center is in the midst of a construction project. A grand façade will usher visitors into the new Allen Atrium and exhibits that will have glass fronts and a feeling of connectiveness. A bistro/café will be located near the Cyclorama.

“It is about being more open, accessible and welcoming,” said Hillary Hardwick, vice president of marketing communications.

Jones and others at the AHC have been busy researching other Cycloramas, hiring the painting restoration company and acquiring or negotiating new exhibits.

During our interview, Jones thumbed through photographs of a few panoramas, many of which are in Europe. 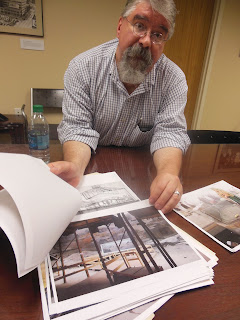 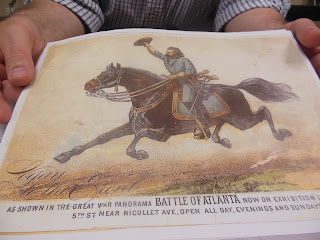 According to the International Panorama Council, about 96 360-degree or 180-degree works or art currently exist in 26 countries. Many of them, interestingly, are in China (a semi-circle depiction of a village on the Yellow River was painted in 2014).

The cycloramas/panoramas tend to feature great moments in history (Waterloo and Gettysburg, for example) or great natural wonders. Twenty-five of those were created before World War II. The council told the Picket it did not know which venue is the most visited today.

Jones said the Atlanta Cyclorama, made with a Belgian linen backing, is “more intact” than the Gettysburg Cyclorama and a Jerusalem and crucifixion of Christ panorama in Quebec.

The AHC plans to follow other locations’ lead in allowing visitors to venture down to see the rigging and construction elements of the Cyclorama – to see what’s “behind the curtain.”

AHC patrons at certain times will be able to witness ongoing restoration before the new wing officially opens.

But first comes an assessment of the painting at Grant Park and the beginning of restoration later this year. A crew will have to first remove the diorama, including its 138 figures from the 1930s that will be restored.

“Once we are facing the painting we will know what more it needs,” said Jones.

The crew will stabilize the painting and roll it up – very carefully – into two to four rolls.

An ambitious 1979-1982 restoration led by Gustav Berger included the application of epoxy to join the 14 panels. The crew hopes it does not have to cut that adhesion, said Jones.


Another wall or two will have to be busted down for the move of the locomotive Texas, which took part in the Great Locomotive Chase north of Atlanta in 1862.

Hardwick said the AHC plans to document all aspects of the move and restoration, with a focus on communicating through social media.

The little locomotive that could

AHC officials are excited about being able to show off the Cyclorama in the context of their extensive collection of Civil War artifacts, exhibits and documents.

Patrons, before walking to the viewing platform, will be able to see Civil War period photographs and maps.

They’ll also be drawn to the Texas, which was a transportation workhorse for the city for 50 years. “It was building Atlanta,” Jones said of the locomotive. “Here is the artifact that most symbolizes the city.”

The Texas was back in the headlines a couple months ago when word came that politicians and officials in Cobb County and Kennesaw, northwest of Atlanta, indicated they would tried to have the locomotive moved to the Southern Museum of Civil War and Locomotive History, which houses the General, which was chased by the Texas crew. They contend the Texas may belong to the state. Jones and Hardwick said the AHC has documentation proving it was given to the city.

Artist-historian Wilbur Kurtz found the locomotive in a rail yard and it was donated in 1908 to Atlanta, they said.

Hardwick said the story of the Texas, unlike that of the General, will be broader, with a focus on the growth of Atlanta and its critical railroad infrastructure. “The General was lauded as a relic. The Texas was forgotten,” said Jones.

The Texas is in pretty good shape, with some rust damage on the tender. Many of the parts have changed over time, and it was repainted by a Kurtz-led restoration during the 1930s.

“We have to present this as a locomotive whose parts have changed over time,” said Jones. 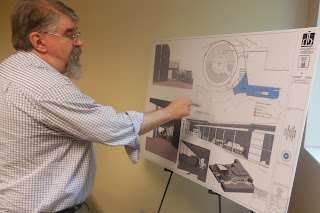 A wider Atlanta story to be told

AHC officials know visitors are like pinballs, swiftly moving from place to place. So they need to keep them interested.

Visitors will be able to use their smart phones to scan certain parts and figures in the painting for additional information. Curators will reintroduce an interactive display that will allow people to zoom in on Atlanta’s fortifications and streets during the battle. A Google map overlay gives you the modern street perspective.

Officials want visitors to the Cyclorama wing to have a somewhat nostalgic feel, perhaps through old advertising banners for panoramas.

The painting area will have more consistent lighting than at Grant Park, but there will be no skylights. And while the painting may appear smaller because of its more open setting, the visitor can stay as long as she or he likes to appreciate the creativity and innovation that went into its production.


Like many such institutions, the AHC in recent years has used its buildings and spaces for entertainment. Receptions will be held on the mural platform, proving a dramatic backdrop.

A new sound-and-light production likely will be played only once an hour. It will be an “enhancement, not an experience,” said Jones. The top floor will focus on the Atlanta Campaign, including a sword and revolver belonging to Union artillery Capt. Francis DeGress, whose battery held a critical part of the line on July 22, 1864.

But there’s a bigger picture beyond the details of the exhibit details, officials said.

While audiences years ago “were hungry to see what happened in the late unpleasantness 20 years before,” said Jones, today’s Atlanta is a much different place, with an appreciation for diversity and moving beyond pining for the Lost Cause.

Jones cited increased visits from people from Asia. “They think history is cool. It is the story of their new country.”

The AHC wants to tell a fuller story of Atlanta’s history and the story of the painting’s artists and the art form, and how the Cyclorama was interpreted over time.

The addition of the interactive map kiosk adds to the appeal – people can see the battlefield’s area and where they live, shop and play today.

Jones said the AHC wants patrons to go home and do further research.

“This experience is a good start.”