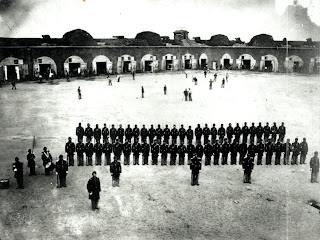 Behind them, almost serving as a backdrop, other soldiers play a game that transcends geography and stations in life.

In 1862, months after the Savannah, Ga., fort fell to Union forces, Henry P. Moore took one of the earliest surviving photos of a baseball game.

Three images of regimental companies and ballplayers (ballists) are the most remarkable of the many photos taken of the 48th during its yearlong garrison duty at Pulaski.

Staff members and volunteers at Fort Pulaski National Monument keep that baseball tradition alive with pickup games and the recently inaugurated "Rumble on the River" (above) between Pulaski and Old Fort Jackson, a Confederate defensive fortification operated by the Coastal Heritage Society. 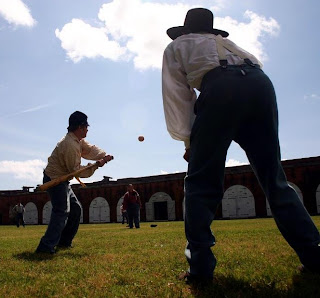 Park ranger Joel Cadoff is a hurler (pitcher) and outfielder for the Pulaski team, which competes on the very parade ground where members of the 48th New York drilled and played the game.

"The hardest thing is forgetting modern baseball," said Cadoff, 35, a Massachusetts native and Boston Red Sox fan. "It almost seems like a sandlot game. There are certain rules that are very different."

There are no gloves or called balls. Hurlers throw the ball underhanded. A striker (batter) is called out if the ball is caught in the air or on one bounce.

For purposes of discussion and good-natured bantering, the Pulaski team is aligned with the North, while Old Fort Jackson represents the South.

Not that the uniforms make it easy to pick out the sides. The Savannah Republican Blues and other Confederates units, particularly early in the conflict, also wore blue.

Allowances will be made for steamy summer weather and field conditions.

"We will wear sky blue trousers and our blue forage caps. Especially in July we won't wear the blue sack coats," said Cadoff. "We are not wearing brogans. We are wearing modern footwear. The parade ground is not even, with dips and ruts."

Brian Lee, site administrator and hurler-catcher for Old Fort Jackson, recently wrote "Baseball in Savannah," a pictorial history of teams and athletes that have played in the city since the Civil War. The current minor league team, the Sand Gnats, are affiliated with the New York Mets.

Baseball got its start in the Northeast, with several variations and sets of rules adopted before and during the Civil War. Southern troops had little familiarity with the sport and there is no evidence it was played at Fort Jackson. 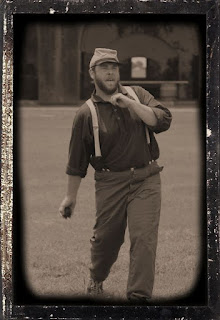 "You would have seen Union troops in down time entertaining themselves," said Lee (photo, left). "They had the upper hand. They weren't the ones being besieged. They had a little more free time."

The rivalry provides an opportunity for both venues to mark the sesquicentennial of the Civil War and educate patrons about soldiers' and sailors' lives. The game is played with decorum, and participants of both genders are expected to behave like gentlemen.

Unlike Pulaski, the game at Old Fort Jackson is played outside fortifications on an old rice field. The grass is cut shorter, ideal for scoring runs.

Old Fort Jackson is close to downtown Savannah but a bit off the beaten path. The submerged wreckage of the Rebel ironclad CSS Georgia lies nearby in the Savannah River.

Attendance has been up the past couple years, said Lee, averaging between 40,000 and 50,000 annual visitors. Fort Jackson has a longer history than Pulaski, including service during the War of 1812. 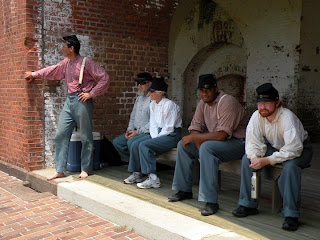 Mustered in Brooklyn, the 48th New York served more than a year at Pulaski before being sent to Hilton Head, S.C., and on to the bloody fighting at Battery Wagner near Charleston, where it suffered heavy casualties.

Brigade commander Col. William Barton is remembered for the Barton Dramatic Association, a theater group that entertained the troops at Fort Pulaski.

"They had professional actors who are in the army and they put on some well-received productions," said Cadoff.

Among the patrons who saw productions outside the walls were Union officers and enlisted men stationed at Hilton Head and Port Royal, S.C.

The 48th contingent included a marching band (photo, below).

"The photos are being taken of individual companies," Cadoff said of the three images that contain the baseball players. "These guys aren't thinking guys will be paid millions of dollars (in later years) to play this game." 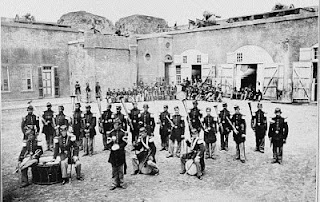 Both Cadoff and Lee are confident of victory on July 1.

Coming soon: A closer look at the Vintage Base Ball Association and one of its teams, the Huntington (Indiana) Champion Hill Toppers, named for a Civil War battle.