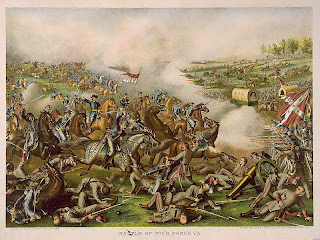 The series kicks off May 19 with a free walking tour, "Follow the Cavalry," at the Five Forks Battlefield, one of four park units stretching about 37 miles.

At Five Forks (above), often called the "Waterloo of the Confederacy," Lee ordered Maj. Gen. Georgia Pickett to hold the vital crossroads and railroad line at all hazard. 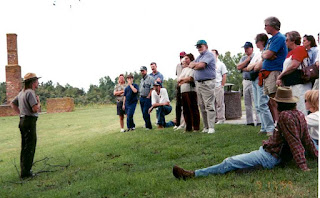 "We're trying to reach out to the audience working during the day," he said. "We want to open their eyes to the scale of events."

Here's the rest of the schedule:

All programs begin at 7 p.m. Dress appropriately for the weather and bring water. Call Petersburg National Battlefield at 804-732-3531 for more information. Illustration, Library of Congress; NPS photo, Jimmy Blankenship providing a tour by the remains of the Taylor House dependency at Tour Stop 7 at the Eastern Front.

• Petersburg National Battlefield
Posted by Phil Gast at 10:27 AM