As a boy growing up during the late 1950s and 1960s in southwest Atlanta, Marc Stewart didn’t have to go far to find treasure. 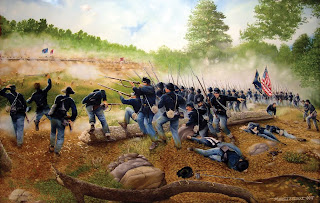 He put a metal detector he received to good use.

After a career in the U.S. Navy, Stewart now is an aviation artist, depicting planes locked in combat over the Pacific Ocean during World War II.

One, “The Battle of Utoy Creek,” depicts Union soldiers from Kentucky attacking a hill held by Kentucky Confederates. 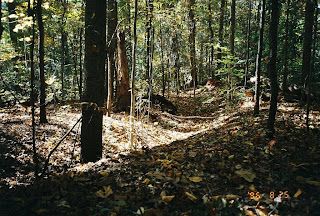 “That was right behind our house,” said Stewart. “I put the trenches where I knew they were on the hill.”

The neighborhood along Cascade Road was a great place to grow up, the artist said.

“I don’t think anyone really knew about it,” Stewart told the Picket.

He was referring to the Battle of Utoy Creek during the Atlanta Campaign.

With the exception of a few historic markers along busy roads, a visitor won’t glean much Utoy Creek battle history and context. 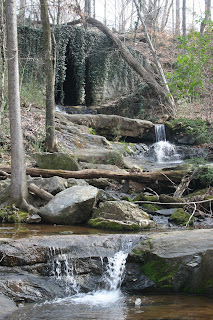 Atlanta’s gorgeous Cascade Springs Nature Preserve (left) has no interpretation of the Aug. 6, 1864, battle that occurred among its rolling hills and trails. One sign warns against disturbing the soil for relics.

About a mile to the northeast, Beecher Hampton Nature Preserve, which includes a bike trail and Lionel Hampton Park, makes no mention of an array of rare Federal trenches (second photo, above).

“It is as good a set of trenches as I have seen anywhere,” said Barry Brown, heritage tourism specialist with the Georgia Department of Economic Development.

The trenches, hunted out for relics, continue toward the southwest corner of Westview Cemetery.

Brown, who then worked for the Georgia Civil War Commission, was awarded the 2007 Governor’s Award for efforts to help preserve Civil War sites. From 2001 to 2003, he coordinated the acquisition of 100 acres of historic land along Lionel Hampton bike path and Utoy Creek.

Co-author Brown included Stewart’s battle scene in the updated “Crossroads of Conflict: A Guide to Civil War Sites in Georgia,” which will have a second edition this summer.

Utoy Creek is an Atlanta battle of which few have heard.

The seminal “Battles and Leaders of the Civil War” makes scant mention. A National Park Service (NPS) summary makes no guess at casualties.

Regardless, the siege of Confederate lines made for at least two wonderful stories.

First, a brief history of the battle.

By early August 1864, Hood has suffered defeats at Peachtree Creek, Atlanta and Ezra Church, not far from Utoy Creek.

Union Maj. Gen. William T. Sherman had failed to get around Hood’s left flank at Ezra Church. He wanted to extend his right flank to hit the railroad between Atlanta and East Point. 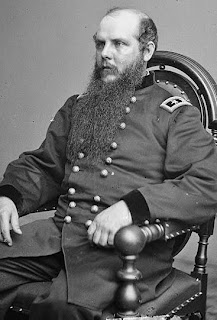 He transferred Maj. Gen. John M. Schofield’ s Army of the Ohio from his left to his right flank and sent him to the north bank of Utoy Creek, according to the NPS battle summary.

After movements Aug. 2-5, Schofield (right) had to regroup his forces.

“The delay allowed the Rebels to strengthen their defenses with abatis, which slowed the Union attack when it restarted on the morning of the 6th. The Federals were repulsed with heavy losses by Bate’s Division and failed in an attempt to break the railroad,” according to the NPS.

On Aug. 7, the Union troops moved toward the Confederate main line and entrenched. Here they remained (photo below, trenches) until late August. Sporadic fighting occurred in the area for a couple more weeks.

Eventually, Sherman forced Hood to evacuate Atlanta after a loss at Jonesboro, south of Atlanta. The Yankees seized the railroad, cutting off Hood’s supply line.

Historians and experts somewhat disagree on the importance of Utoy Creek. 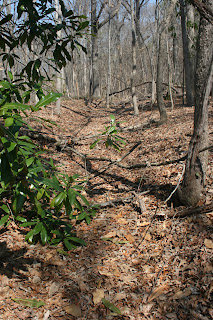 “Union troops charged uphill at well-entrenched Confederate lines and didn’t make it,” said Brown. “Sherman didn’t write it up in his memoirs.”

That wasn’t unusual. Sherman didn’t write much either of a costlier setback at Kennesaw Mountain six weeks earlier.

“Utoy Creek was a Federal defeat, but it was a small battle by any measure,” said Charlie Crawford, president of the Georgia Battlefields Association.

Maj. Perry Bennett, an Army historian with the 335th Signal Command in East Point, believes the battle was a bigger deal.

“The last 35 years I have been researching this,” said Bennett, who grew up in Atlanta and says he found three cannonballs in a Utoy Creek tributary when he was 12.

“Utoy Creek is described as a skirmish,” said Bennett, president of the Utoy Cemetery Association, which maintains a cemetery containing graves of Confederates who died in the area. The cemetery adjoins a church that served as a Confederate hospital during the battle and Federal siege. 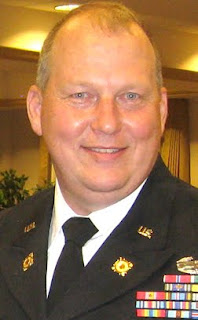 “When you read the Official Records, your eyes become open,” said the major, who is writing a book manuscript on the topic. “This was a significant battle.”

Bennett is critical of Schofield, who contends the general had “the short man’s complex” and incorrectly blended units of the 14th and 23rd corps before the Aug. 6 attack.

“Sherman was exasperated,” said author and historian Stephen Davis. “The Confederates could extend the line as fast as the Federals could envelop it.”

Opposing Schofield’s much larger force in the Cascade nature preserve were about 3,600 Rebels on “no-go terrain.”

Instead of attacking, as they did in July, the Confederates sprang a trap on the Union troops, according to Bennett, forcing the forces in blue to withdraw after heavy fighting.

Bennett numbers the Union dead at 850, with about 1,000 wounded. Prisoners and regimental colors also were taken. About 35 Confederates were killed, and several hundred wounded, he added.

According to the GBA’s Crawford, Confederate casualties were about 30, Federal about 300. “The Federals probed the ever-lengthening Confederate line for several days in early August, with total Federal casualties for 4-7 August being around 815, Confederate about 385,” he told the Picket.

Much of the Utoy Creek battlefield sits in a verdant section of Atlanta featuring upscale neighborhoods and parks.

I walked the Cascade Springs Nature Preserve, where dog walkers roam trails. A spring house greets visitors in a ravine. 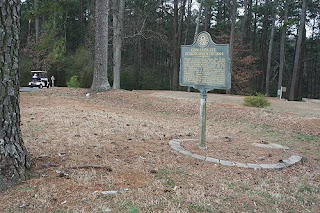 Portions of the battlefield and entrenchments also lie beneath John A. White Park and Greenwood Cemetery. A marker denotes a site on the 17th tee of “Tup” Holmes Golf Course off Campbellton Road (photo, above).

Willis Mill Road, named for a family that lived in the area during the Civil War, runs just east of the nature preserve.

Davis has researched a “bombproof” or “dugout” the family huddled in during the Atlanta siege and Battle of Utoy Creek. He determined it was located east of the nature preserve.

Davis studied notebooks and a ledger, kept at the Atlanta History Center, produced by Wilbur George Kurtz, a well-known artist-historian.

In 1932, Kurtz interviewed an older woman who recalled the bombproof.

“Mrs. D.E. Herren says that her father and some of the neighbors decided that to refugee before the advance of military operations would entail great hardships—certainly a loss of property, and the question of where to go and what to do when they got there, seemed unanswerable,” Kurtz wrote. “Deciding to weather the storm, they thought of the bombproof cellar, and built this shelter some days before the fiery blasts began sweeping across the fields.”

Up to 26 people huddled inside at the height of the fighting in western Atlanta.

“It was a big hole in the ground,” said Davis, whose works include “Atlanta Will Fall: Sherman, Joe Johnston, and the Yankee Heavy Battalions.” 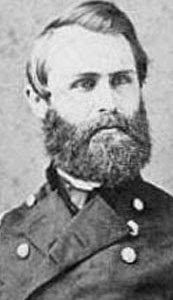 Jacob Dolson Cox (left), a Union general, referred to the Willis family as the Wilsons in his memoir.

Cox on Aug. 11, 1864, wrote “In this bomb-proof four families are now living, and I never felt more pity than when, day before yesterday, I looked down into the pit, and saw there, in the gloom made visible by a candle burning while it was broad day above, women sitting on the floor of loose boards, resting against each other, haggard and wan, trying to sleep away the days of terror, while innocent-looking children, four or five years old, clustered around the air-hole, looking up with pale faces and great staring eyes as they heard the singing of the bullets that were flying thick above their sheltering place.”

Crawford and Bennett related another interesting story regarding the battle.

According to Crawford, the surviving Federal trenches may have been the headquarters for the 14th Army Corps, commanded by Brig. Gen. John McAuley Palmer.

“Palmer said he wouldn’t submit to Schofield’s orders because of date of rank,” Crawford said. After a flurry of messages among Palmer, (Maj. Gen. George) Thomas, Schofield, and Sherman, Palmer resigned and went back to Illinois. It’s a fascinating incident that influences the Utoy Creek battle.” 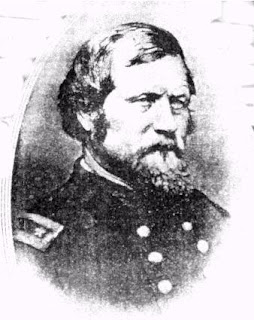 “Palmer was not a West Pointer, which also played into the argument,” said Crawford.

“It goes to tell you how screwed up Schofield’s plan was at Utoy Creek,” Bennett said about the flap, adding Schofield sent orders to Palmer’s subordinates during the faceoff.

Bennett said he devised staff rides for Army officers to study the tactics at Utoy Creek, including trench operations.

The conclusions: Mixing corps cost the Union unit integrity, Schofield did not have good intelligence on the enemy and Sherman goaded him to make an ill-fated attack at Utoy Creek.

“Never call an attack an attack if it is not successful.”